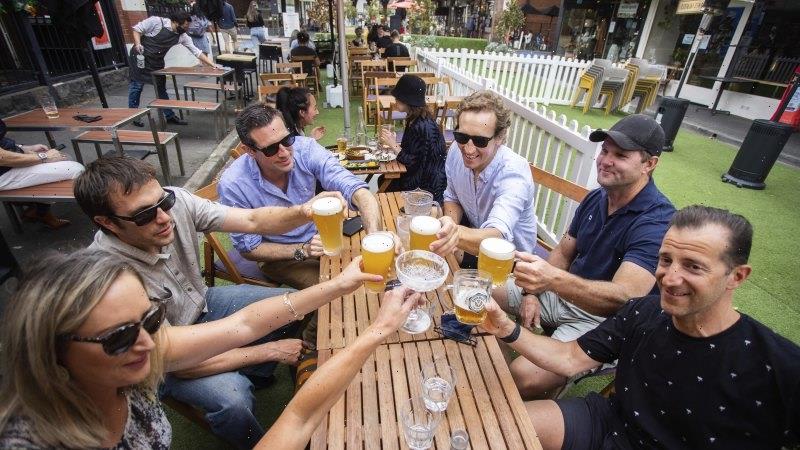 Newly liberated Melburnians may be granted more freedoms in less than a week, with an emotional Premier Daniel Andrews flagging a further easing of restrictions and incentives for people to return to the city once the state hits the 80 per cent double-vaccinated mark.

As Melbourne’s sixth lockdown ended on Friday, Mr Andrews said he was “grateful and proud” of the state as Victoria’s double-dose vaccination rate soared past 70 per cent and the percentage of those over 16 who had received first doses topping 90 per cent. 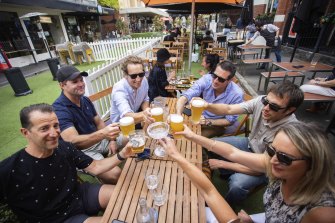 A group of friends gather to celebrate the easing of restrictions at Yarraville on Friday.Credit:Paul Jeffers

When the state reaches 80 per cent double-vaccinated, Victorians will be allowed to travel between Melbourne and regional Victoria, retail will reopen and masks will no longer be required outside. The road map still encourages people to work from home.

However, the Premier said the speedy uptake of the vaccine would not only trigger a new round of freedoms at 80 per cent, it could include fresh incentives and rules to encourage workers to return to offices and visit the city for dining and shopping.

Importantly, for those resuming life after 77 days under restrictions, Mr Andrews said Victoria’s strong vaccination rate meant there would no more state or citywide lockdowns.

“People have gone and done what we asked them to do. And now we’re delivering what we said we would do,” he said.

With just nine weeks until Christmas, Mr Andrews said he wanted Victoria to have “as few rules as possible” by December 25, as the state works to make booster shots available to vulnerable cohorts later this year.

“I simply cannot tell you how proud I am of every single Victorian who has persevered, showing great courage and character but also shown amazing kindness towards each other.”

Mr Andrews said he expected to reach the 80 per cent threshold slightly before next weekend – a few days sooner than anticipated – but warned that reopening would inevitably mean more cases of COVID-19 in the community.

Victoria recorded 2189 new coronavirus cases on Friday, the third-highest number of the third wave. There were also 16 deaths, the highest number since September last year.

As restrictions eased on Friday, the head of Victoria’s Chamber of Commerce and Industry, Paul Guerra, welcomed the end of lockdown and said the key to economic recovery would be when regional Victoria and metropolitan Melbourne were reunited.

Australian Industry Group chief executive Innes Willox said “today is a good day”, but there was still a way to go.

“It is a good step, but it has been marked with a lot of inconsistencies and strange, arbitrary decisions on the way through. A lot of businesses still are not able to open.“

Many Melburnians headed out to celebrate the easing of restrictions on Friday. 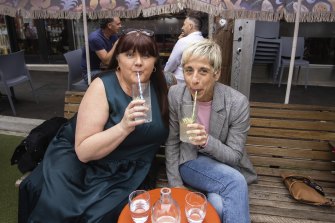 Jody Brodribb and Joanne Taylor celebrate the easing of restrictions in Yarraville on Friday afternoon.Credit:Paul Jeffers

Friends Jody Brodribb and Joanne Taylor met for a couple of gin and tonics in Yarraville on Friday.

“The reopening of the world it feels like,” Ms Brodribb said.

“I’ve put on makeup for the first time in three months.”

Yarraville barber Henry Minassain was so busy trimming the overgrown locks of his loyal customers he had to skip lunch. 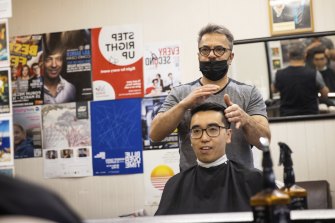 He didn’t get a chance to have a coffee either, as a steady stream of customers flowed into the Ballarat Street shop from 6am.

Mr Minassain said he had done more than 30 haircuts since rolling up the shutters, and estimated he would be going home closer to 8pm.

He plans to work seven days a week for the next three weeks just to deal with the demand.

“It’s good to be wanted again,” he said.

Getting a haircut before hitting Melbourne for a meal with friends, Yarraville project manager Tim Su joked he looked like an unkempt Beatle.

Mr Su said it was the first time he had cut his hair since his wedding day in May after missing the cut-off date before the latest lockdown.

He planned to meet friends for a Korean feast at Hansang in West Melbourne, even if it meant lining up for hours.

“We’ll just wait in line until we can, we have no back-up plan,” he said.

The city’s cafes, restaurants and bars opened their doors to patrons on Friday but a last-minute clarification to the rules requiring all hospitality staff to be fully vaccinated left some businesses unable to open.

Oakleigh cafe 5Five Bakehouse Kitchen had been looking forward to welcoming sit-down guests, but owner Dimitra Kourelis said the vaccine mandate, which initially only required workers to have had their first dose booked in this month, had left her short-staffed.

“I have four staff double dosed and the rest single dosed,” Ms Kourelis said. “You can’t open a business with only four staff. We have been one of the lucky ones who survived two years of lockdown only to be hit by this whammy.”

Some restaurant owners and publicans are bracing for abuse from unvaccinated patrons, not allowed to get a pint or a meal after months of lockdown measures.

Post Office Hotel owner Danial Caneva said the industry was worried about the safety of staff but said those keen to grab a beer at his Coburg pub on Friday morning had checked in without incident.

With more than 90 per cent of Victorians expected to be fully vaccinated by the middle of next month, the state government will follow NSW and scrap rules requiring international travellers to quarantine from November 1, if they have been fully vaccinated and agree to get tested.

Under the plan, a handful of quarantine hotels will remain active and a cap of 250 beds be put in place for unvaccinated travellers or those who have received a vaccine that is not approved by the federal government.

Mr Andrews said the state government was committed to building a scaled-back quarantine facility at Mickleham, which could also be used to house victims of natural disasters if the number of people needing to quarantine dropped.

While arrivals would initially be limited to Australians returning from overseas, Mr Andrews said he was optimistic international tourists would return by Christmas.

”I want tourists back quickly as we can, as safely as we can and the no-quarantine [rules] for the double-dosed with some testing, is a really important step.“

Tasmania announced it would reopen its borders to all of Australia on December 15, allowing entry to anyone who is fully vaccinated and tests negative within 72 hours of travel.

Free travel between Canberra and Victoria will restart on November 1.

With Jewel Topsfield and David Estcourt