For drama, character and sheer weirdness, it’s hard to beat people-watching in a public square. There is choreography: the unplanned weaving of unrelated bodies through the space. There is conflict and fear, and the navigation of rules laid down by society, government and architecture.

And there is a soundtrack: human, machine and natural; voices, vehicles and the wind. 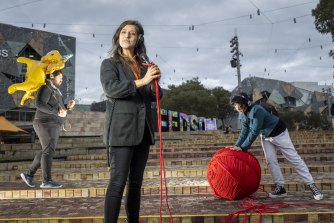 When jazz singer, artist and former Triple R presenter Sophia Brous was invited by a New York arts festival to create a work for a public space, she decided to make public space into a work, and The Invisible Opera was born. It’s been performed in Brooklyn, Austria and Singapore, and now it’s coming to Federation Square in Melbourne for the Rising arts festival.

“Every time we do it in a different city, it’s like making an entirely new piece, a new show,” says Brous. “It’s a live-performance event and also a mass-surveillance exercise.”

She co-created the piece with artist Lara Thoms, director Samara Hersch and American choreographer Faye Driscoll. Brous spent hours, even days, sitting in Federation Square, Union Square in New York, and the centre of Graz, Austria’s second biggest city – jotting into her notebook the actions and scenes, the interactions and microagressions, building a “taxonomy” of the squares’ life, she says.

“There’s a very natural choreography and architecture and aesthetic beauty to these things, but we view them through the eyes of the everyday and see them as quite mundane,” she says. “If you slow down and watch long enough, a city square will always ‘give’.

“Every city has characters – New York is replete with them. You would see people walking across space and their movements were implicitly balletic or choreographic… these unusual, interesting gestures. Or [I was] sitting next to a man in Graz who smoked a cigarette almost like a Looney Tunes cartoon character, he would smoke five puffs, exhale a large breath, and repeat.

“Or overhearing a physicist being approached by a Christian evangelist telling him Jesus will save him, and he stopped and explained to her the Big Bang. Every day, public squares are these natural menageries of all things. We see flamboyance and great beauty and we also see inequality and cruelty … and the show is trying to explore all those things.”

The audience will have headphones that deliver the show’s electro-acoustic soundtrack, augmented by live feeds from microphones dotted around the area: from the banks of the Yarra River up to the top of the Eureka Tower, plus voices and singing.

And they (and anyone else around) will observe “spectacles” within the show. Are they members of the public, or corporate brands, or performers? Or, as Brous calls them, “conspirators”?

“Maybe they’re our cast or maybe not – the audience is constantly asking the question of what is and isn’t staged.”

What she can guarantee is that it will be uniquely Australian. American public squares, she says, were an expression of the country’s “individualistic superpower”. In Australia, she feels, “people are well-mannered and I think people are wary”.

“The wariness feels palpable. If somebody yells in a space, it means something, it alerts something deeply animal in us that wants to immediately identify the risk.”

Over the week in Federation Square, she’s also seen school groups learning about the history of the waterfall (where the Queen St Bridge is today), Scientologists trying to talk about “thetan meters”, and a lot more.

“All you have to do is sit for a moment, and it will reveal itself to you.”

The Invisible Opera has five performances at Federation Square, two on June 10 and three on June 11. Details rising.melbourne