Satanic Temple wants to open after school clubs in schools

Elementary schoolchildren in Moline, Illinois, have been invited this week to an “after-school Satan club” with five different meeting dates planned for early this year — starting Thursday, Jan. 13, 2022 — according to a flyer placed in the school’s lobby and shared on social media.

Some parents are angry about their children’s exposure to information about the club, apparently prompting the superintendent of schools to weigh in. The Satanic Temple says on its website that it operates the clubs “at select public schools where Good News Clubs also operate.”

Given the “many mounting concerns and questions” about the “Satan club” flyer that was made available to students at Jane Addams Elementary School in Moline, Illinois, Dr. Rachel Savage of Moline-Coal Valley Schools wrote a letter to parents, which was also shared online.

“I wanted to take a moment and share some additional information regarding the after-school club you may have heard about,” she wrote. “I know there are many mounting concerns and questions. I hear you and I understand.”

The superintendent noted that the “facility rental for this after-school activity was not generated by the district and is not affiliated with Jane Addams or the district. It is nothing that involves or impacts the school day.”

She made the following point as well: “A parent from within our district reached out to the national after-school satan club, informing them that Jane Addams Elementary School, in Moline, offers a child evangelism fellowship club and asked that they bring their program to that school as well, to offer parents a choice of different viewpoints.”

Fox News Digital, which reached out to the district, received a reply on Thursday afternoon, confirming that the flyer that has been circulating is indeed legitimate but stressing that it was “not generated by the district, not distributed to all students, and not affiliated with any teacher in the district,” according to Candace Sountris, communications director for the school district. 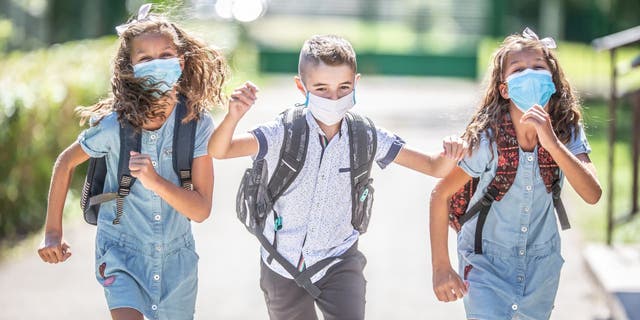 Elementary schoolchildren like those shown here have had flyers made available to them in the lobby of their school district in Moline, Illinois, that discuss activities and information about an after-school ‘Satan club’ that meets beginning on Jan. 13, 2022.
(iStock, File)

Patti Garibay, founder and executive director of American Heritage Girls, a Christian alternative to the Girl Scouts, told Fox News Digital in an email about the club, “At a time when youth are experiencing a mental health pandemic, it is outrageous that a school district would allow a club based on the master of confusion.”

The superintendent of Moline-Coal Valley Schools said in her online note to parents that the flyers were “not distributed” to all students. She said the “flyers and promotional materials” were sent to the school by the organization “to be placed in the lobby.” There, flyers were made available for children to peruse and pick up if they chose to do so.

She made these other points in her memo:

One Moline parent, who shared a photo of the club’s flyer online, received incredulous responses to her post, including this: “Wait what????? How is this even a thing? Who approved this?”

The Satanic Temple website notes that the mission of the group — which is nationwide — is to “encourage benevolence and empathy, reject tyrannical authority, advocate practical common sense, oppose injustice, and undertake noble pursuits.”

The group also says its fundamental tenets are as follows:

In an FAQ section, the Satanic Temple group says on its website in response to the question “Do you worship Satan?”: “No, nor do we believe in the existence of Satan or the supernatural.”

It goes on: “The Satanic Temple believes that religion can, and should, be divorced from superstition. As such, we do not promote a belief in a personal Satan. To embrace the name Satan is to embrace rational inquiry removed from supernaturalism and archaic tradition-based superstitions.”

The Moline parent amplified her post on Tuesday to say this: “I will add that the flyer [about the after-school Satan club] was only allowed due to the rules and regulations that the school has to allow it. My kids attend a pretty good school. I may also add that no teacher physically passed out the flyers.”

GET THE FOX NEWS APP HERE

Another individual shared this on Facebook, “Our poor world is headed to hell on the back of a rocket!”

Someone else wrote, “[This] will continue [until] parents take back their schools and kids.”