Australia’s media authority has cleared the public broadcaster ABC over an episode of its current affairs discussion program Q+A in May last year that drew criticism from some Jewish groups for breaching principles of impartiality and balance.

Ten complaints about the episode, including one from the Australia Israel and Jewish Affairs Council (AIJAC), were rejected by the Australian Media and Communications Authority (ACMA) on Tuesday. 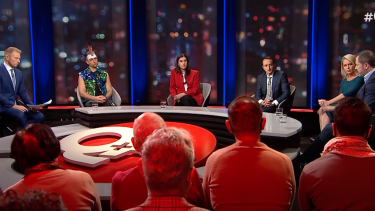 The complaints criticised the composition of the panel, which contained several people critical of Israel but only one, Liberal MP and former Australian ambassador to Israel Dave Sharma, who consistently defended the country.

The ABC ran the episode following a ceasefire between Israel and the Palestinian militant group Hamas after 11 days of violence that began on May 10, 2021. In that period, Hamas fired hundreds of rockets into Israel following tensions in occupied East Jerusalem, before Israeli forces bombarded the Gaza Strip with air strikes.

In its report, ACMA noted that the ABC had invited Israeli ambassador Jonathan Peled to appear on the program but he was unable to attend. Another guest suggested by the embassy declined to appear as an “expert audience member”.

The authority added there could be no exact balance on the panel, which discussed contentious issues ranging from the COVID-19 vaccine rollout to the conflict in West Papua as well as the Israeli-Palestinian conflict, which had seen days of armed conflict just before the program aired.

It reviewed submissions from the complainants and the ABC, which stood by the broadcast and rejected complaints about it that were made directly to its Audience and Consumer Affairs division. The way the ABC deals with complaints is currently under a review commissioned by its board, which has received about 50 submissions and compiled a set of recommendations.

“The ACMA notes that perspectives reflecting both Israeli and Palestinian positions on the subject matter were presented during the segment, with panellists able to express their views in some detail and broaden the scope of discussion to include the wider historical and political context.

It highlighted host Hamish Macdonald’s role in seeking responses from Mr Sharma on contentious points and the MP’s “persuasive articulation on these matters” which meant, in ACMA’s judgement, that no perspective was favoured over another.

Another complaint about the ABC’s reportage of the Israeli-Palestinian conflict is still before the ACMA.

The office of the High Commission of Human Rights said that until May 27, 2021, more than 250 Palestinians, including 66 children, were killed and thousands were injured. Authorities put the death toll in Israel at 12 in the same period, with hundreds of people treated for injuries in rocket attacks.