Distraught mother reveals she was told to ‘kiss and cuddle’ her daughter, nine, goodbye as she battled leukemia and sepsis – before the little girl defied the odds and opened her eyes

The mother of a nine-year-old girl who was diagnosed with leukemia revealed how she was told to ‘kiss and cuddle her goodbye’ days before Christmas.

Sophie Laidler, from Durham, was left fighting for her life after she was diagnosed with the blood cancer in October 2016, with her parents Nicola and Paul given the heart-wrenching news that they should prepare for the worst.

Mother-of-three Nicola was at her daughter’s bedside on Christmas Day as Sophie, then seven, lay in an induced coma as she fought against pneumonia and sepsis while in intensive care. 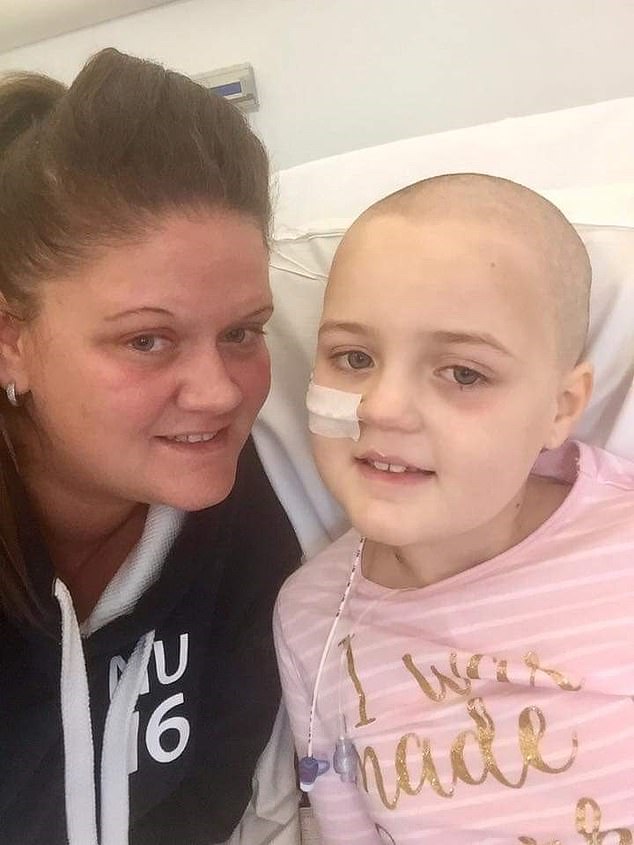 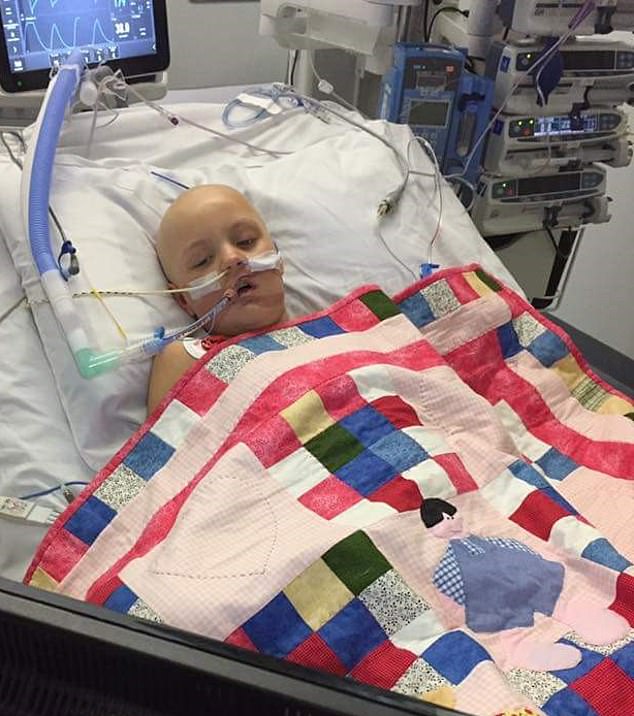 In hospital: Sophie Laidler, nine, was diagnosed with leukemia after suffering from aches and  pains in her joints. She was eventually placed in an induced coma 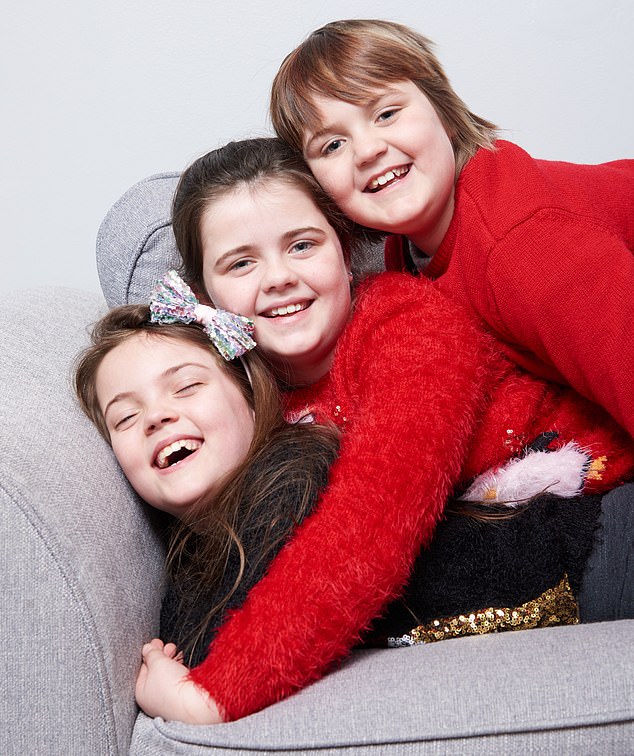 Recovery: Against all the odds – and doctors’ expectations – Sophie came out of the coma and opened her eyes. She is now looking forward to Christmas with her sisters, pictured together

But against all the odds – and doctors’ expectations – Sophie came out of the coma and opened her eyes on Boxing Day.

The family are now looking forward to the fun and excitement of the festive season. Sophie should also finish her chemotherapy treatment in January 2019.

It was in the summer of 2016 that Nicola first started to realise there was something wrong with her daughter.

‘She loved her food and one Sunday afternoon she couldn’t finish her roast, it was completely unusual for her,’ Nicola recalled.

‘Then she started to get aches and pains in her joints. We thought it was just growing pains until she was tired all the time too.’

It wasn’t until October 2016 that Nicola consulted a doctor, as Sophie had started to develop a rash all over her tummy too. Worried that it was meningitis she took her to A&E where they did blood tests on her. 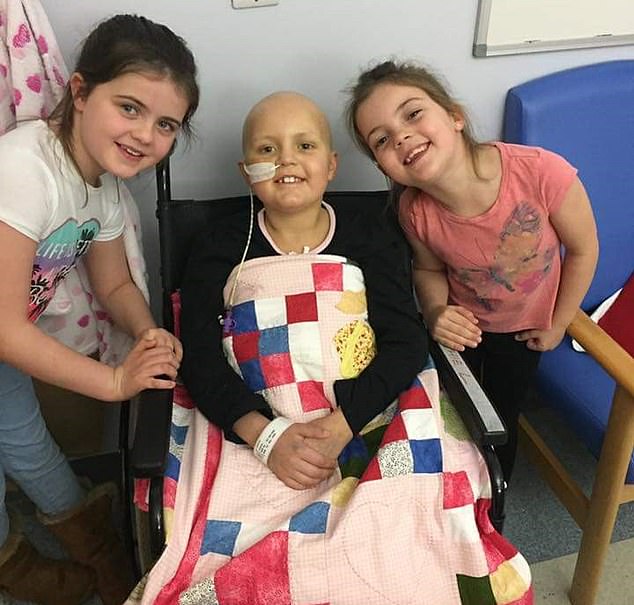 Support: Sophie lost her hair through treatment for leukemia, but spent precious time with her two sisters Chloe, 10, left, and Heidi, eight, right, in hospital 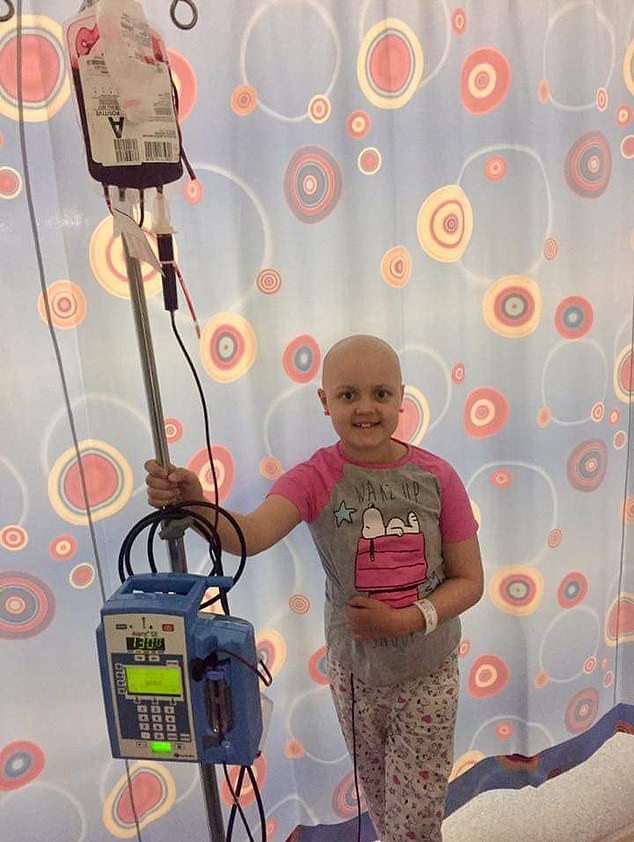 Vulnerable: Treatment was initially successful but Sophie, pictured in hospital, began picking up colds and lung infections. She was later diagnosed with sepsis

‘We just weren’t expecting the news that she had cancer, it was devastating, I burst into tears,’  the mother added.

‘The next day we had to explain the news to Sophie. Some relatives had just died of cancer so we had to reassure her that she wouldn’t die – it was heartbreaking.

‘”You’ve just got poorly blood,” I told her, “the doctors will make you better.”‘

The day after Sophie was diagnosed she started her chemotherapy. But it meant more anguish for the family as Sophie’s hair started to fall out.

The treatment went well until the end of November, when she started to pick up colds and a lung infection. 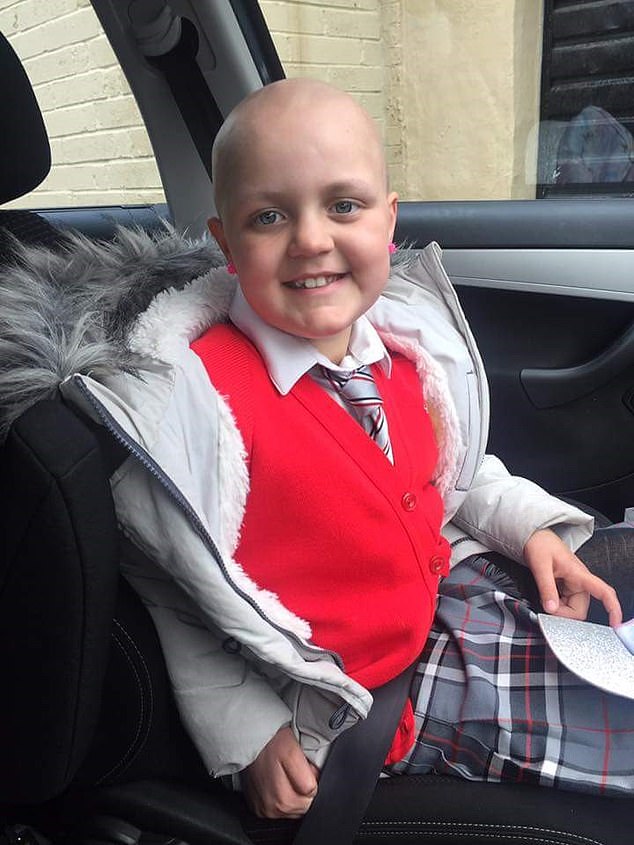 Back to School: After Sophie was well enough she went back to school, even though she was till on chemotherapy tablets. The schoolgirl is scheduled to finish treatment in January

‘Her temperature shot up and before we knew it they were transferring her to intensive care,’ Nicola continued. ‘Then she just got worse and worse.’

Sophie had to fight against pneumonia and sepsis, then finally doctors put her into an induced coma.

Doctors weren’t hopeful of her diagnosis.

‘They told us that if she didn’t wake up on her own she may not wake up at all, but it would give her body the best chance to fight.’

It was during these darkest hours in the hospital parents’ room that Nicola met Sabrina, a Rainbow Trust Family Support Worker. The charity supports families with a seriously ill child.

‘I had been in with Sophie for a long time and she wasn’t getting any better,’ Nicola said. 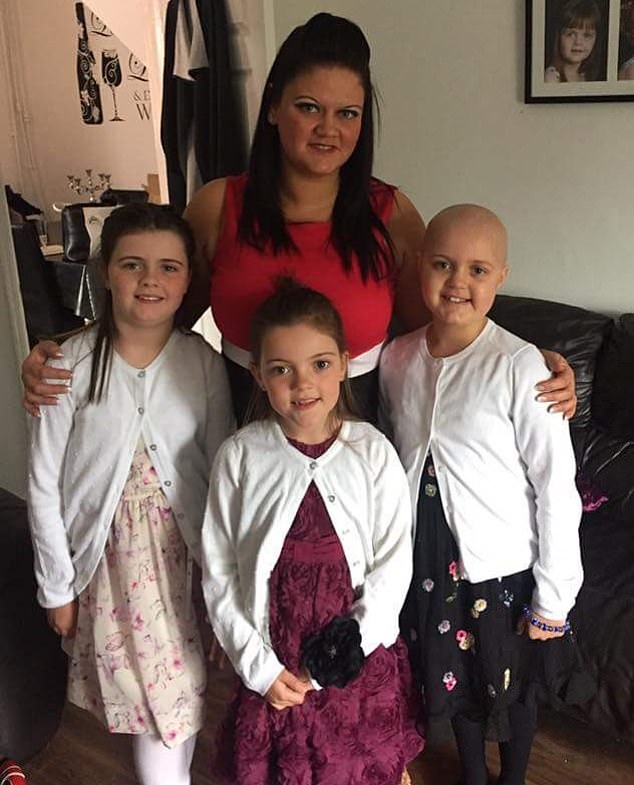 ‘Sabrina started talking to me and sat me down while I cried. It was nice to have someone there to emotionally support me. Just before Christmas she came in with Christmas presents for the children.

‘By this point Sophie was on a cliff edge and could go either way. She was struggling to breathe because of the lung infection so doctors put her on a ventilator but to do that they had to put her asleep.’

Her condition became so bad that just before Christmas they told the family to kiss and cuddle her goodbye. ‘The girls were mortified, we never thought we’d see her again.’

But, just after Christmas, as her family were about to give up all hope of Sophie’s condition getting better Sophie miraculously opened her eyes, much to the surprise of her family and doctors.

The family were elated, including her big sister Chloe, 10, and her little sister Heidi, eight.  ‘It was literally the best Christmas present we all could have got,’ Nicola said. 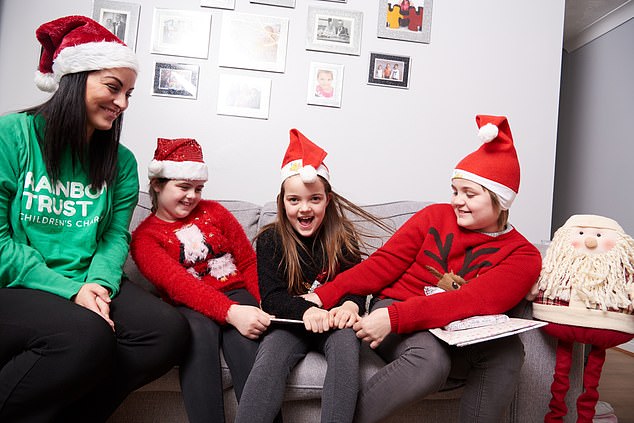 Festive season: Sophie, right, and her sisters with Rainbow Trust support worker Sabrina, who helped mother Nicola as she struggled to cope with her daughter’s diagnosis

As Sophie’s condition started to improve her chemo restarted and she even went back to school. She is now on chemo tablets and is living a full life.

The family are looking forward to Christmas and what the New Year will bring.

‘We’ re looking forward to the Cinderella pantomime at Theatre Royal Newcastle and we’ve also booked to go out for a lovely Christmas meal on Christmas day,’ Nicola said.

‘Sophie’s now doing really well. I don’t think you can ever really rest, you always have worries in the back of your mind, especially knowing all the families whose children have relapsed, but things are looking good at the moment.

‘Sophie’s due to finish chemo on 31 January, that’s when we’re looking forward to her ringing the bell. That’s when we can say she’s kicked cancer and throw her an end of treatment party.’