Pelosi also administered the oath of office to members of the most diverse new Congress ever. More than 100 female House members were sworn in, including the first two Native American women and the first two Muslim women.

Congress overturned a two century-long ban on hats so that Minnesota’s Ilhan Omar could wear her hijab on the House floor. Twenty-five new members are under the age of 40, their youth reflected by the swarm of congressional offspring who filled the chamber. 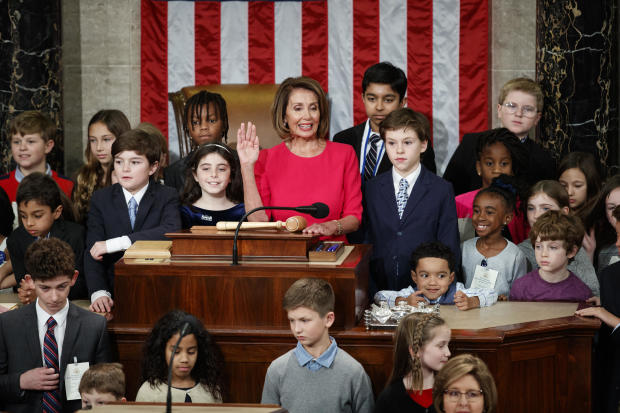 At 78, Pelosi is the first person to reclaim to the speakership in more than 60 years, winning support from all but a dozen Democrats after two months of horse trading and policy promises.

On Thursday Democratic committee chairs — newly vested with subpoena power — began to lay out their plans to investigate President Trump and his administration. They filed legislation to go after the president’s tax returns and vowed to reopen a Russia probe House Republicans closed last year. As special counsel Robert Mueller continues his investigation, Pelosi disputed the Justice Department’s claim that a sitting U.S. president cannot be indicted.

House Democrats are also planning to vote to fund the parts of the government that have been shut down for two weeks. But the Democratic bill doesn’t contain the border wall money the president is looking for, so the president said it’s a non-starter. He’s invited House and Senate leaders to the White House on Friday to continue negotiations.

01/04/2019 lifestyle Comments Off on 116th Congress takes office as the most diverse in U.S. history
Recent Posts