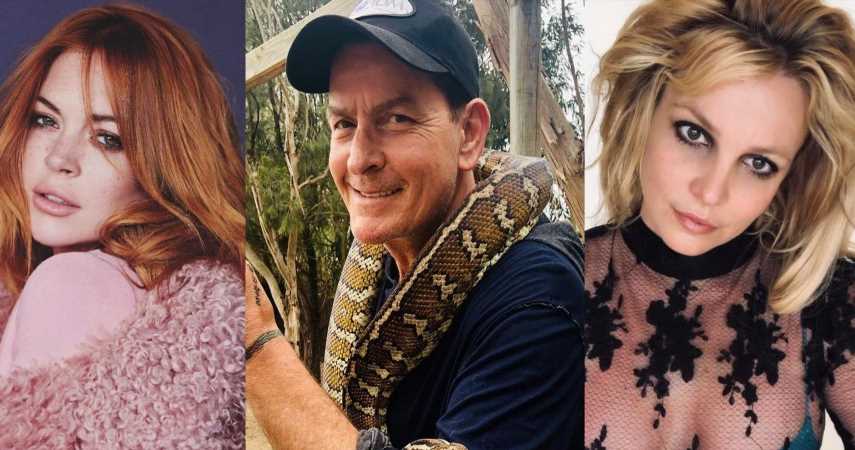 Celebrities seem to have it made. They’re among the very small percentile of the population that have access to the finest things that life has to offer. Living a life of luxury and being world famous for their talents seems like a true gift, and most would assume that after rising to this level of success, top earning stars would realize the privilege they are surrounded by, and do everything in their power to safeguard all that they’ve worked so hard to achieve. Sadly, that’s just not the case. There are so many celebrities that fall from grace and end up engaging in behavior that strays so far from the thresholds of being acceptable that their fans turn their backs on them. Ranker reports that just as quickly as their star rose to the top of fame, it all can come crashing down around them.

A once promising actress with a widely successful career, Lindsay Lohan is now considered to be the ultimate celebrity train wreck. Her mug shots are well circulated, and her numerous stints in rehab, and various arrests are too much for most fans to handle.

It’s hard to imagine that after soaring to the top of fame with roles in The Parent Trap, Mean Girls, and Herbi: Fully Loaded, Lohan would throw it all away. Drug possession and drunk driving took over and she was eventually admitted to a high security rehab center.

Nobody in Hollywood wants her name attached to their projects anymore.

Once known as a talented musician in the grunge group Hole, and recognized as the widow of the frontman of Nirvana, Kurt Cobain, Courtney Love has been identified with some of the trashiest, most bizarre behaviors in Hollywood.

She struggled with addiction issues and never quite got a grip on her reputation after it was spoiled. She continues to act erratically, and is now known to send a series of troubling tweets and engaging with aggressive online behavior. The chances of her making money with music are well behind her.

Charlie Sheen dominated the small screen with his hit sitcom Two And A Half Men. He truly had it made, loosely playing the role of himself on the show – a rich playboy that got himself into some sticky situations with the many women in his life.

When he went head to head against the creator of the series, Chuck Lorre, Sheen’s rumored addiction issues rose to the surface in a way that the world won’t soon forget. His 2011 on-camera meltdown included declaring himself a “warlock” and starting the viral hashtag #WINNING, which in essence, he was anything but.

He subsequently disappeared from Hollywood and hasn’t resurfaced in any new roles.

Amanda Bynes was the beautiful young actress that was the pride and joy of Nickelodeon.

After starring in All That and her very own show called The Amanda Show, among a series of other huge Hollywood accolades, Amanda Bynes dipped out of roles to pursue an active interest in illegal substances and crass behavior. Although her mental health issues complicated her situation by making many question whether her behavior could be largely out of her own control, she quickly became too controversial for the network and nobody wanted her to represent their brand.

She ended up in rehab with a severely diminished reputation that the industry simply wants nothing to do with.

Macaulay Culkin will forever be remembered as the adorable child that was left alone to fend for himself over the Christmas season in the Home Alone series. That’s partially because it was his most epic role, and partially due to the fact that he really couldn’t pick up any decent work after that.

After rising to fame as Kevin McCallister, the youngster was in high demand and his child star status was solidified. Doors were open for him at every turn, but he steered towards illegal substance abuse and was arrested on a series of charges.

No longer cute or desirable, his career shriveled up and his income flatlined.

Nobody will ever shake that moment that Britney Spears’ mental health unraveled in front of the world. After shaving her head she started a very public and incredibly troubling aggressive rant with an umbrella and it was obvious that she completely lost control.

She then went on to lose custody of her children and was admitted into psychiatric care.

Since that fateful day she went from being a worldwide singing sensation with the world at her feet and a huge career in front of her, to now being fully controlled by a conservatorship without full rights to her own lifestyle.

She has fully self destructed and fans are now obsessed with her bizarre and cryptic posts on social media.

Tara Reid was an international party girl who unfortunately didn’t know when to slow down and take her career seriously. She was caught up in a dangerous lifestyle full of partying and substance abuse and took her wild side a bit too far. She became dangerously thin and began neglecting the few acting roles she had left.

Reid underwent a series of plastic surgeries that were botched and she showed no ability to regain control of her life enough to continue her career.

Mel Gibson has played some truly iconic roles and has been recognized as one of Hollywood’s leading men. With huge hits under his belt such as Braveheart, the entire Lethal Weapon series and the Mad Max series, among countless others, it’s shocking to see how he led himself down a path of self-destruction.

His career was obliterated when he began demonstrating drunken behavior and going on explosive anti-Semitic rants. He then went on to leave a horrific message for Oksana Grigorieva, his former girlfriend with some graphic and truly awful statements that live forever on the recording.

Shannen Doherty was the fresh faced star in Beverly Hills 90210 and could have easily commanded any amount of money she desired for future roles. Her acting was on point and fans loved tuning in, but that wasn’t the case on-set.

There were numerous complaints about her being a holy terror while filming, especially noting terrible treatment of co-star Jennie Garth. She was also very indifferent to her responsibilities and was notoriously late for shooting, expecting everyone to work around her schedule. Everyone wanted to watch her on TV, but nobody behind the scenes was willing to work with her.

Shia LaBeouf has played huge roles including acting in the Transformers series and Wall Street: Money Never Sleeps as well as Disturbia. He is an incredibly talented and convincing actor with the capability of taking on some very challenging roles that span across a diverse range of genres.

Sadly, his aggressive behavior off set has diminished anyone’s desire to include him in future roles. His list of public fights is a long one, and one of them even involved threatening someone with a knife. There are a series of disorderly conduct incidents caught on camera, and it seems he has totally lost his ability to act appropriately, even when he knows he’s under the prying eyes of the general public and their cameras are documenting his behavior.

READ NEXT: Lindsay Lohan Is All In On The NFT Revolution