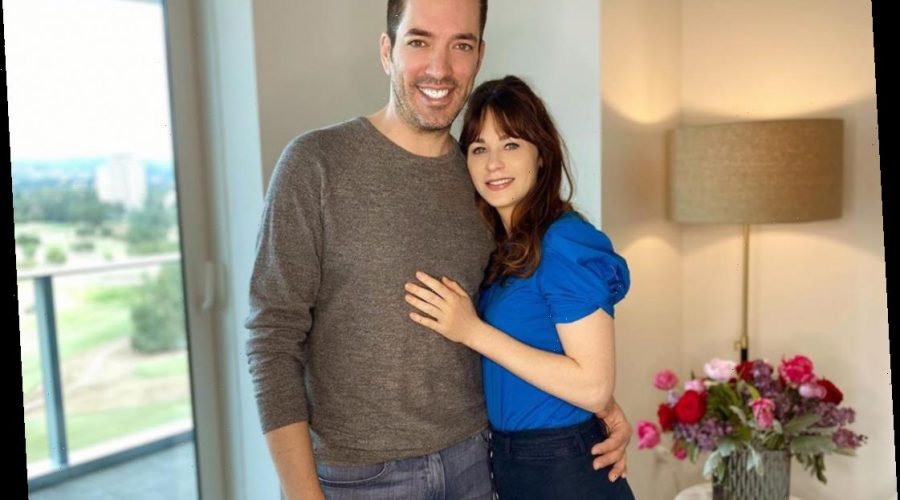 Zooey Deschanel and Jonathan Scott are starting the year off on an affectionate note!

The couple, who celebrated their one-year anniversary in August, both shared sweet tributes to one another on Saturday as they celebrated the start of a new year.

“My 2020 MVP was this guy, who always made me feel happy in spite of a weird and uncertain year,” the actress, 40, wrote on social media alongside two images of the pair embracing, which were taken by her father.

“Hoping 2021 is full of silver linings for everyone,” the mom of two added.

Meanwhile, the Property Brothers star, 42, shared in his own post that thanks to Deschanel, he’s already gotten a “good jumpstart” on his New Year’s resolutions.

“I’m dedicating this year to love, happiness and the pursuit of helping others,” the Celebrity I.O.U. star wrote. “I feel like I’ve got a good jumpstart on the love part 🥰 .”

Back in November, Scott playfully addressed rumors that he and Deschanel were already engaged.

“I’m pretty confident that I will ask my girlfriend to marry me before I tell a reporter,” he joked during a SiriusXM interview, also sharing that many of the rumors include his twin brother Drew.

“We were actually laughing because almost every story that comes out is ‘Drew Gives Permission for Jonathan to Wed Zooey’ or ‘Drew Gives His Nod to the Relationship,’ ” Scott said. “We’re like, so is Drew my ‘Brother-Daddy?’ Does he have to approve everything that happens in my life?”

Deschanel and Scott met in the summer of 2019 while filming an episode of Carpool Karaoke together, and Scott previously told PEOPLE that "there was chemistry right away" during their shoot.

“We literally make each other laugh nonstop,” the HGTV host said last January. “I have never been in a relationship where my partner is as romantic as, if not more romantic than, I am. I’m usually the one who carries the romantic load.”

“She’s smarter than me, she’s funnier than me, and she’s cuter than me! She’s a very considerate person, and that’s what I’m looking for,” he added. “I had said before that the most important thing for me was a sense of humor. But you have to be kind, and she definitely is.”

The couple’s romance was certainly on display when they celebrated their first anniversary over the summer.

"One year ago today I met this kind, caring, hilarious, generous, creative, nerdy, handsome and all around incredible human," Deschanel wrote. "I am so grateful for every smile, kiss, hug, snuggle, laugh, scrabble game, escape room, breakfast, lunch and dinner we share together. Even during the weirdest year for humanity I want a million billion more with you. 🥰."

"Who would’ve known that exactly one year ago my life would change forever,” Scott added in his own post. “When I count my blessings, I count you twice."

01/02/2021 Home and Garden Comments Off on Zooey Deschanel Calls Boyfriend Jonathan Scott Her '2020 MVP' in Loving Tribute
Recent Posts
We and our partners use cookies on this site to improve our service, perform analytics, personalize advertising, measure advertising performance, and remember website preferences.Ok