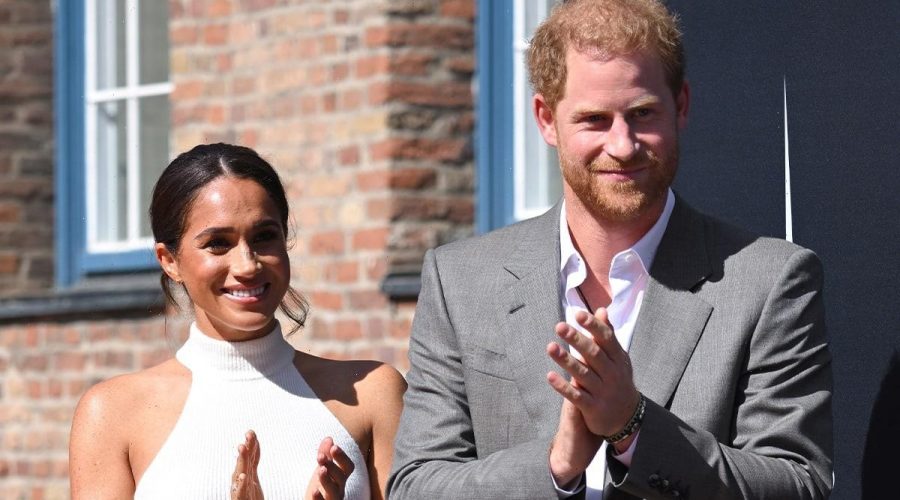 Prince Harry and Meghan Markle have revealed their jaw-dropping front door at their £11million family mansion in Montecito where they reside with their two children Archie Harrison and Lilibet Diana.

The Duke and Duchess of Sussex showcased their amazing entranceway in their bombshell Netflix docuseries, Harry & Meghan, when Meghan waved off Prince Harry as he departed for his grandfather Prince Philip‘s funeral in the UK.

WATCH: Meghan Markle waves Prince Harry off at grand entrance of US mansion

At the time, Meghan was heavily pregnant with their daughter Lilibet so made the decision not to fly back for the poignant occasion and she was seen cuddling their son Archie as she stood at the door to say goodbye.

The couple’s stone property is covered in sprawling ivy, giving it a postcard-perfect exterior and there are double wooden doors which lead into their home.

The couple have an amazing garden at their property

Flanked by oversized pots with trees in and vintage lamps, Harry and Meghan’s front door is pretty spectacular, don’t you think?

The docuseries gave fans a chance to see even more of their idyllic residence including their endless garden with chicken coop and plenty of space for their children to roam free.

LATEST: Prince Harry prepares for another tell-all interview ahead of ‘explosive’ autobiography

Another space which was showcased in a candid photo was Lilibet’s nursery. Meghan took a postpartum selfie in the little girl’s room which is complete with beamed ceilings, a Moses basket cot, wicker storage baskets and a real orchid on a traditional dresser.

Harry and Meghan’s daughter Lilibet has a beautiful room

The walls include a beautiful leaf motif, and a sweet squirrel can also be seen above the door. This animal addition could be in homage to the wildlife in their garden as Prince Harry has previously revealed that his pet dogs love chasing squirrels in the yard.

Elsewhere the family have a wine cellar, a games room and a vast outdoor swimming pool at their private home. Celebrity neighbours in the A-list enclave include Oprah Winfrey and Ellen DeGeneres who both often spend time with the royal couple.