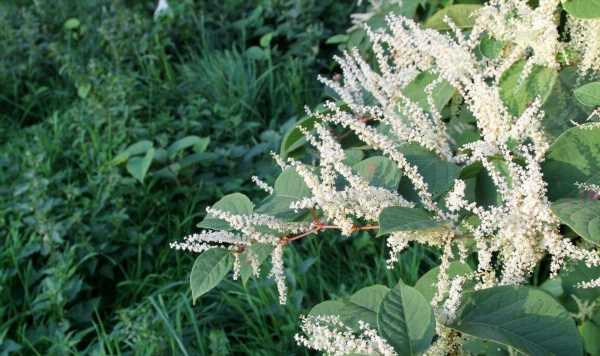 Japanese knotweed is known for its heart-shaped green leaves and reddish-purple shoots that emerge in the spring. Once it begins sprouting, it grows quickly producing bamboo-like canes with purple flecks in the summer months which can grow to be around 7ft tall. The plant also produces white flower tassels in late summer and early autumn.

In the winter months, Japanese knotweed stems die back to ground level but the canes remain for several months.

The plant is problematic because it’s incredibly invasive and the plant can sprout from even the smallest section of rhizome left in the soil. It’s also an offence to cause the weed to grow in the wild.

There are usually only two methods to banish Japanese knotweed – either using a specialised weedkiller or by digging it out. Both methods usually require professional expertise.

But now, a thermoelectric device which zaps the plant at its roots could be the key to ousting the difficult plant without using harsh weedkillers.

The device, named the RootWave machine, was created by a British start-up and aims to boil the roots of Japanese knotweed with an electric tool that delivers 5kv of power directly to the plant.

The device has already been trialled by Transport for London (TfL), English Heritage and the Arsenal football club.

TfL claimed the devices were “highly effective” and have bought two of the machines to use on the pesky weeds.

The device will be offered to homeowners by the Japanese Knotweed Agency which said the device can be more effective than chemicals with most of the plant under control on the first visit.

However, treatment using the RootWave doesn’t come cheap with a five to 10-year plan costing around £3,000. But this does include both operatives and the machinery itself.

Home sellers are required to state whether their property has Japanese knotweed on it in a TA6 form – a form designed to give potential buyers detailed information about a property.

The form asks the seller to confirm whether their property is affected by Japanese knotweed and, if so, to provide a management plan for getting rid of the plant.

Homeowners will usually have to excavate the plant and dispose of it at a licensed landfill site.

Looking for a new home, or just fancy a look? Add your postcode below or visit InYourArea

Guy Barter, the chief horticulturist at the Royal Horticultural Society, told The Telegraph Japanese knotweed is “exceptionally difficult to kill” because of how deeply and extensively its roots can penetrate.

The RootWave machine could offer a chemical-free alternative for banishing the plant. However, Mr Barter said the efficacy of the device still remains unproven.

He added: “It would be wonderful if it was a silver bullet, but I’ve yet to see any evidence.”

The plant expert also advised homeowners against treating Japanese knotweed themselves with weedkillers as it’s unlikely to completely eradicate the plant, seeing it return in years to come.

The Royal Horticultural Society also advises against using chemicals like herbicides in gardens whenever possible.

Their website reads: “The RHS believes that avoiding pests, diseases and weeds by good practice in cultivation methods, cultivar selection, garden hygiene and encouraging or introducing natural enemies, should be the first line of control.

“If chemical controls are used, they should be used only in a minimal and highly targeted manner.

“For example, where pests, diseases or weeds pose a serious threat to the wider environment, to important heritage specimens, to habitat, or to native wildlife.”