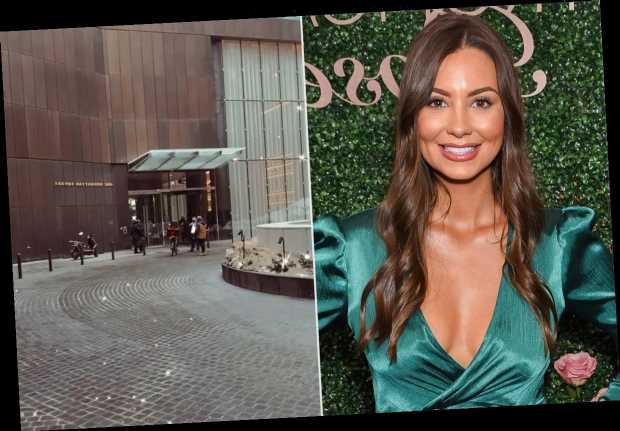 Kelley Flanagan is looking for her future home in the Big Apple.

On Monday, the Bachelor star — who had been dating Season 24 Bachelor Peter Weber until this past December — revealed on her Instagram Stories that she is currently apartment hunting in New York City.

The lawyer-turned-reality star, 28, shared that one of the apartments she is considering is the same building where Tyler Cameron and current Bachelor Matt James live together.

Flanagan posted several videos from her tour of One Manhattan Square, a luxury building on Manhattan's Lower East Side.

In the clips, she showed off the "beautiful" lobby of the building as well as the bedroom, bathroom and kitchen of a model apartment. Flanagan also gave followers a glimpse of the building's breathtaking skyline view, visible through a variety of floor-to-ceiling windows throughout the apartment. If the apartment looks familiar, it's because Cameron, 28, and James, 29, moved into a two-bedroom in the same high-rise building in October 2019. Cameron opened the home up to PEOPLE in July 2020, showing off the ways the pair had decorated and calling it his "first big boy apartment."

Last month, Flanagan revealed that she was still planning to move to New York after her split from Peter Weber.

Flanagan and Weber, who dated for nearly a year, originally planned to relocate to the city and move in together.

"I'll be in the Florida Keys until March then still making the move to New York!" she shared on Instagram in January. "I'm excited to share my next chapter with you guys and I'll try to be as open as I can knowing that I will hit struggles along the way."

"In the meantime, I am trying to figure out my future living situation in New York (searching for a roommate and apartment), spending time with my friends and family and focusing on my career!" she added.

As for Weber, the former Bachelor, 29, moved into a luxury building in Midtown Manhattan in January.

He shared a photo of himself taking in the view from his building shortly after moving in.

"Grateful @summitnyc #LiveAboveItAll," the pilot captioned a photo as he peered over the balcony.

In a video shared on his Instagram Stories, Weber revealed that his Bachelorette castmate Dustin Kendrick was one of the first guests to visit his new pad.

In December, Weber announced that he would still be making the journey to move from Los Angeles to New York.

"I'm here to share that Kelley and I have decided to go our separate ways. While our relationship was filled with countless beautiful memories, our relationship simply didn't work out in the end," the former Bachelor wrote in an Instagram post.

Weber and Flanagan first confirmed their relationship in April 2020. She came in fifth on Weber's season of The Bachelor, but they reconnected after his splits from winner Hannah Ann Sluss and runner-up Madison Prewett.