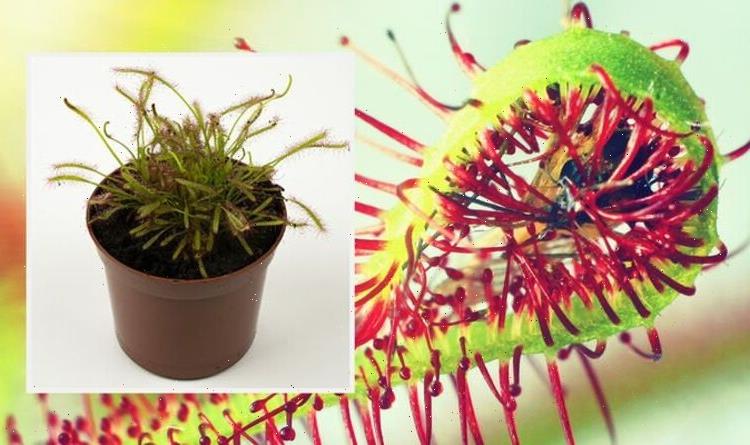 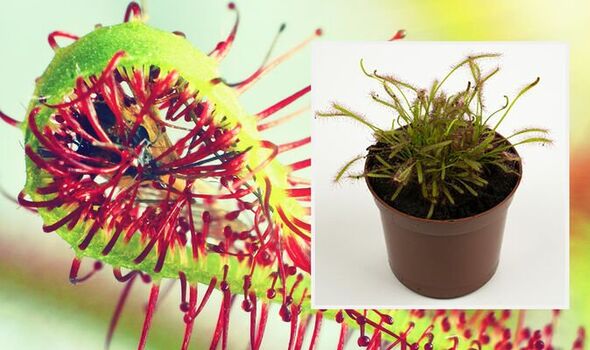 Do you have small black flies hovering around your houseplants? These are called fungus gnats, or sciarid flies. They are mostly harmless but can be very annoying. So what is the best way to get rid of them? One natural method to control flies is by growing a Sundew plant that will “trap” the flies.

The fungus gnats are small black flies that can be mistaken for fruit flies.

They live in the top five to eight centimetres of soil and feed on algae, fungi and plant roots.

Most healthy house plants can usually tolerate this minor root damage, but the larvae can harm seedlings or weak plants.

Getting rid of fungus gnats is actually quite easy, and while it is important to stop the lifecycle and them breeding in the houseplant compost, one quick solution is by growing a Sundew plant amongst your other plants.

There are many varieties of Sundew, but the Cape Sundew, Latin name Drosera capensis, is the easiest of all Sundews to grow.

It is also one of the most spectacular with its mobile leaves that roll up over the victim.

Originating from South Africa, Drosera capensis will do well on a sunny windowsill, conservatory or cold greenhouse.

The tiny hairs make it very good at catching smaller flies such as midges and mosquitoes, up to small houseflies.

After ridding your house of the flies, now it’s time to stop them from reproducing.

One of the biggest tips is by watering the plant less.

Fungus gnat larvae need damp compost to live, as this is where algae and fungi thrive, on which the larvae feed.

By allowing the compost to dry out between waterings, you’ll greatly reduce the fungus gnat population.

When you do water the plant, refrain from pouring water on the top of the soil.

Instead, sit the plant in the sink, or bath with a few inches of water in, or on a saucer of water, from which it can soak up the water through the bottom of the pot using its roots.

You can also try using gravel mulch to help get rid of the flies.

Gardeners World explained: “If you cover the surface of the compost with a one-centimetre thick mulch of gravel, grit or ornamental glass pebbles, this will stop house plant flies from being able to lay their eggs.

“As for the soil below, avoid using homemade garden compost indoors, as this can be a source of fungus gnats.

“Most commercially available composts have been sterilised, so they don’t contain fungus gnat larvae.”

Another method is using sticky traps.

While they are not the most pleasant to look at, yellow sticky traps work by trapping the adult fungus gnats and breaking their lifecycle.

Gardeners World suggested: “Simply hang up a trap near affected plants, or attach it to a bamboo cane inserted into the compost.

“Keep the trap near soil level, as gnats rarely fly far from the compost.

“Avoid hanging the traps outside as you’ll also trap butterflies and hoverflies.”

Finally, using a biological control can help reduce the number of flies, especially if you have a lot of houseplants.

The nematode Steinernema feltiae, predatory mites or rove beetle larvae, are all available from online supplies, and they should be applied according to the pack instructions.

It is worth noting, that while nematodes can be used in the home, the mites and beetle larvae are best used only in the contained environment of a greenhouse or sealed conservatory.

04/07/2022 Home and Garden Comments Off on How to get rid of small black flies: Sundew plant ‘very good at trapping fungus gnats
Recent Posts