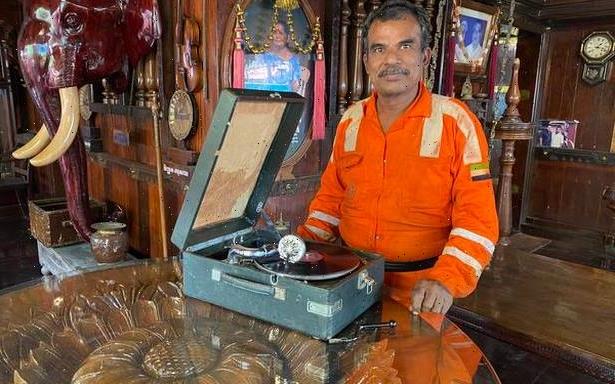 Famous for his tableau at the Cochin Carnival parade, V Venu talks about Gokulam, a house based on the principles of ancient Kerala architecture that took him four years to complete

Dressed in orange overalls, V. Venu is testing an old gramophone when I walk into his workshop on a clear sunny day. He places the needle gingerly on a moving 78 rotations-per-minute record and the machine breaks into a beautiful old Malayalam song.

“I am not an engineer or an architect,” says Venu as he leads me back to the entrance of Gokulam, a traditional three-storeyed Kerala house that took him four years to build.

V Venu, in front of the entrance to his house, Gokulam, built on the principles of Kerala architecture | Photo Credit: Special arrangement

Known for his tableau designs at the Cochin Carnival Parade, held annually on January 1 at Fort Kochi, Venu has won the Mayor’s Trophy 14 times in the last 18 years. But Venu says the creation “is a joint affair. Though I conceptualize it and look at the finer details, it is produced by my friends and colleagues working together for the Cochin Carnival parade.”

This year, however, the carnival has been cancelled due to the spread of the Omicron variant of COVID-19.

Also Read | Why Kerala speaks its own architectural design language

But there’s more to Venu than the detailed floats with their unique stories, settings, narratives drama and costumes. His creative space is his small cycle workshop in South Cherlai, where he not only repairs ordinary cycles and bikes, but has also created unique cycles like the one that can be pedalled by six people, foldable bikes, rickshaws — some of which have made it to films and won him recognition from the President of India in a competition run by the National Innovation Foundation in 2007.

Built on six cents of land and completed in 2014, he has now opened Gokulam partially to the public for a glimpse of Kerala’s rich architectural heritage. The house also reveals the social lifestyle of times gone by. As we get to the entrance, or Padippura, Venu explains that the house is built on the principles of Thachu shastra (science of carpentry). The Padippura is the traditional arched gateway which leads into the Mukhamandapam, a small porch similar to a waiting area.

“The outsider was allowed entry into the house only after verification,” explains Venu, “and could then sit in the poomukham, a verandah that was built around the house depending on other modalities, like the size and the economic status of the owner.” The poomukham generally had seating arrangement along its low wooden wall and the mandatory easy chair on which the head of the family relaxed.

A polished central table made from a chariot wheel of the renowned Kalpathy Ratholsavam adorns the poomukham at Gokulam. Venu has used the wheel as the table top and got sculptors to fill the gaps with intricate work. A wooden elephant head is another eye-catching piece from his collection, Globe lights from the ceiling and sculptures adorn the walls.

An intriguing cluster of holes in the wooden wall is the karnasutra. This, Venu points out, allowed women to see the visitor (who could not see them) and hear the conversation. “Women did not often come out into the poomukham,” he offers as explanation. The karnasutra also offered a direct view of the padippura where a bell would signal the arrival of a visitor.

The agathalam or interior was a space only for the family. It had a puja room and bedrooms. The doors of the former open when a string of bells is pulled. A vintage aata panga (swing fan) harks back to the past. Four-poster beds adorn the rooms. A special sapramanjam made with 58 varieties of wood including sandalwood is an exquisite piece of carpentry.

A wooden elephant head with ivory tusks at Gokulam, a house built on the principles of ancient Kerala architecture | Photo Credit: Special arrangement

“The most important aspect of a Kerala house is its precise carpentry. The roof is made with rafters fixed into each other at precise points and angles. The entire house is wooden and can be dismantled and reassembled,” says Venu who visited over 100 dilapidated houses across the State to collect doors, windows, pillars, panels, rafters, locks, lights, furniture, artefacts and floor panels.

One of the rooms in Gokulam is filled with his collection of brass and bell-metal kitchen utensils. One shelf has old telephones, lamps and ornament boxes (amadapetti)

“I joined the Cochin Carnival competitions in 1998 and first participated in fancy dress. Two years I later started making floats. But Gokulam is unlike any work that I have done before,” concludes Venu.