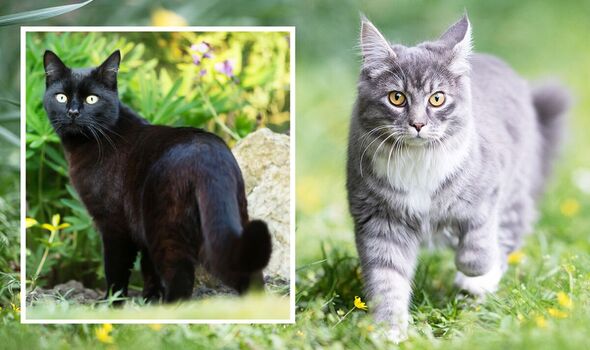 Cats using your garden as their toilet can be increasingly annoying, especially when you’re not the owner of the feline. Express.co.uk spoke exclusively to Angela Slater, Gardening Expert at Hayes Garden World about the best ways to deter cats from the garden.

Angela said: “It’s important to keep your herbaceous borders packed with plants so there is no bare soil where cats can dig.

“Ensure your soil is wet, provided it is not to the detriment to the health of the plants, as cats don’t like sodden wet soil.

“There is also a plant available in the summer, aptly named ‘Scaredy Cat’ (Coleus canina) which is said to keep cats away due to the smell it releases. However, if you have a large garden, you will need to plant a lot.

“Results from Hayes’ customers have been mixed, with some swearing by it and others saying that it is a complete waste of money.”

Either way, it’s worth planting if neighbouring cats are visiting your garden and using flower or vegetable borders for their toilet. Even if it doesn’t work as an effective deterrent, Coleus canina is an attractive perennial that forms a neat bush and bears blue flowers in the summer.

When it comes to paths, “use a sharp gravel to deter cats”, Angela added. Cats dislike walking on an uncomfortable surfaces.

“In terms of food, don’t leave scraps around after a barbecue as it will only encourage cats to visit,” she explained. Human food tastes good to cats and they can quickly develop a liking for it and lose their appetite for cat food.

However, there are some foods cats don’t enjoy – bananas and citrus peel and these are “said to repel cats”. Angela said: “If you have a large garden you will have to spread an awful lot otherwise, they will just move out of range of the offending material.”

“Another hack is using lion poo to deter cats,” Angela explained. “If they think there is another cat around, they will move to a cat-free territory.”

In 2000, lion poo was the number one cat deterrent in a trial by BBC’s watchdog, which found it to work within three hours of application, the RHS noted.

One application is also said to last up to three months. Simply scatter the pellets.

“It’s always an option to install an automatic deterrent, such as a sprinkler system or a high-pitched noise system,” the expert said.

Some cat repellent devices emit ultrasonic sounds only audible to cats, and they can be placed in specific areas, such as around bird feeds.

Water devices also spray a jet of water in the direction of anything that passes in front of it – including cats – and since cats hate water, a sharp blast of water might stop them from returning. Just be mindful of other wildlife that uses the garden, such as hedgehogs, as they can be targeted by the water jets too.

“If all else fails, you could place a litter tray outside to encourage cats to use a designated area or leave an area of bare soil out of sight and smell of the house,” Angela suggested.

You don’t need to spend much money, you can build a cat litter tray yourself by using a shallow box.

About Angela Slater
Angela holds a degree in Conservation and Land Management, and has had an active interest in gardening since the age of six. She has been in the gardening industry since joining Hayes, but only directly involved since 2001 when she left university and joined the outdoor plant team. She has worked for Hayes for 33 years in various guises, including part-time when she left a management position to attend university full time.