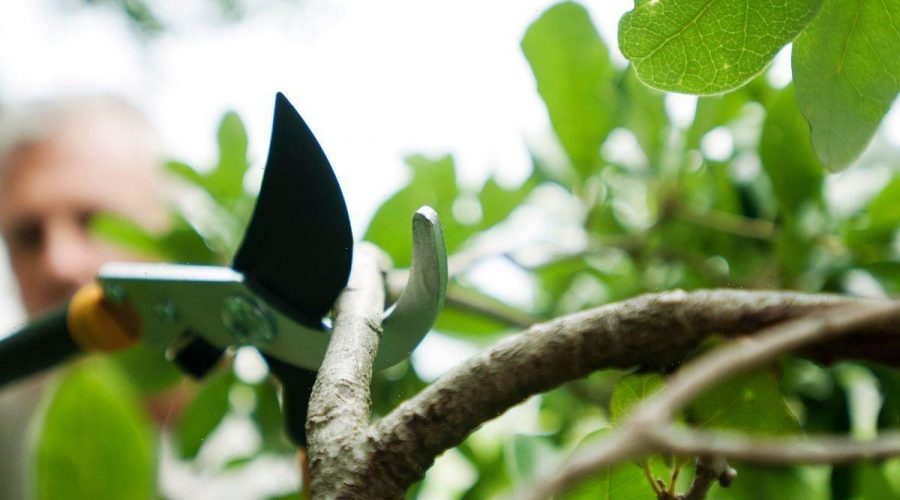 Winter pruning takes place during the colder months of the year, when plants are dormant, meaning they are not in active growth. Not all plants are suitable to pruned at this time of year, and some should be given a haircut in spring, summer and autumn instead, so it is important to know what to prune now.

The aim of pruning is to improve the tree or shrub’s structure and encourage healthy growth and it involves selectivity removing branches.

Wisteria is pruned twice a year, according to the Royal Horticultural Society (RHS), once in the summer and once in the winter.

This will help to keep it in shape and promote flowering. To prune wisteria, the RHS recommends cutting back to two or three buds to tidy it up before the growing season starts.

The experts added: “With older plants severe pruning may be needed to remove old, worn-out growths, or branches growing over windows or protruding outwards from the face of the building.”

Gardeners should cut back bush and climbing roses in late winter to promote growth, and encourage plenty of flowers during the summer months.

To prune roses, cut back by requirement amount, shaping the flower as you go. In the process, remove any dead, diseased and damaged stems, disposing of any foliage that remains.

Not all roses should be pruned now though, only shrub roses, climbing roses, hybrid teas and floribundas. Other varieties such as rambling roses can be pruned in late summer.

“Shorten the previous year’s growth on each main branch by about one third to a bud facing in the required direction.

“This will encourage the development of new branches and spurs and maintain a good shape. Leave young laterals unpruned so they can develop fruit buds in the second year.”

Acers can be lightly pruned over the winter months when they are dormant to remove any wood. If you need to reduce its size, be careful when cutting into the older wood.

When pruning, gardeners should make sure they use clean and very sharp secateurs to make clean cuts throughout the plant.

The RHS recommends pruning young acer trees to around 16 inches in the first winter.

To do so, make cuts just above two pairs of strong shoots. After this initial winter prune, the RHS said to shorten these shoots by about a third to encourage them to branch in the spring.

In the second winter, prune out dead or damaged shoots while shortening the main shoots. In the following winter, remove very low branches and shoots growing into the centre of the tree.

Gardening experts at Sutton Manor Nursery explained: “With all the overgrown shrubs from the previous months, it is understandable that you are eager to start getting your shrubs in shape.

“However you mustn’t overdo it. If done too aggressively, it can permanently damage a plant and stunt its growth and make it susceptible to diseases.”

In the warmer months of the year, it is also important to provide shade to plants and pruning them too much can make them extremely vulnerable to the sun.

Pruning can often stimulate new growth and unfortunately, the new growth may be killed off during the winter months. This is because it can get extremely cold and new shrubs are often not able to cope.