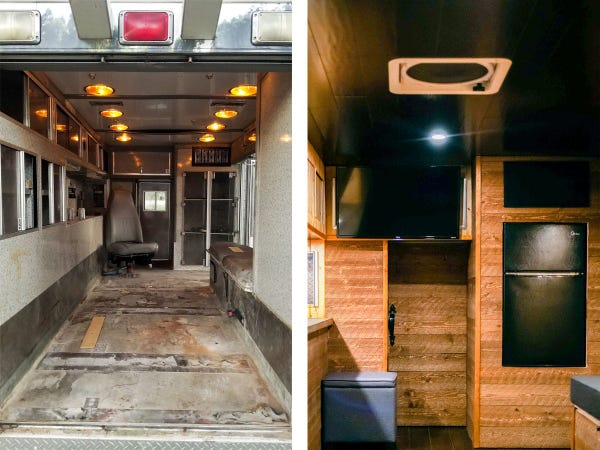 Michael Talley told Insider that he found a used ambulance on Craigslist in late 2018. At the time, the vehicle belonged to a landscaping company. 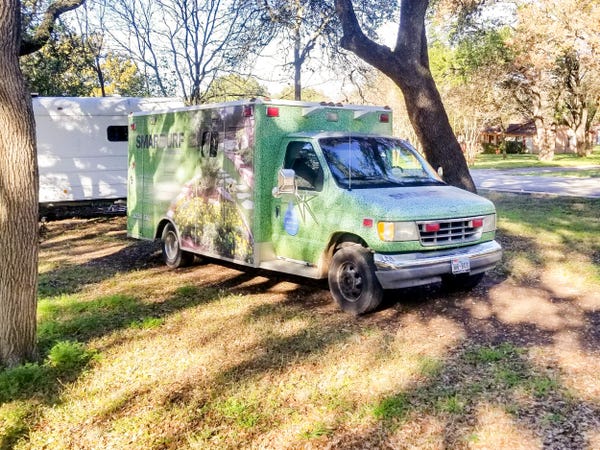 The ambulance was no longer being used for medical purposes. At the time, the vehicle served an Austin-based AstroTurf landscaping company.

After renovating a school bus and a van, Talley wanted a new challenge. He found this 1992 Ford E-350 7.3 Diesel on Craigslist for $4,500, due in part to its incredible engine, he said. 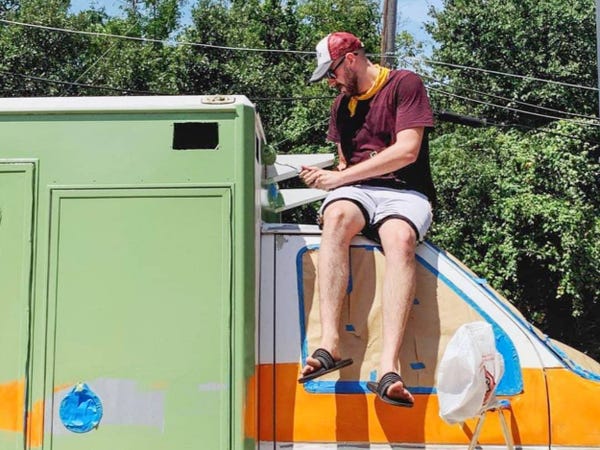 After relocating electric boards, rewiring electrical, and cleaning out mold, Talley took some time in the empty space to imagine what the home would look like. 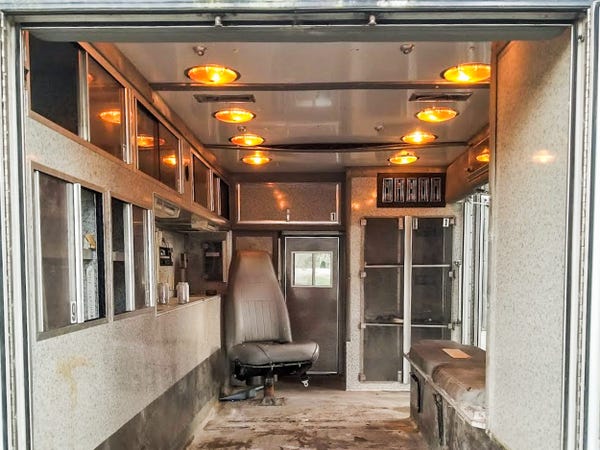 "It's always easier to build something new than to try to alter something that already has been built," Talley told Insider. Envisioning the final product is one of Talley's favorite parts of the process. 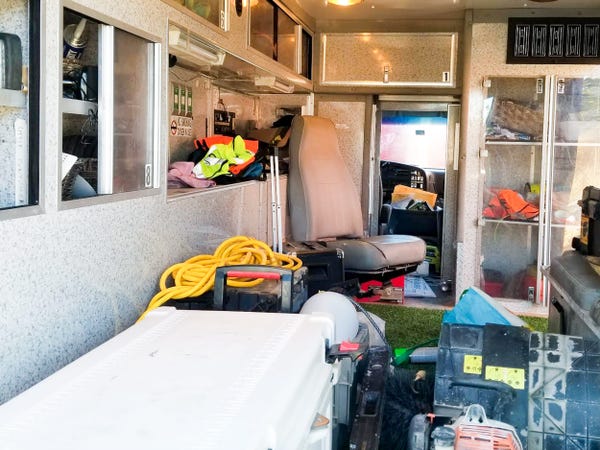 Talley utilized the bones of the ambulance's layout to his advantage. For example, he used these countertops for the kitchen. 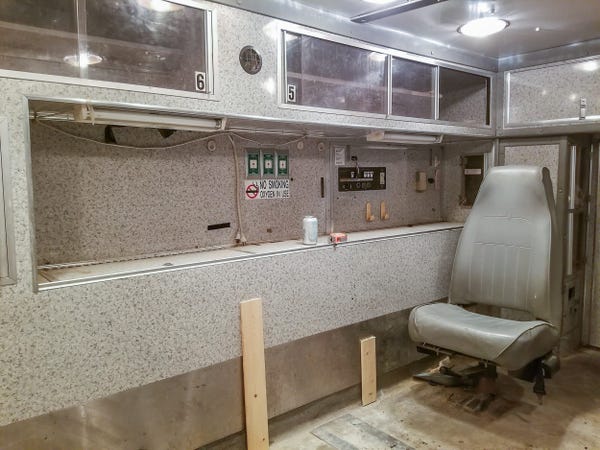 Knowing where the kitchen would be located helped Talley plan a layout for the rest of his vehicle. 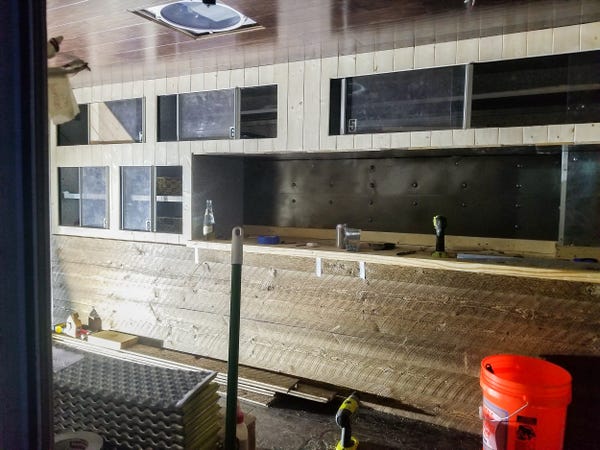 Talley prioritized fitting a king-sized bed in the ambulance because he is well over 6 feet tall. 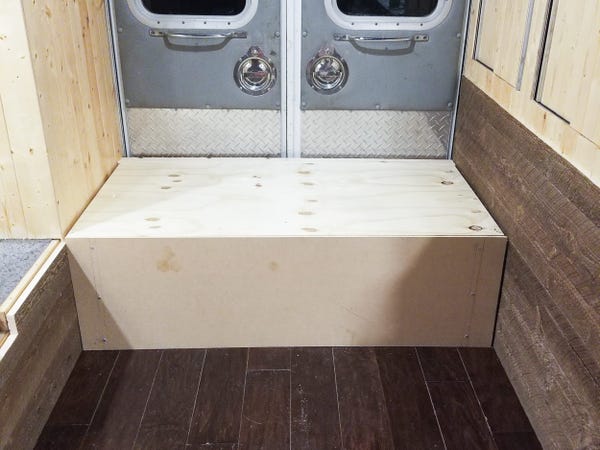 To do this, Talley constructed a bench that converts into a bed three times its size. 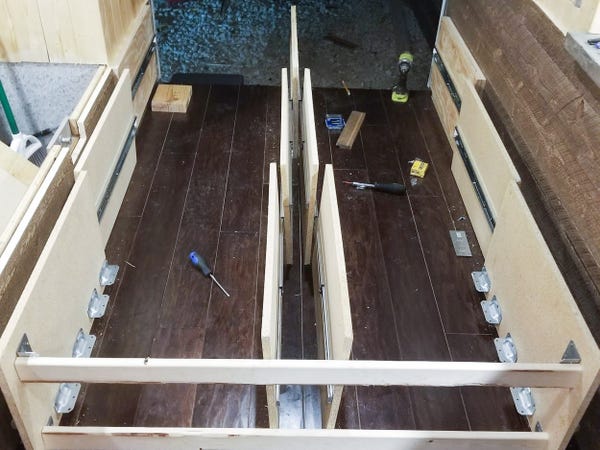 This way, his feet didn't hang over the bottom of the bed while sleeping. 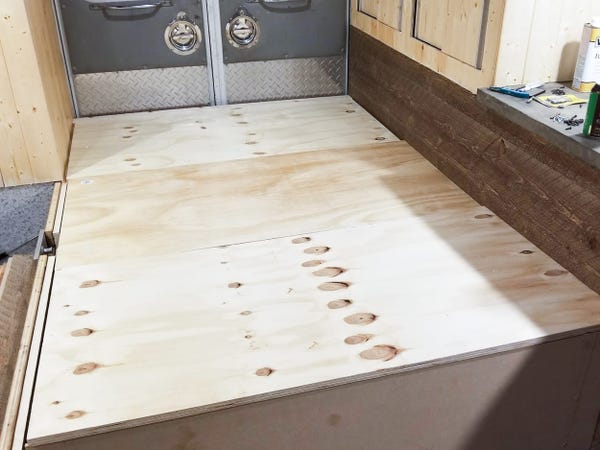 Throughout the renovation, Talley used a variety of materials, including concrete countertops, a copper backsplash, … 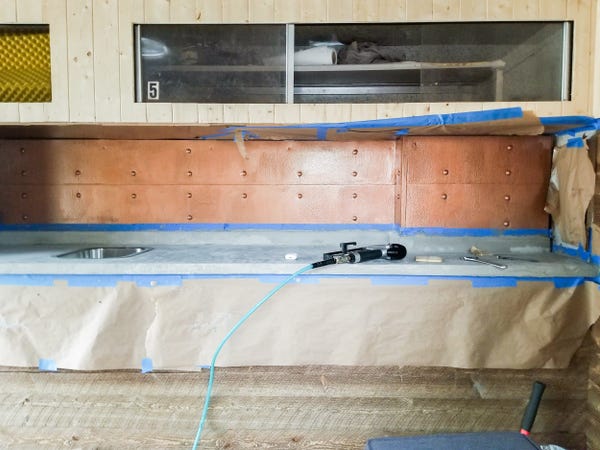 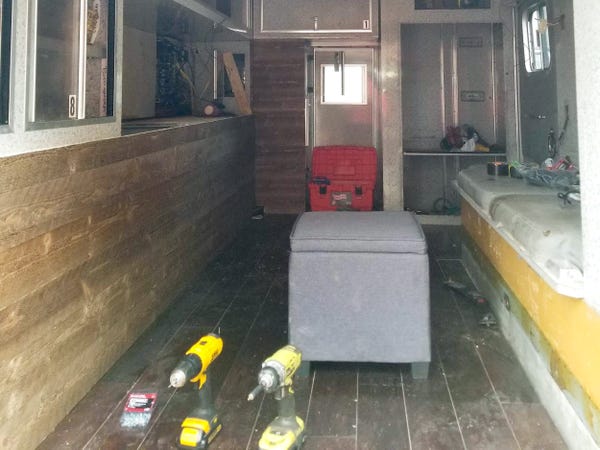 Talley told Insider that he got the lumber for this build from various suppliers. 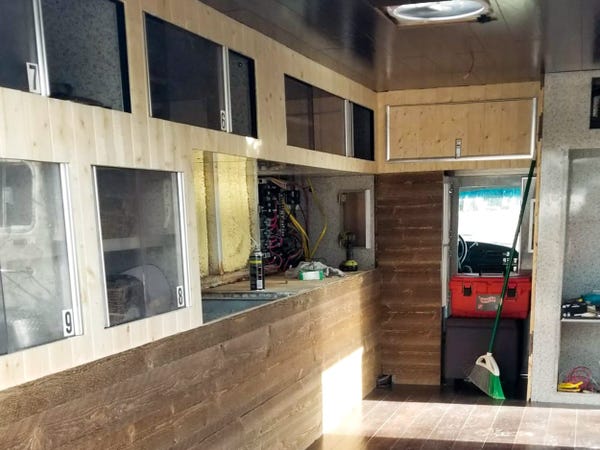 To the right of the kitchen counter, Talley installed a fridge and a freezer. 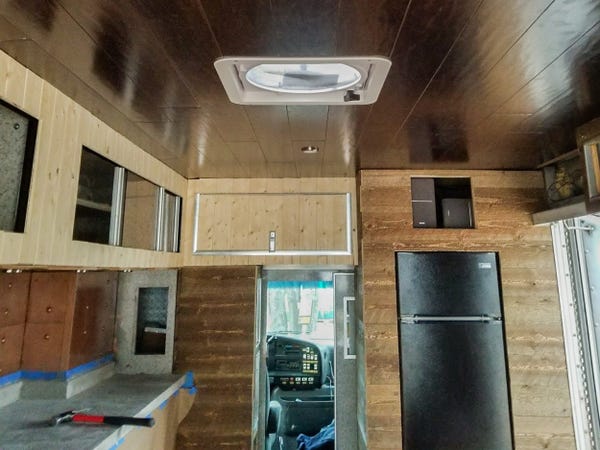 Talley told Insider that space is a hot commodity in a tiny home, so he tries to keep it as spacious as possible by not stuffing too many features in it. 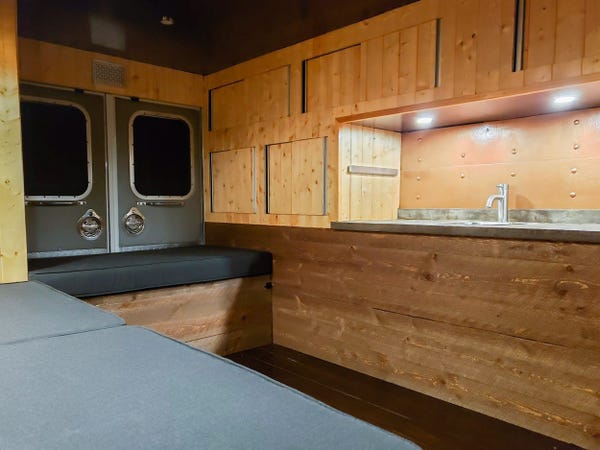 For example, this home didn't have a bathroom or shower, but Talley said when he was living on the road, it wasn't really necessary. He could always go to a gym to shower and use public restrooms. 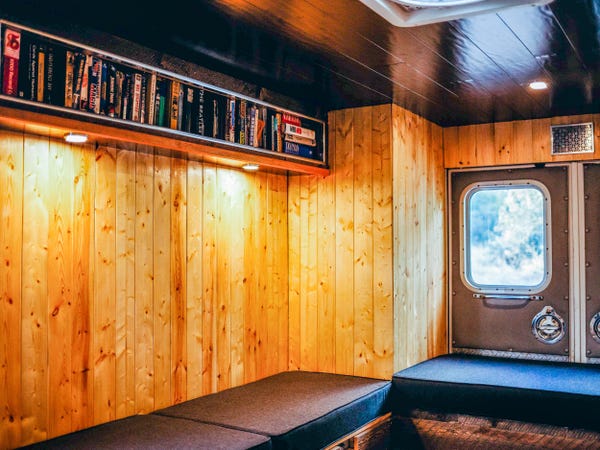 Instead, he saved room for a comfortable bed and still felt like he had plenty of extra space to move around. "You realize how much more time you spend outside of it than you do in it," Talley said about living in a vehicle. 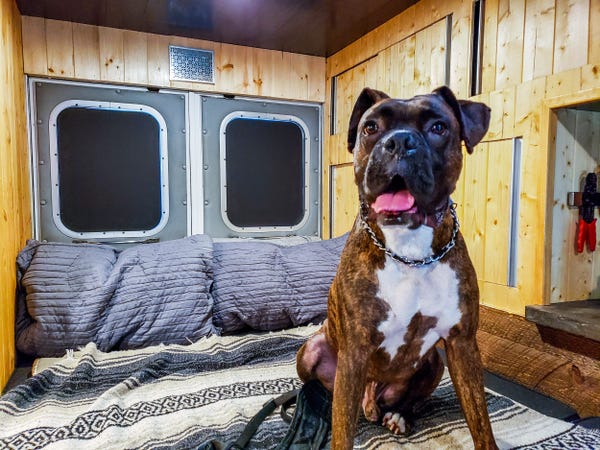 Talley said it's best to think of your bus, van, or ambulance build like a really nice car when it comes to designing your layout, instead of a really small house. "The smaller you go, the more flexibility you'll have on the road," he said. 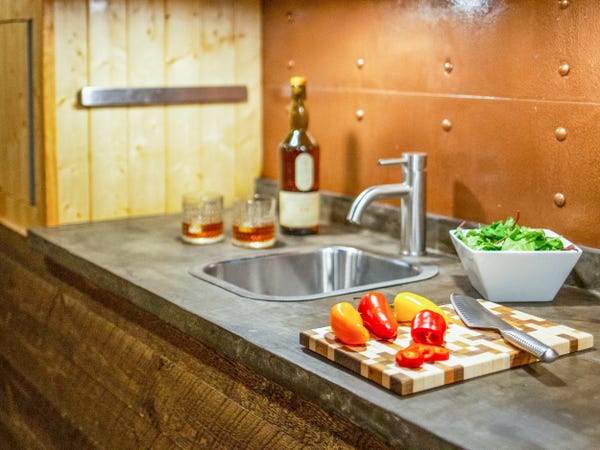 Talley told Insider that the paint job was one of the hardest parts of this project. First, he had to scrape the AstroTurf and decals to prep it for a new color. 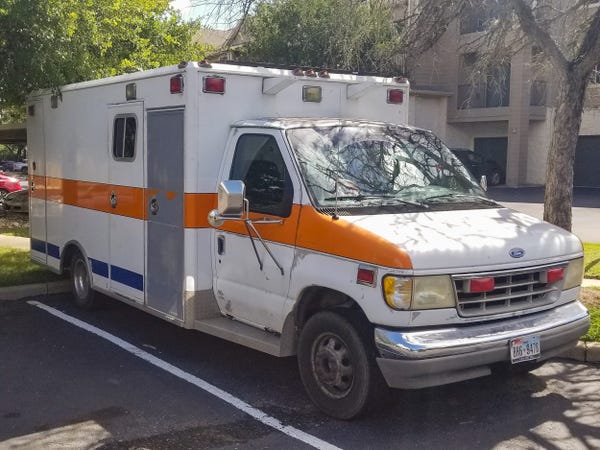 Then he decided on a style. Inspired by old Chevy Suburbans, Talley went with a vintage green with a white pinstripe. 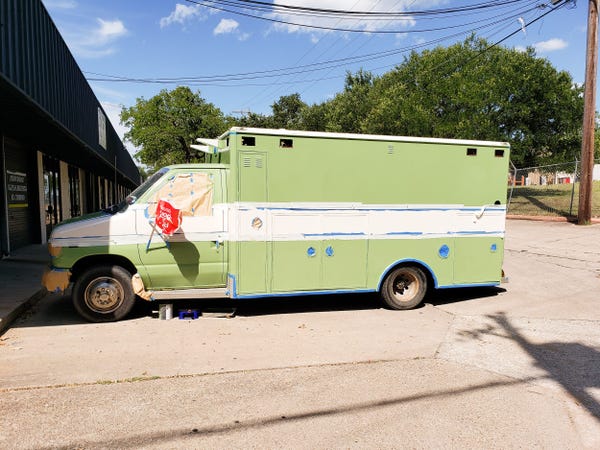 Outside the ambulance, Talley used an industrial locker for storage space. 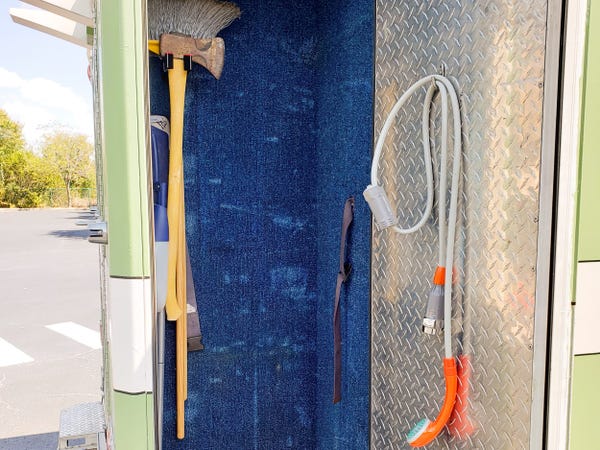 On the rooftop, Talley installed a solar panel. The ambulance had 600 watts of solar and Lithium-Ion batteries. Talley had the seller throw in some additional Astroturf when he bought the vehicle and used it to make a small golfing green. 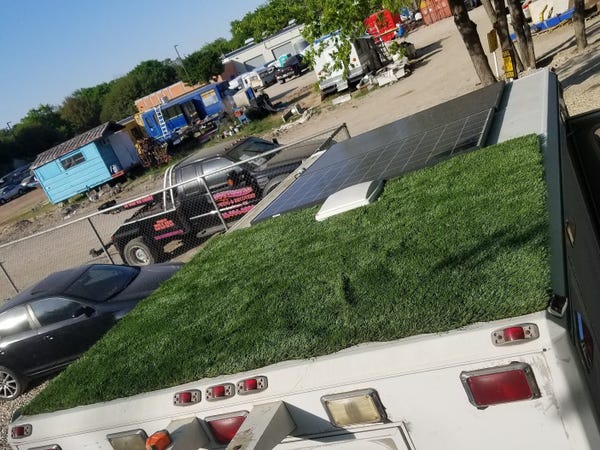 Talley left the driver's area as it was. 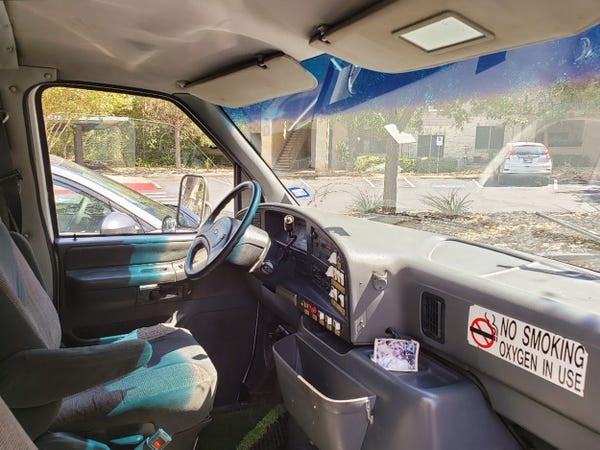 Back in the living space, a barn door leads to the driver and passenger seats, just behind the 42-inch TV. 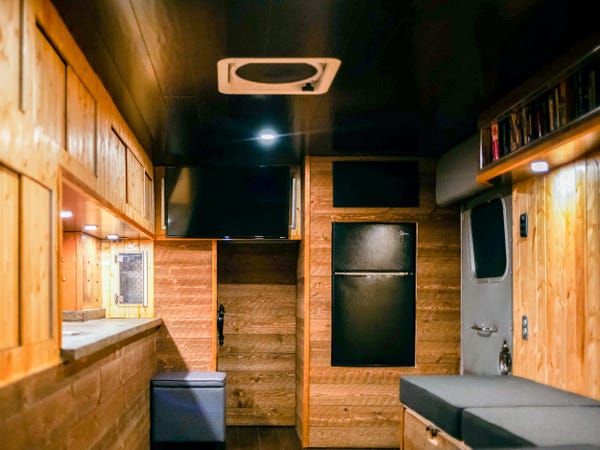 This is what the finished product looked like, which Talley lived in for half a year before selling it for $30,000. 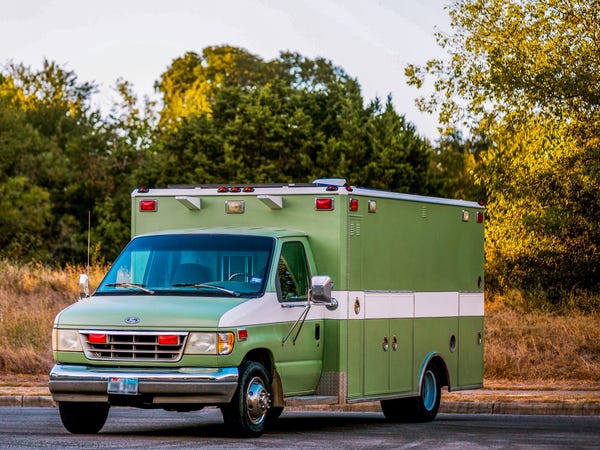 Talley is working on another ambulance build now, and this one will have a bathroom, he told Insider. 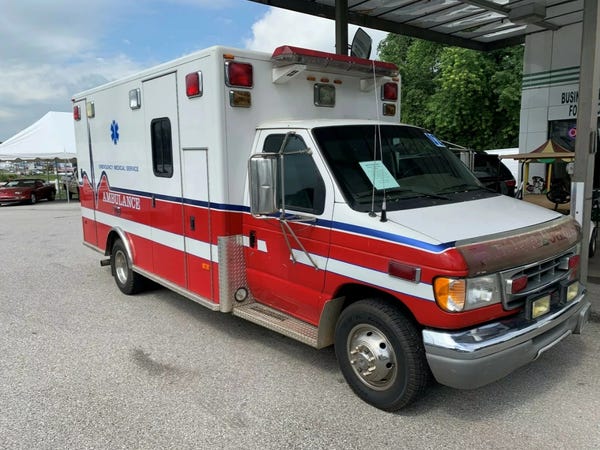 10/21/2020 Home and Garden Comments Off on A Texas man bought an old ambulance from a landscaping company for $4,500 and spent $10,000 converting it into his dream tiny home. Here’s how he did it.
Recent Posts
We and our partners use cookies on this site to improve our service, perform analytics, personalize advertising, measure advertising performance, and remember website preferences.Ok