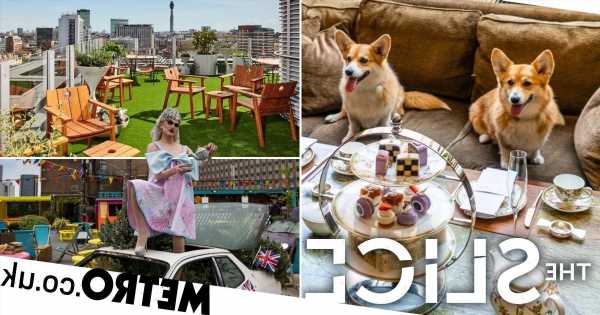 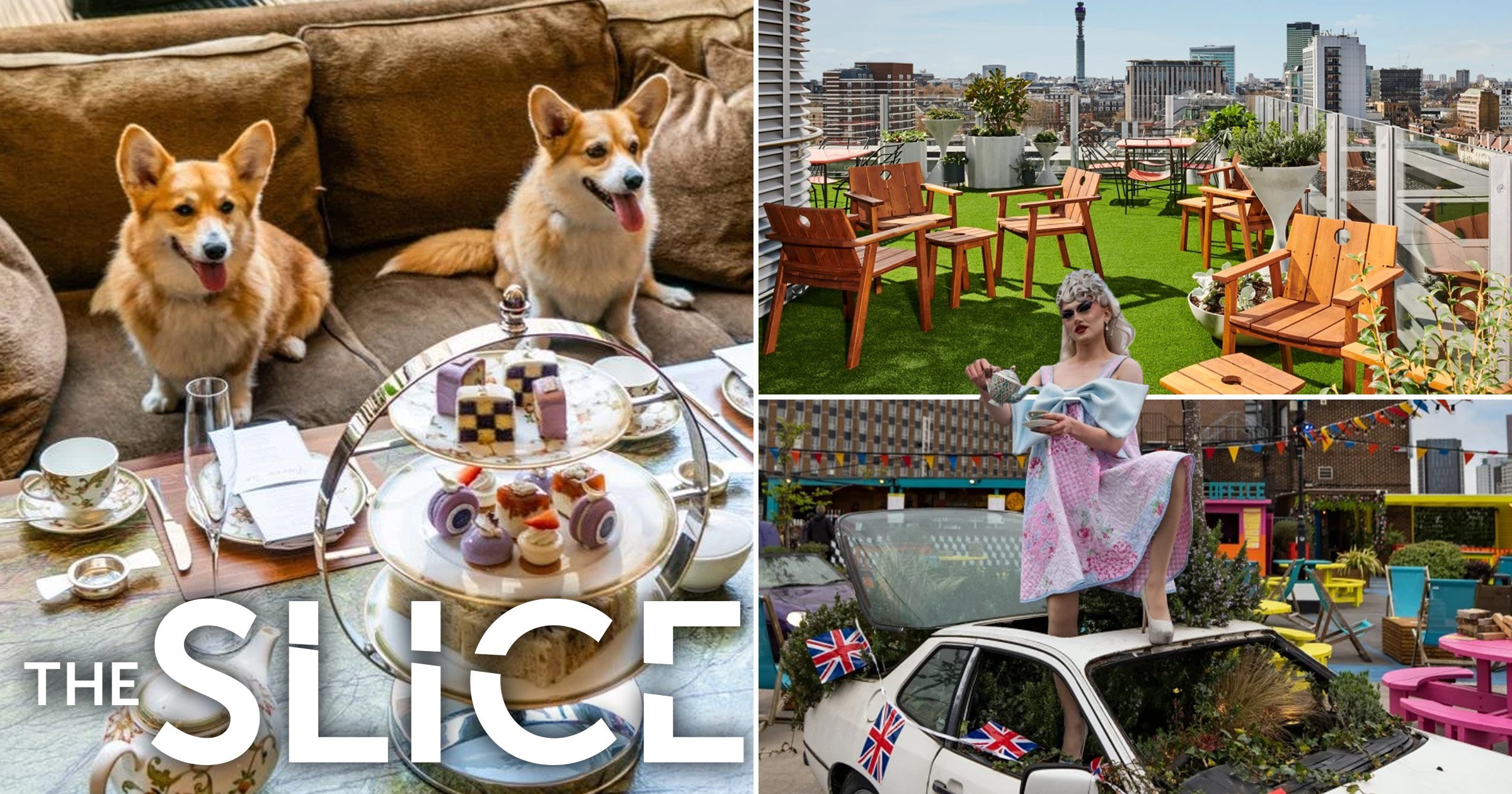 Not that you have to be a monarchist to get stuck into the goodies being lined up for this fantastic four-day Bank Holibobs weekend – from Street Parties in the Sky through recreations of The Mall in east London to drag brunches, food-based street parties… you can even meet the corgis from The Crown.

HMTQ – Her Majesty the Queen: we can’t be expected to say it in full all the time! – may be celebrating 70 years in the job but she has nothing on the Theatre Royal Drury Lane, the oldest theatre in London, that has hundreds of years on our monarch.

And they are certainly pushing the boat out to celebrate the Jubilee with a heightened Regency High Tea by Lily Vanilli in the glamorous Grand Saloon and a brand new cocktail cooked up especially for the occasion called The Queen’s Punch.

You can even go on the Royal Theatre Tour after hours to see where the magic happens.

Mother of all parties

They’re offering Tea with the Queen over at Mama Shelter, perhaps the nuttiest hotel in all of east London, but we have a sneaking suspicion HMTQ might be busy this Bank Holiday Weekend. Just an inkling we have, it’s not like we have access to her diary.

Consisting of dinner and bottomless bubbles (that’s how we like our bubbles!) hosted by East London Royal Family member Miss Demeanour assisted by Tomara Thomas and Camille Leon in the gorgeous courtyard garden bar, it will have DJs, lipsynch battles, diva classics from various queens of pop from Britney to Beyoncé and the prize of a night’s stay for the person deemed to be the best dressed. We are absolutely having that!

Yeah, you may be going to a street party to celebrate the Jubilee, but are you going to a Street Party In The Sky? No, right? Well, you could be if you get yourself down to what is maybe London’s coolest hotel, The Standard in King’s Cross.

Up on their roof, which has 360-degree views across the capital, they are laying on DJs playing sunshine soul, dub and house, with cocktails to keep the party rolling while we’re actually thinking of taking a room, so we can pop down to reapply, especially as over the Queen’s Jubilee weekend, they are including a slice of chocolate cake baked for the occasion by royal wedding cake baker, Claire Ptak of Violet Cakes. And not to mention a bottle of champagne!

A right royal knees up

It’s a Jubilee celebration but with a difference over at Roof East’s lunchathon, and that’s the first time we’ve ever heard that word. We like it!

Join us face down in Naughty Burgers washed down with Jubilee-style cocktails as you enjoy perhaps less-than-respectful performances by local drag artistes Kyran Thrax and Polka Dot.

We’re expecting bunting, corgis, crowns, Lipsync For Your Life contests, a sexy dad contest (we like the sound of that!), songs, games and great views.

Oh and a car with a tree growing out of it in what’s described as an adult playground, a 30,000 square foot party space in east London. We’re lucky in that we look great in red, white and blue.

Why travel up west to get to the Mall, when you can head east and enjoy Truman’s Social Club’s recreation of HMTQ’s ‘hood’: a tree-lined street draped in Union Jacks, a projection of Buckingham Palace and real thrones for all your Insta opps.

That’s the backdrop for four whole days of jubilations with singalongs, a classic village fête, a Big Lunch, a baking competition judged by a real life Great British Bake Off contestant, mass karaoke from Massaoke, DJ Jaguar Skills, a Caribbean carnival with food…

Seriously, is there anything they’re not doing over the weekend? Family disco? Got it. Dancing through the decades? Yeah, already planned. We might move in Thursday and just, you know, stay.

They reckon they’re going to Let The Town Wear The Crown this Jubilee weekend over at Kerb’s Seven Dials Market in the heart of London’s glittering West End for those of us who want to celebrate with foods and drinks.

Basically, it’s a round-up of local food businesses with DJs, cocktails, and food glorious food with Banana Warehouse and Cucumber Alley hosting plenty of free food and non-food-based activities – hooray! – from cooking competitions to live music with a BMC Radio takeover, which means dancing until midnight while kids are catered for with face-painting, balloon-twisting and crown-rocking. Something for everyone and then some.

You want to celebrate the Jubilee… but you can’t be bothered. We feel you. That’s why we’re pointing you in the direction of Bubbleshop, the online champagne outlet, where they have put together the perfect pairing for the Jubes weekend.

You get a Coronation Chicken spice kit created by two-Michelin starred chef James Knappett (Goan curry spices, instructions… you just come up with the chicken and the bread to make it all into sandwiches) with a bottle of Jean-Marc Seleque’s Extra Brut champagne to wash your creation down with.

Fit for a Queen and the perfect accompaniment to a busy weekend… watching it all on the telly. We’re not judging!

Those foodies amongst us are already well aware of the delights of Panzer’s in St. John’s Wood, one of London’s oldest – 75 years and counting! – and most famous delis.

Well, they are getting in on the Jubilee act with a street party with lashings of food and drinks served up to accompany kids’ games, face-painting, raffles…

Oh and when we say food, we actually mean Panzer’s famous smoked salmon bagels with oysters, a giant truffle pasta wheel, hot dogs and scones with jam and clotted cream.

Oh and Pimms! Or if you just want some of that goodness delivered to your door, get online and order up, for goodness sake.

It doesn’t come much fancier than the Four Seasons Hotel, so if you really want to do some justice to the whole Jubilee weekend thing, may we point you in their direction for a special Jubes-related afternoon tea (we’re going for the glass of champagne because that’s how much respect we have for HMTQ, we’re not sure about you…).

This takes place in the gorgeous Amaranto Lounge or, if it’s warm, on The Terrace, with specially created Jubilee macaroons and a royal wedding fruitcake.

And if you go down on Sunday, you get to meet the actual corgis from The Crown! Think of the photos you’ll get!

In the swing of things

It may not sound like top larks – the Belgravia Trader’s Association – but think about it, it’s just a bunch of shops and restaurants in one of the world’s fanciest areas getting together to lay on a street party.

And you know how we love fancy. It all goes down on Sunday and we’re promised food and drinks from Ganymede’s al-fresco bar (lobster rolls!), English fizz from Coates & Seely, cocktails, craft beers, ales all washed down with live swing music (told you it was fancy!), horse and carriage rides (fancy plus!), a photobooth, stuff for kids and the national anthem performed by Twickenham favourite Alicia Lowes! Just please don’t wear those jeans!

It may not be a respectful or dignified way to celebrate the occasion of Her Majesty’s Platinum Jubilee but it will most definitely be a whole lot of fun.

It’s the Queens of Pop Drag Brunch at The Folly, where the likes of Mariah and Beyoncé and Britney and Aretha will be celebrated under the aegis of Ruby Murray with circus acts, a drag extravaganza and an epic brunch.

So get your Geri Spice Union Jack dress back from the cleaners, don’t stint on the slap and get yourself down there, though you could always just come as you are.

We actually admire you for always putting comfort first and never mind what you look like! We wish we could be more like that *coughs*