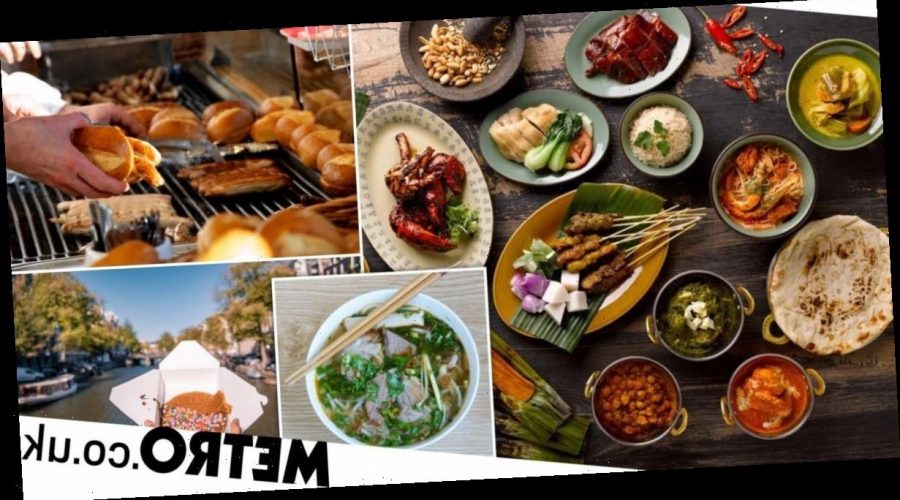 One of the best things about travelling the globe is trying amazing world cusine – and there’s nothing better than hot, fresh street food.

And the good news is that even if we’re not able to travel at the moment due to Covid-19 restrictions, we can still feel like we’re away from home by taking inspiration from our adventures’ best dishes.

From the food markets of São Paulo to enjoying stroopwafel on a dutch canal, here are some of the best culinary experiences the world has to offer.

Singapore’s food scene dates back to the 1800s, when its status as a trading hub meant entrepreneurs from all over the Malay archipelago flocked there to make their fortune.

Many set up food stalls and Singapore’s food scene is now one of the most diverse in the world – you’ll find Chinese, Indian, Indonesian and more.

In the late 1900s, the government started building hawker centres, and you’ll find these all over Singapore, whether it’s Little India’s Tekka Centre or the Newton Food Centre. Check out StraitsKitchen at the Grand Hyatt Singapore, where you can sample hundreds of dishes prepared at theatre-style kitchens specialising in different types of cuisine.

Lima boasts some of the best street food in South America. Ceviche – chunks of raw fish cured with lemon juice – is a favourite dish, closely followed by picarones (pumpkin and sweet potato doughnuts drizzled with syrup) and mazamorra morada, a tooth-rottingly sweet delicacy made with purple corn.

Popular places to fill up include Al Toke Pez in the Surquillo district, a no-frills restaurant where owner Toshi serves up six types of ceviche, and Miraflores’ Picarones Mary for delicious picarones.

Amsterdam’s street food scene is seriously underrated. Dishes to put at the top of your hit list include raw herring, which is served at haringhandels, or herring carts, throughout the city (ask for a broodje haring for a takeaway), stroopwafels (a layer of caramel sandwiched between wafers) and kroketten (meat and potato croquettes, eaten with mustard).

A great place to order the last of these is one of the city’s FEBO vending machines. Here you will also find the likes of kaasouffle (deep-fried cheese) and a variety of sausages.

No foodie should leave São Paulo without paying homage to the city’s street food scene at Mercado Municipal de São Paulo, a food hall filled with hundreds of vendors. Start with the Hocca Bar, where you can grab one of the city’s famous ham, mustard and cheese sandwiches, or a pastéis de bacalhau – a salt cod fritter.

Elsewhere, keep an eye out for coxinhas (deep-fried balls of batter with a variety of fillings, though chicken is most popular), and pastels, which are dainty pastry parcels encasing meat, cheese, shrimp or sweet fillings such as guava paste, banana and chocolate.

Osaka is famous for its culinary skills and one of the best places to experience this is Shinsaibashi-suji, a covered street known for its animatronic seafood signs and mind-boggling range of food.

The food is sold at tiny stalls and vending machine restaurants, where customers order and pay before entering. Unmissable dishes include okonomiyaki (savoury pancakes with shredded cabbage) and takoyaki (battered snacks filled with octopus).

Don’t forget to check out Osaka’s famous depachikas (food halls in the basements of department stores).

The Vietnamese put their stamp on the French baguette, adding chilli and other local ingredients. The best place to grab one is Banh Mi Huynh Hoa on Lê Thi Riêng, where you’ll pay around 80p for a hot, fresh baguette stuffed with deliciousness.

The accolade came with certain conditions – a Nuremberg bratwurst must be made within the city limits, using the original recipe, which includes pork, sheep’s intestines, marjoram and other spices.

The finger-sized sausages are sold at hundreds of bratwurst stalls throughout Nuremberg and the most popular version is a delicious hat-trick known as Drei im Weggla (three in a bun) – three sausages stuffed inside a bread roll.

Get in touch by emailing MetroLifestyleTeam@Metro.co.uk.