Chick-fil-A is once again teenagers’ favorite restaurant chain. It is the chicken chains fourth time making the top of the list.

The Internet has fallen in love with a Chick-fil-A employee from North Carolina who may indeed be the most pleasant person to ever work a drive-thru lane.

Jeremiah Murrill, who works at the Oleander Drive location in Wilmington, was recently filmed taking a customer’s order on a chilly December day — but that didn’t seem to do anything to dampen his demeanor.

The video, filmed by customer Toya Liles, shows the extremely polite Murrill taking her order car-side, wearing a winter jacket and cap. During the process, he compliments Liles and her passenger for being “very good” at the whole process, and even commends them for their “amazing ordering” just before swiping Liles’ credit card on his point-of-sale machine.

“You’re one swipe away from an awesome lunch, ma’am,” he tells her at one point.

Just before the customer drives away, however, Murrill informs her that he isn’t done with her just yet.

“It’ll be a pleasure serving you at our drive-thru window after two more things — do you know what that is?” he asks. When no one replies, he answers: “That’s a fist-bump each. You guys are awesome.”

Liles later shared the video to her Facebook page, where it has racked up nearly 190K views in just two weeks.

“Luv this young man,” she wrote, adding that Murrill is “like this ALL the time.” 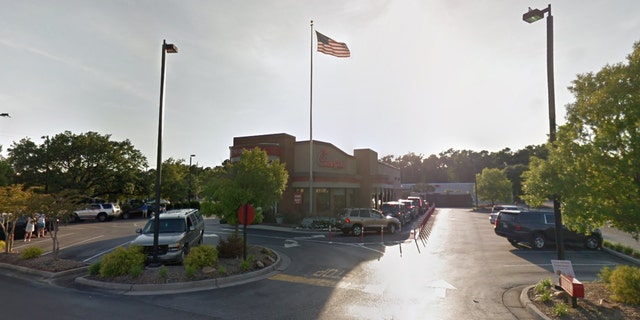 Toya Liles decided to film Jeremiah Murrill during a recent visit to the Oleander Drive location in Wilmington, N.C. After sharing the footage to Facebook, dozens of other commenters claimed they, too, had been waited on by the ever-friendly Murrill.
(Google Maps)

Facebook users who commented on Liles' post were largely flabbergasted by Murrill's disposition. Dozens claimed that he had waited on them personally.

"You could literally be having the worst day and he would turn it around," another Facebook user wrote. "I truly miss this location because of him!"

Murrill, 20, later told WWAY that Liles, a frequent customer, had actually asked if she could film him that day, and he “didn’t think anything of it,” as he always aims to be “kind and nice” to the people who stop by the restaurant.

The Chick-fil-A employee is also well known by many of the location’s repeat customers, who say he treats them all to the same chipper service.

Murrill – who is one of five siblings employed by this Wilmington location – also told WWAY that he hopes to one day own his own franchise, with plans to continue his love of serving the community.

“Your actions, your behavior, or the way you interact with people matters,” Murrill told the outlet. “It can transform a day.”

12/30/2019 Food & Drink Comments Off on Super-friendly Chick-fil-A employee in North Carolina charms Internet in viral vid: He's 'like this ALL the time'
Recent Posts
We and our partners use cookies on this site to improve our service, perform analytics, personalize advertising, measure advertising performance, and remember website preferences.Ok