When Subway comes to mind, you most likely think of the sandwich chain’s deli meats, tuna melts, and, of course, its timeless meatball sub. But the Connecticut-based fast food giant is about to start testing a brand new meatless option, which vegetarians and Meatless Monday participants alike will definitely be able to get behind. Subway’s new Beyond Meatball Marinara Sub is about to make its way to restaurants incredibly soon, and in all seriousness, it’s about to make you completely reconsider your typical order.

On Wednesday, Aug. 7, Subway released some undeniably delicious news: The chain established an official partnership with popular plant-based food company Beyond Meat to recreate its famous meatball sub. It will officially hit menus starting in September 2019 for a limited time, according to the press release, and will be added to menus in almost 700 participating restaurants throughout the United States and Canada. So, chances are you’ll be able to find one near you. I don’t know about you, but I’m seriously excited to try it.

The new Beyond Meatball Marinara, according to the press release, features the first-ever Beyond Meatball. The ground-breaking delicacies are drenched in classic marinara sauce and melty Provolone cheese, before getting sprinkled in a handful of grated parmesan. Then, all of that is spread across a bed of slightly crunchy toasted sub bread. Like I said, it’s quite similar to the staple meaty sandwich, sans the meat. Oh, and you’ll be able to add them to whatever sandwich you please — they aren’t exclusive to the Beyond Meatball Marinara, so if you want, you can get creative and combine them with any toppings you’d like. 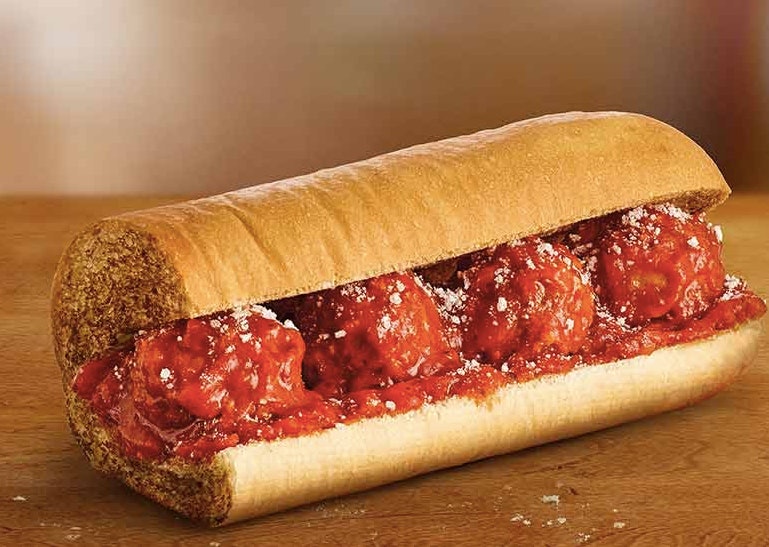 In the press release, Len Van Popering, Subway’s Chief Brand and Innovation Officer, said one of the chain’s major strengths is that it offers such a wide variety of items that manage to appeal to just about everyone. And with a new meat substitute, it can now include an even wider range of customers than ever before.

According to the press release, Popering said:

Shockingly, Subway isn’t the first fast food chain to partner with Beyond Meat. In fact, Dunkin’ is currently testing a Beyond Sausage Breakfast Sandwich for a tasty new way to start the day. It features a Beyond Sausage patty, egg, and American Cheese on an English Muffin, with each sammy going for a suggested retail price of $4.29. Honestly, I’m about to order one as we speak.

Maybe you religiously follow a plant-based lifestyle, or you might simply be seeking out a meat alternative every once in a while. Regardless, Subway’s new Beyond Meatball Marinara is about to be my new go-to sandwich. And keep in mind, like the regular sub, diving into one of these will definitely require a plethora napkins — those babies are messy AF.

08/07/2019 Food & Drink Comments Off on Subway’s New Beyond Meatball Marinara Sub Test Item Is Coming So Soon
Recent Posts
We and our partners use cookies on this site to improve our service, perform analytics, personalize advertising, measure advertising performance, and remember website preferences.Ok