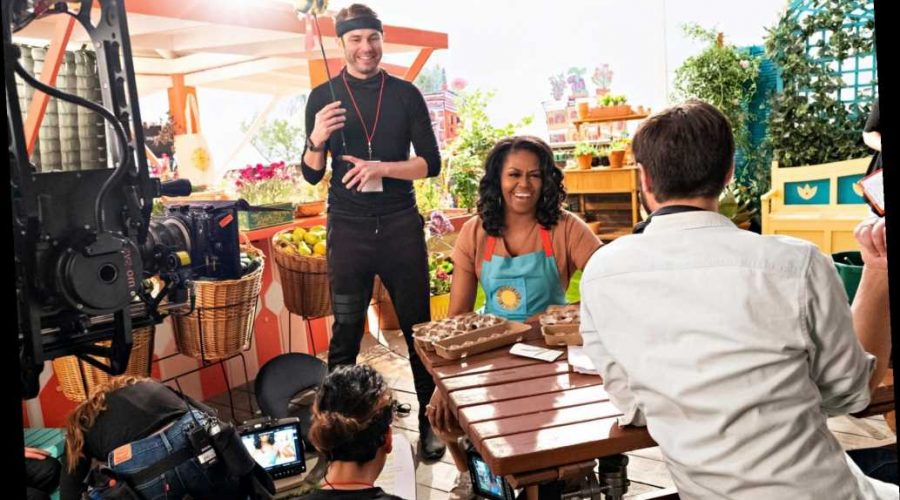 Starting next week, Netflix viewers will see the former First Lady in an unexpected role, starring alongside puppets and guest chefs who teach kids to prepare healthy foods, in a show that even grownups will enjoy, she says.

For this week's cover story, Obama, 57, talked to PEOPLE about her new series, which debuts on March 16. "Waffles + Mochi, the entire concept is fun. It's approachable, it's an adventure, it's exciting, it's funny," she says. "More importantly, it's something that I would watch even if no kids were around."

"I know the importance of family programming, having things that moms and dads can sit down and watch and enjoy together with their kids," she adds. "Waffles + Mochi just really hit it right on the mark." Obama will both star in and executive produce the show. According to Netflix, the series will follow two puppets named Waffles and Mochi who "blast off on global ingredient missions, traveling to kitchens, restaurants, farms and homes all over the world, cooking up recipes with everyday ingredients alongside renowned chefs, home cooks, kids and celebrities."

For more on Michelle Obama, pick up the latest issue of PEOPLE, on newsstands Friday.

You can get an exclusive sneak peek of the show above in a clip from an upcoming episode centered around corn as the main ingredient. An unrecognizable Rashida Jones works with Waffles and Mochi to present a winning cornbread recipe for Obama to test out.

Also in PEOPLE's cover story, Obama jokes to PEOPLE that a puppet cooking show is a better fit for her to star in than any other show, say, like Netflix's romance drama Bridgerton.

"First of all, I'm not an actress, so Waffles + Mochi is an easier lift for me because I'm being myself," she tells PEOPLE. "And it got me back into the space of kids and healthy eating and introducing them to vegetables… what we talked about for eight years in the White House. Whereas Bridgerton, the love scenes — I don't know. I'd pass."

Obama notes that while Waffles + Mochi is meant to be "fun and educational" it also will "make an impact on hunger." As honorary chair of Partnership for a Healthier America, Obama — and her new puppet friends — are going to work on America's growing hunger crisis. Watch the full episode of People Cover Story: Michelle Obama on PeopleTV.com or on the PeopleTV app.

Their "Pass the Love" campaign aims to deliver 1 million healthy meals via boxed kits modeled after Blue Apron-type services to families across the country struggling with food insecurity. The boxes will include ingredients and recipes based on episodes of Waffles + Mochi.

"We're focused on ensuring that the millions of families experiencing hunger have access to fresh and affordable nutritious food," says Obama. PHA president and CEO Nancy E. Roman tells PEOPLE that Obama has conveyed an infectious positivity as a champion of good nutrition since her days in the White House when she aimed to involve kids with a garden there.

"We hope that the show in combination with her support and status will lead to reattaching joy and value to food," says Roman, "and helping many families of all income levels eat better."

Go to WafflesAndMochi.org for more information on the program, recipes, at-home activities and how you can help those experiencing hunger.