Turkey is a tricky bird. It takes ages to cook, can be difficult to carve, and often still ends up dry — no matter how hard you try. It's no wonder that sides are way more popular at the Thanksgiving table.

So to give you a little help for the upcoming holiday, we called on some of our favorite Michelin-starred chefs to find out how they make their turkey a standout every year.

From roasting your bird upside down to a game-changing gravy tip, these hacks are sure to turn you into a turkey fan again.

All the Michelin-star chefs we spoke to agree that brining your turkey is essential. 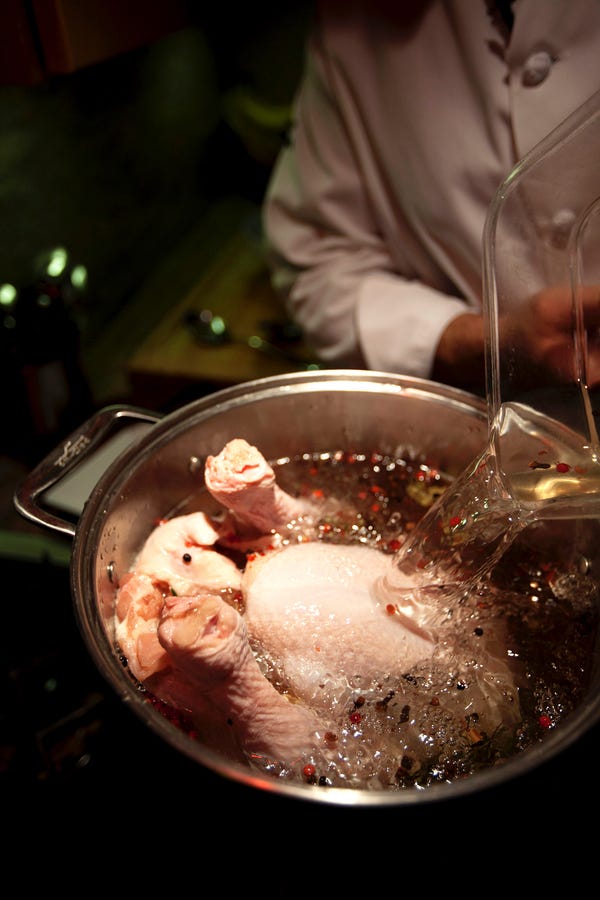 Brining your turkey, which means to treat your meat with salt or a salty water mixture, can add seasoning to the meat, plus break down proteins to make it more tender and juicy.

"Do not underestimate the power of brining poultry," Mari Katsumura, the executive chef and pastry chef at Yūgen in Chicago, told Insider. "For a nice and juicy interior, I recommend brining for a minimum of 12 hours before baking, frying, pan-roasting — whatever method you choose."

Val Cantu, of Californios in San Francisco, likes to brine his turkey for up to 24 hours, while Chris Morgan, of Bammy's in Washington, DC, brines his bird for a whopping 48 hours.

Beverly Kim, who runs Parachute in Chicago, told Insider that she adds extra seasonings to her brine.

"I add salt, soy sauce, citrus, some herbs, water, and a little bit of wine," she said. "I just throw all the things I like to eat in there and then I put the turkey in a garbage bag."

A spatchcock turkey won't look traditional on the dinner table, but it can add tons of flavor — and be a major time-saver. 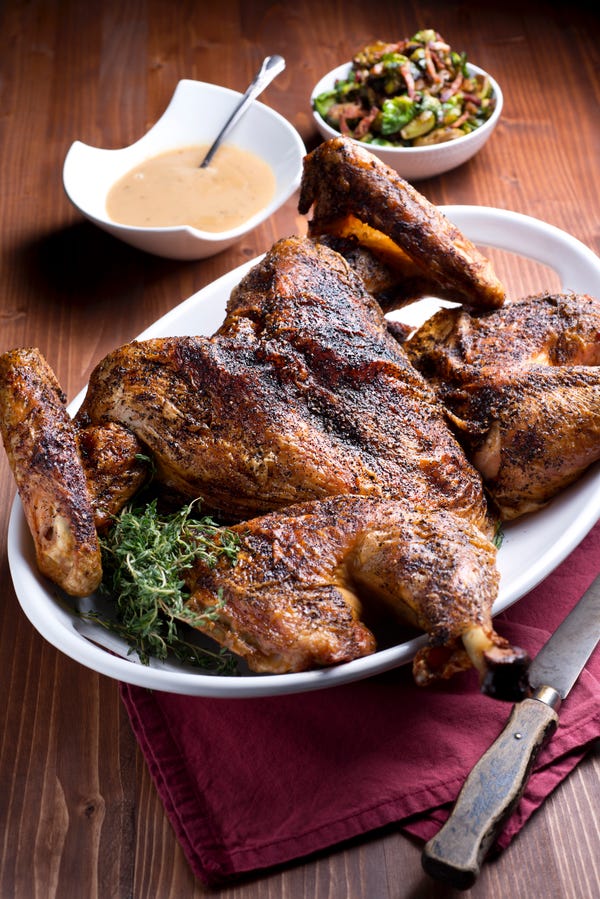 "I spatchcock my turkey, which means you remove the spine," Morgan told Insider. "When you spatchcock your turkey, it allows the bird to lie flat and it allows you to cook the turkey at a lower temperature. I like to go low and slow."

Morgan will save the spine for his stock and then — after brining his turkey — he'll put the bird in a big roasting pan and place a tightly-woven cloth over it for the first two to four hours.

"I'll create a stock and add aromatics that I'm basting the turkey with throughout," he added. "Then I remove the cloth and turn the oven up to get the skin really crispy in the end. I've found that to work really well."

Andrew Zimmerman, the executive chef of Sepia in Chicago, is also a big believer in spatchcocking his turkey.

Zimmerman also removes the legs and thighs, which he cures with salt, sugar, rosemary, thyme, and garlic before slowly cooking them in duck fat.

"This hack is going to sound like a lot of work, but it pays dividends in the end," he said. "And you can do it a day or two in advance."

Zimmerman brines and roasts the turkey breast separately, and reheats his thighs and legs in the oven — putting them skin side down on the roasting pan to "brown up the skin."

Or throw out tradition completely and deep-fry your Thanksgiving turkey. 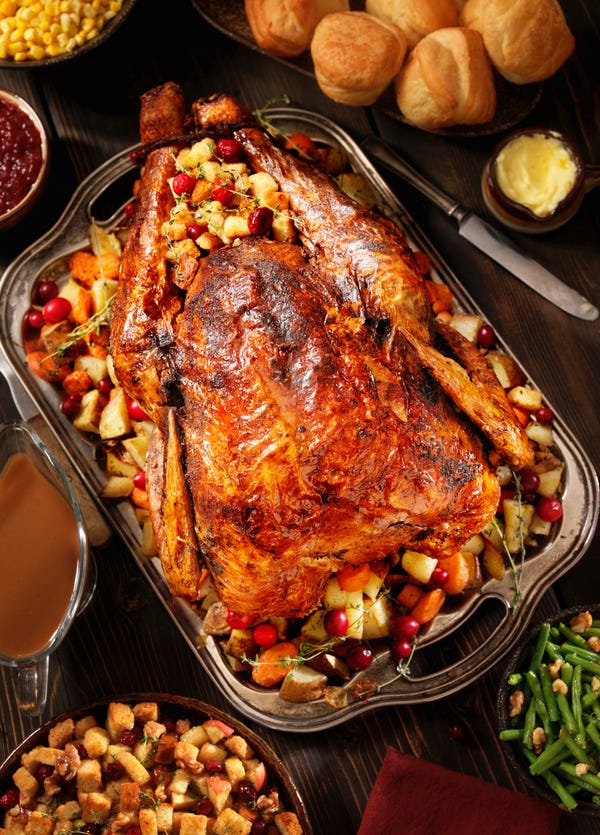 Curtis Stone, who runs Maude and Gwen in Los Angeles, told Insider that he became a convert after deep-frying his turkey last year.

"Turkey can dry out depending on how you cook it," he said. "When you fry turkey, it stays super moist and the skin is ridiculously crisp. And it's much faster than roasting."

First air dry your turkey for a couple of days in the fridge before you cook it to get nice, crispy skin.

Stone then recommends frying your turkey at a relatively low temperature (which will depend on the size of the bird), and leaving it in the oil for 35 minutes or so. You can buy a dedicated turkey frying pot online for under $50, and many experts recommend that you do it outside for safety reasons.

If you've got the equipment, putting your bird into the smoker is another way to switch up your classic Thanksgiving turkey. 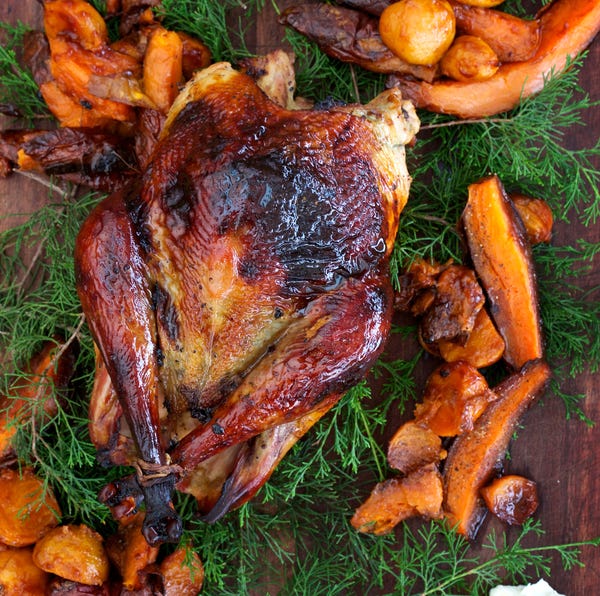 "I'll pretty much smoke the turkey every year," Cantu told Insider. "I think it makes for the most beautifully golden turkey."

If you decide that smoking your turkey is the way to go, Cantu recommends keeping the temperature low — around 225 to 250 degrees Fahrenheit.

"Make sure to pull the turkey out whenever the dark meat is at 160 degrees," he added. "I think going much further is too far."

Cantu also recommends letting the turkey rest for at least half an hour to 45 minutes before you carve it.

"If you carve it straight out of the smoker, you're gonna get a loss of liquid and it's not gonna be as delicious and juicy as it could be," he said. "Resting is paramount, especially if you overcook the turkey. It allows it to calm down and let the juices distribute through the meat."

If you do decide to roast your turkey in the oven, try cooking it upside down. 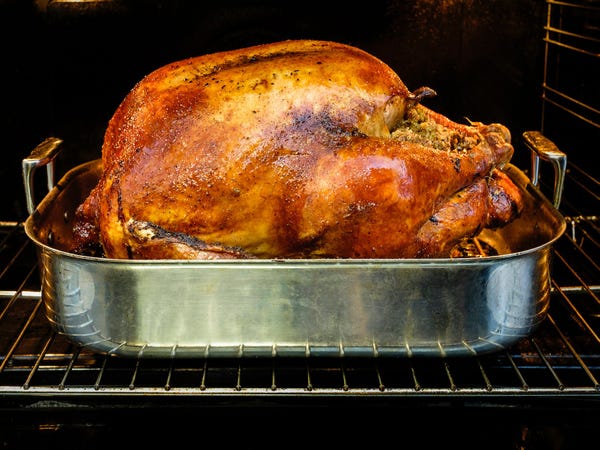 Kim accidentally discovered this hack years ago when she was cooking the Thanksgiving turkey at her sister's house.

"I accidentally roasted it upside down and I realized it 75% of the way through," she told Insider. "I flipped it over and finished it off with some high heat to get the skin colored and crispy, and it was the most moist Thanksgiving turkey I've ever had!"

By roasting the bird upside down, Kim realized that all the juices had gone to the turkey breast.

"So, during that last 25% of cooking at the end, it stayed moist instead of drying out — which is what I hate the most about turkey," Kim said. "So it was a mistake, but it turned out to be a wonderful thing!"

Kim recommends roasting the turkey upside down for at least half of the cooking time to allow "the brine and juices to sink all the way into the breast."

Even the carving stage can change how good your turkey tastes. 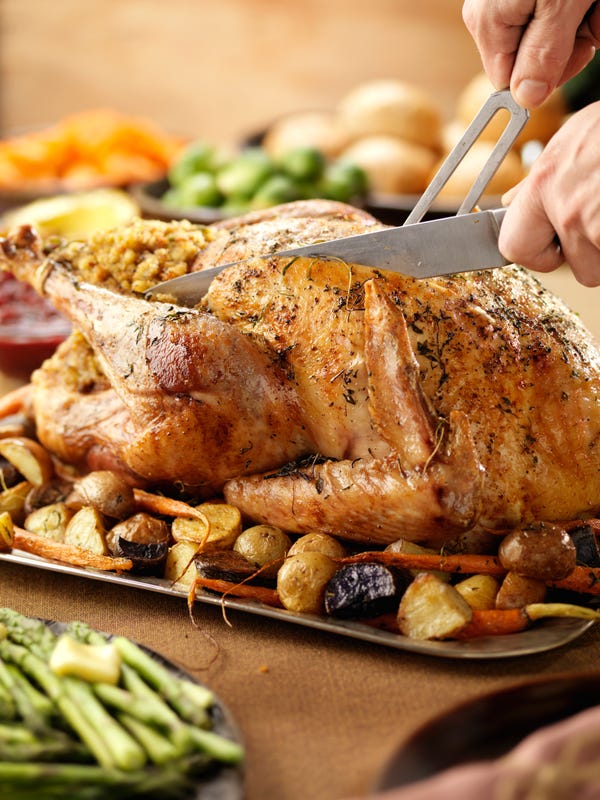 "When you're carving the bird, don't slice the breast on the bird," Dan Kleinhandler, who recently launched Sugar, Butter, Chocolate, told Insider. "Cut along the wishbone and then underneath the breast, so you can remove the whole breast in one shot. Carve that separately as opposed to cutting it on the bird."

By carving your turkey this way, Kleinhandler said every slice of breast will have some of the skin, which "is always the best part."

And you can't go wrong with a little extra butter.

"I always carve the turkey," Joe Flamm, a "Top Chef" winner, told Insider. "Melt yourself half a pound of butter and have some sea salt. Brush it with some butter to up the moisture, sprinkle a bit of salt on it, and it just makes the turkey a little nicer."

And never forget the power of a delicious gravy. 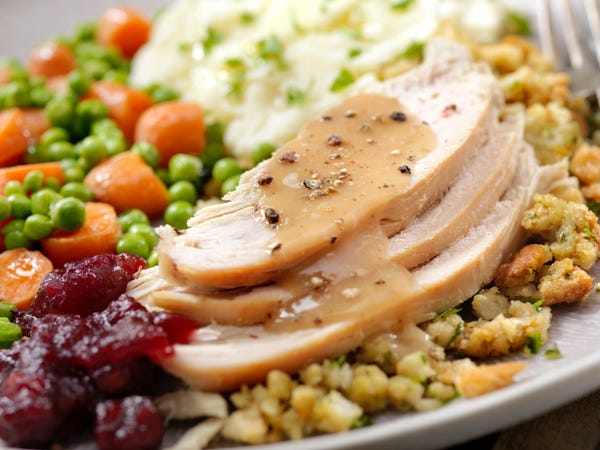 "I use as much of the drippings and extra fat as possible, and adding extra butter doesn't hurt," he told Insider. "The roasting juices from the bird are the most important part to making it taste like a traditional Thanksgiving gravy."

Zimmerman buys an extra package of turkey wings to help make his homemade stock — along with the backbone from his spatchcock turkey.

"You'll be able to make even more turkey stock," he said. "And no one ever complained about having too much gravy on Thanksgiving."