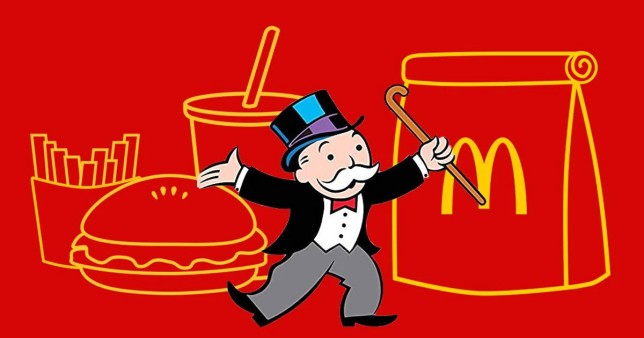 McDonald’s Monopoly is… finally back for 2022!

Yep, if you like to treat yourself to a Big Mac or McPlant meal every now and then, you’ll soon notice those little colourful stickers (aka game pieces) returning to the packaging.

Even those who wouldn’t typically be tempted by a Maccy D’s may have their head turned by the possibility of a free McFlurry or Apple Pie.

But when exactly is the popular annual game coming back? And if you’ve never played before, how does it all work?

Here’s all you need to know.

When is McDonald’s Monopoly back in 2022?

the promotion has bene a fast food fan favourite since it first began in 2005.

No end date for the game has been revealed just yet, though the 2021 game lasted around seven weeks (from August 25 to October 5) – after a two year pause due to Covid – so fast foo fans can probably expect a similar timeframe.

How to play the McDonald’s Monopoly game

The exact rules for 2022’s McDonald’s Monopoly haven’t been shared yet.

Typically, McDonald’s customers will get a number of game pieces with certain purchases.

Each game piece peels off, and reveals either an instant win prize (usually something like free fries, a free cheeseburger or a free McFlurry) – or a street you’ll recognise from Monopoly.

If you manage to collect a full street throughout the game, tracking them on the official game board, you’ll be able to win a much bigger prize. Think electronics, perhaps a holiday, a car or even a big cash prize.

Usually, the streets at the start of the Monopoly board (brown, pale blue, pink) tally up to equal less valuable prizes – of which there are generally a few up for grabs.

Many who play are really aiming to find both dark blue streets, Mayfair and Park Lane, to win the top prize, which in 2021 was £100,000 each for four lucky winners.

For now, 2022’s exact prizes have yet to be announced – so watch this space.

We do know there’ll be more chances to win this year, though, as each game piece is ‘Double Peel’ – meaning that if you scan it on the McDonald’s app, you’ll be given another chance to win something.

You’ll be able to keep track of your game pieces via the app, too.

Keep your eyes peeled for more details on the McDonald’s Monopoly promotion as we move closer to the September 7 launch date.