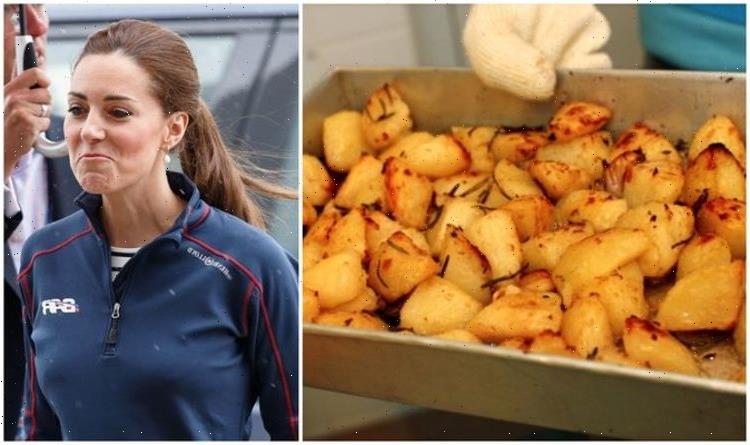 Royal living may look easy for Kate Middleton, but being a Duchess has many peculiar restrictions. The Duchess of Cambridge has been praised by royal fans for her poise and decorum, and for always acting like a perfect Princess. Kate’s beautiful fashion and down-to-earth personality have set her up to succeed as a future Queen consort.

Being Kate Middleton certainly has its perks, but the Duchess is also restricted by a long list of royal rules that she must follow.

While Meghan Markle made claims she struggled with the restrictions of the Royal Family, Kate has taken them in her stride.

From selfie bans to bedtime etiquette, there are many bizarre orders Kate must follow.

Kate Middleton is not allowed to eat potatoes, according to former royal chef Darren McGrady.

McGrady worked at Buckingham Palace as a royal chef from 1982 to 1993, and he told The Telegraph: “No potatoes, rice or pasta for dinner.”

According to the royal chef, the Queen is not a fan of carbohydrates, so they are never present at the dinner table for any members of the Royal Family, which would include the Duchess of Cambridge.

However, other reports have shown she is a fan of pasta, even making homemade pasta to celebrate Princess Charlotte’s fifth birthday in 2020.

Shellfish could give the royals food poisoning, and therefore Kate Middleton would also be banned from consuming this.

Royal fans are also not allowed to touch the royals. Slinging a hand around the Duchess’ shoulder could land you and Kate in trouble.

Casual touches by strangers are a big taboo to senior members of the Royal Family.

The Duchess of Cambridge also cannot go to bed before the Queen.

Kate and her fellow royals must not go to bed before Her Majesty.

In his book ‘The Royals in Australia’, former private secretary to the Queen, Sir William Heseltine, said: “Nobody felt it right to go to bed before the Queen did.

“For Diana the long royal evenings were agony. She’d excuse herself and go to bed, which was thought to be rather bad form.”

Selfies are not allowed to be taken with any member of the Royal Family.

You will not find a single selfie on Kate’s Instagram account she shares with her husband, Prince William.

Royal commentator Victoria Arbiter told Insider: “Royals would always rather have a personal interaction than have people clamouring for selfies.”

Kate is not supposed to sign autographs, for fear of her signature being forged.

And she must accept all gifts graciously, but the Queen decides which gifts should be kept and where they should be placed.

10/07/2021 Food & Drink Comments Off on Kate Middleton is banned from eating potatoes – ‘No potatoes, rice or pasta for dinner’
Recent Posts