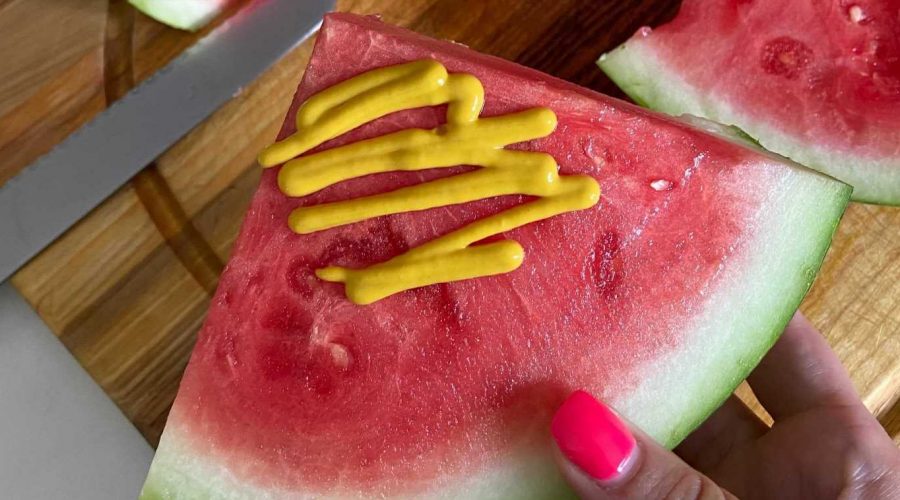 Another day, another random food trend taking over the depths of the internet. This time, that trend involves watermelon and mustard, so it’s safe to say we’ve all officially lost our marbles. It all went down on TikTok as some of the best chaos does and even Lizzo went ahead and tried it out so, of course, I had to try it too. I’d follow Lizzo into the dark after all.

Lizzo went ahead and duetted a video from TikTok user @yayayayummy and tried the trend out for herself. “Welcome to is it bussin’ or is it disgusting?” she said in the clip. Although @yayayayummy said that using French’s yellow mustard was the key to the combo, Lizzo used a Heinz yellow mustard instead. After she took a bite she looked perplexed and went in for a second bite, although she never gave an official verdict on the taste. This is why it was up to me to find out for myself.

Lucky for you, dear reader, I had a huge watermelon on my counter waiting to be cut into and a big bottle of French’s yellow mustard in my fridge for the upcoming grilling season. I did the dang thing: smothered a watermelon slice with the mustard and bit into it.

I hate to tell you this, but…I kind of liked it. It tasted really good in the weirdest of ways. The vinegar from the mustard mixed with the sweet, juicy watermelon counterbalanced each other which I wasn’t expecting. During the summer, my family makes this vibrant watermelon salad with herbs, red onion, and tons of vinegar, so it reminded me of a quick hack to accomplish that same taste.

My final thoughts are that watermelon and mustard make a surprisingly good duo. I wouldn’t necessarily go out of my way to grab a bottle of mustard to pair with my melon all the time, but if they’re next to each other on my next barbecue spread…why not?