As any true Bachelorette fan will tell you, the key to surviving an evening of awkward group dates and dramatic rose ceremonies is a really good snack. For me, that snack (or meal, depending on how much I want to commit) is pizza. But there are only so many times I can order the same greasy, extra-cheesy pie before needing to switch it up — especially since I recently decided to try a meat-free diet. That’s why, when (newly former) Bachelorette Clare Crawley recommended meatless, dairy-free pizza on her Instagram story, I was eager to try it out.

Clare is famous for her unapologetic Bachelor Nation clapbacks (see: Juan Pablo Galavis and Yosef Aborady), but if you’ve been following her on Instagram, you know she’s also a self-described health enthusiast. One peek at her IG highlights (where she has sections for both "heath" and "food") shows she’s into fitness, eating lots of fruits and veggies, and living dairy-free.

When Clare posted an IG story recommending Daiya’s dairy-free, meatless pepperoni pizza on Sept. 16, just a few weeks before her Bachelorette debut, I was a regular meat-eater. However, by the time The Bachelorette premiered on Oct. 13, I was on Day 22 of trying to be vegetarian, and I realized her recommendation could fit perfectly into my new lifestyle. So, heeding her advice, I got a few boxes of the frozen pizza to see how it stacks up against my usual delivery fave. 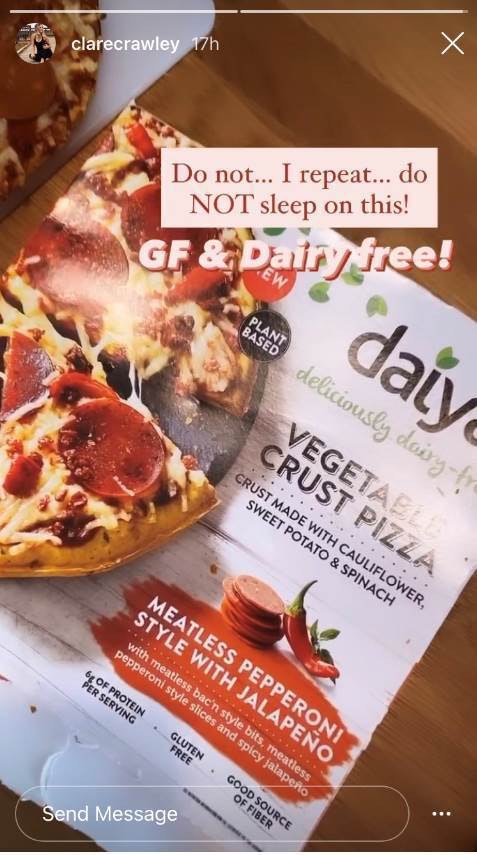 The exact variety of Daiya pizza Clare was raving about (her exact words were, "do NOT sleep on this") is the "Meatless Pepperoni Style with Jalapeño." Its gluten-free crust is made with cauliflower, sweet potatoes, and spinach. The pie itself is topped with meatless bacon-inspired bits, meatless pepperoni, jalapeños, and plant-based, mozzarella-style "cheese." 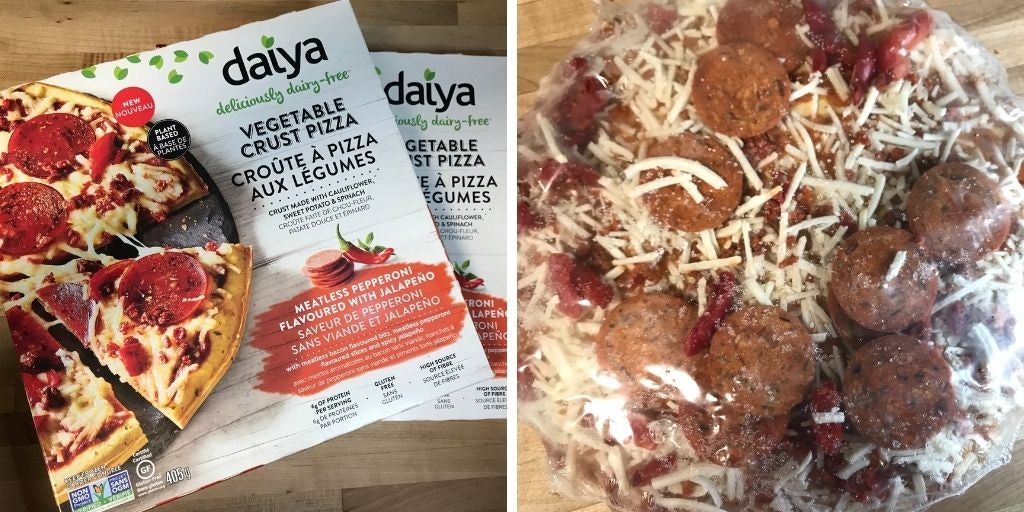 While I’ve long been a fan of cauliflower crust pizza, I usually just buy the pre-made crusts and add my own toppings, since that tends to be cheaper than buying pre-made cauli-pies. One pizza runs about $7, which is less than a delivery pie but more expensive than some other frozen options out there. 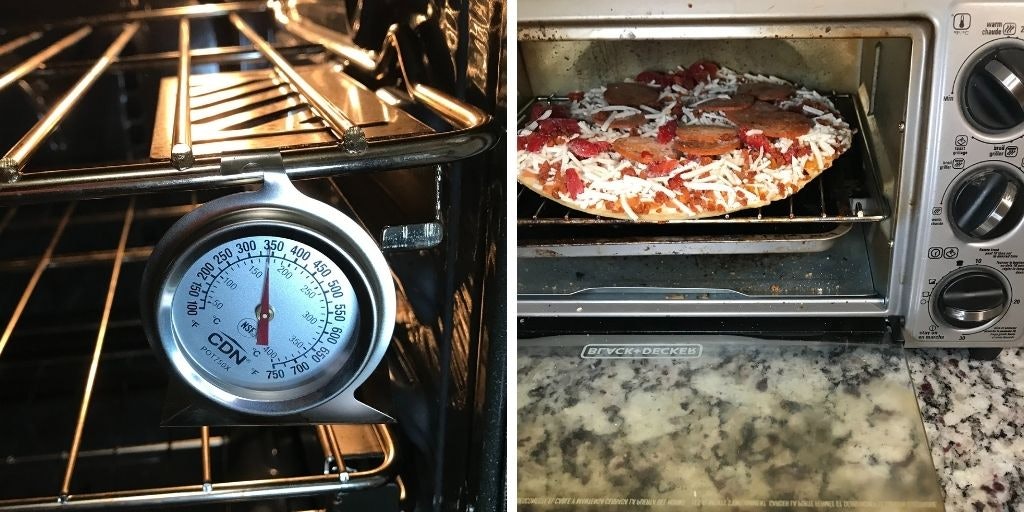 When it came time to make the pizza, I quickly realized there was a problem: Despite this being its *one* job, my oven isn’t the best at actually getting hot. I set the temperature to the recommended 425 degrees, and after 30 minutes, it was still at a measly 350 degrees.

Luckily, I have an old toaster oven left over from my husband’s college days still taking up space on our counter, and I was ecstatic to discover it was big enough for the pizza. While I had to cook it a little longer than the box said (20 minutes rather than the suggested 13), by the time it was done, the crust looked crispy and the smell of fresh pizza wafted enticingly through the house. 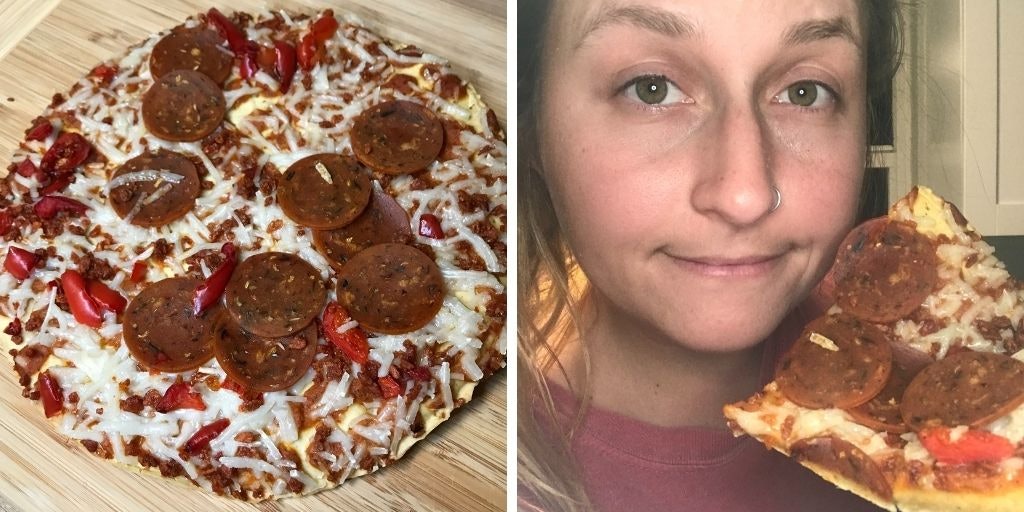 Before digging in, I let the pizza cool for a few minutes before cutting it into four large slices. While the suggested serving size is a third of the pizza, the whole thing is only slightly larger than a standard personal pie. I could have easily eaten the whole thing, but I agreed to split it with my hubs.

We both chowed down on our slices, amazed at how authentic the pepperoni tasted and how delicious the non-dairy cheese was. The touch of jalapeño added a nice kick (think medium-level salsa hotness) and the meatless bacon crumbles were a welcome addition (especially since I gave up pork a year ago). After a few bites, we pulled out a bottle of ranch dressing from the fridge to dip it in. While this wasn’t a step Clare mentioned, I have a feeling she’d tell me to follow my heart and dip freely. 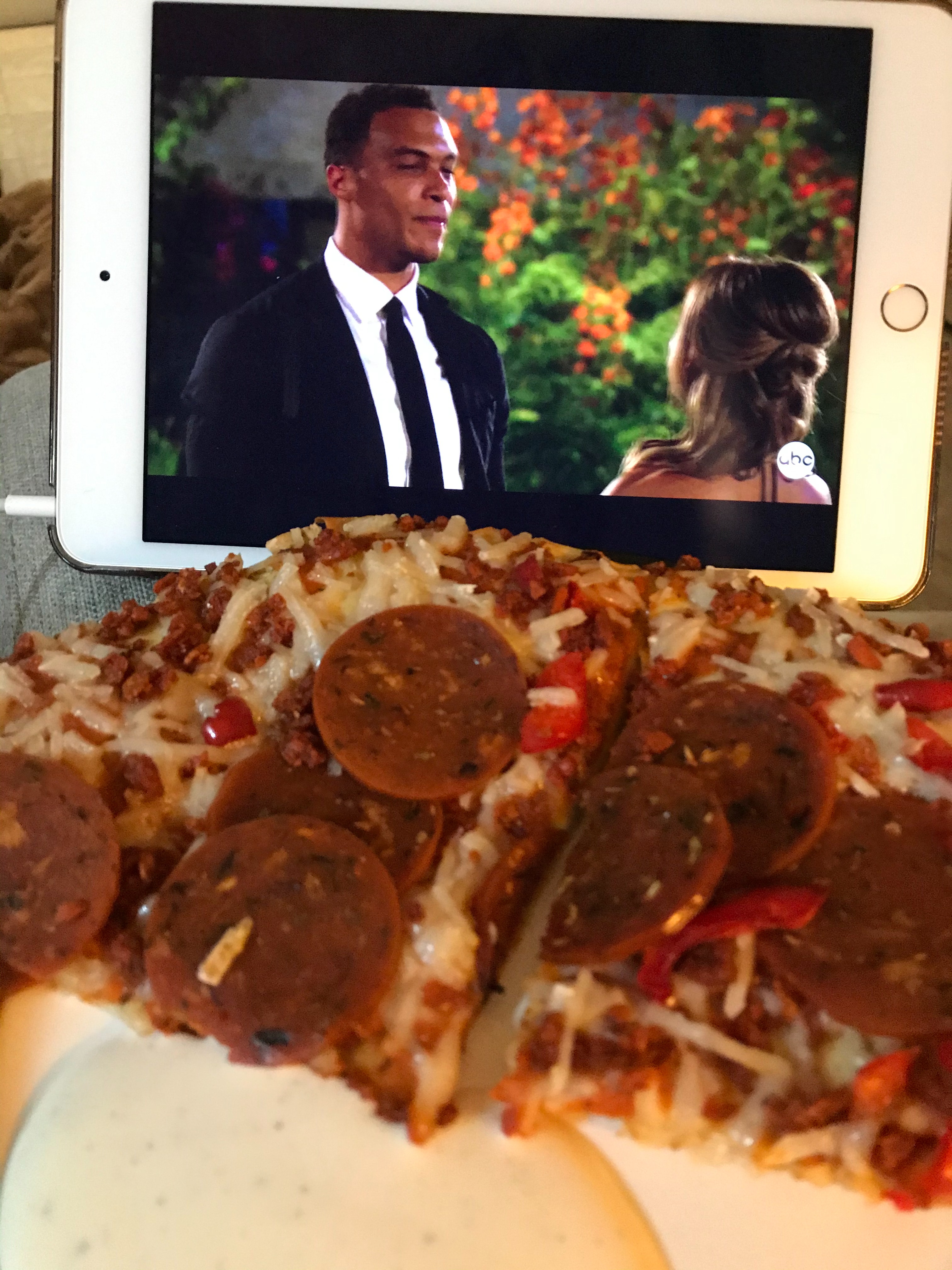 After devouring the pizza in record time (and immediately heating up and splitting another one), it was obvious: This pizza is a game-changer. Not only did it satisfy this newbie vegetarian’s meat cravings, but also, it didn’t leave me feeling like I ingested a bucket of grease like a normal, cheesy, delivery pizza would. Plus, since it’s free of dairy, egg, gluten, soy, fish, peanut, and shellfish, it’s a great option to serve to almost any friend with dietary restrictions.

All in all, I’m so thankful to Clare for sharing this pizza with the world. Now that I have the cooking method down, this will be my go-to snack for Bachelorette nights. It’s one way to remember Clare’s short — but eventful — time on the show.

In Elite Daily’s I Tried series, we put celebrities’ favorite products, recipes, and routines to the test to show you what living like your fave star is really like. Read more here.

11/12/2020 Food & Drink Comments Off on I Tried Meatless, Dairy-Free Pizza Like Clare Crawley & It’s My New ‘Bachelorette’ Snack
Recent Posts
We and our partners use cookies on this site to improve our service, perform analytics, personalize advertising, measure advertising performance, and remember website preferences.Ok