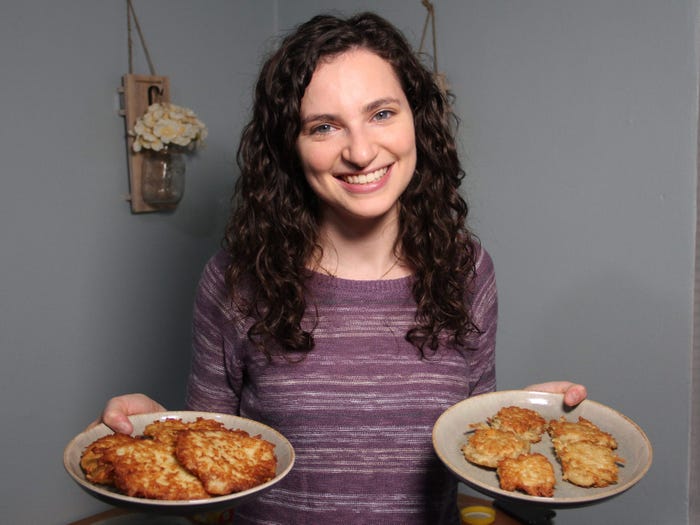 The Jewish holiday of Hanukkah, also known as the Festival of Lights, celebrates stories of a mighty few overcoming the odds.

The holiday commemorates the victory of a small group of Jewish rebels over an enormous Greek army to defend their heritage, and a miraculous amount of oil that burned in their reclaimed Temple's menorah (candelabra) for eight nights instead of one.

This year, Hanukkah begins on the evening of December 10, 2020. Jewish people remember the rebels' victory and the miracle of the long-lasting oil by lighting a menorah for eight nights and eating fried foods.

As someone who has grown up celebrating Hanukkah, I've eaten my fair share of latkes, and was curious to see how two of my favorite celebrity chefs have made the fried potato pancakes their own. I tried both Ina Garten and Martha Stewart's latke recipes to see which one would reign supreme.

Ina Garten and Martha Stewart are both known for their delicious recipes. But whose latkes would prevail? 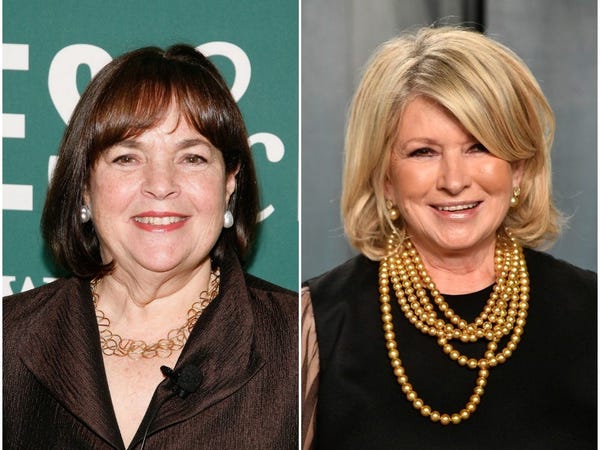 I began with Ina Garten's recipe. 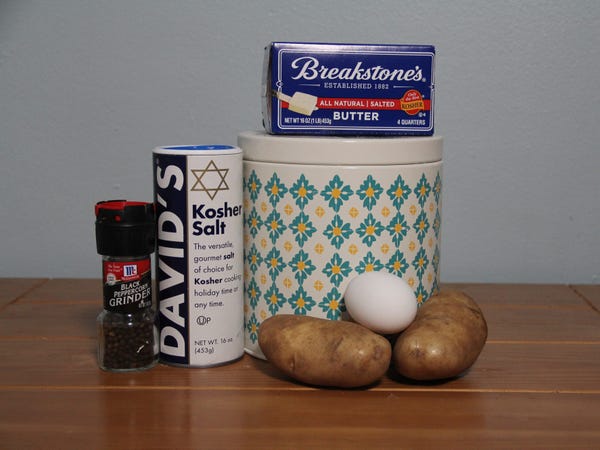 The ingredients were relatively simple — potatoes, an egg, flour, salt, and pepper. But I was surprised to find that the recipe called for frying the latkes in clarified butter instead of oil. Eating foods fried in oil is part of Hanukkah tradition, so I was a bit skeptical about this change.

I began by peeling and grating the potatoes, then squeezing out the excess liquid. 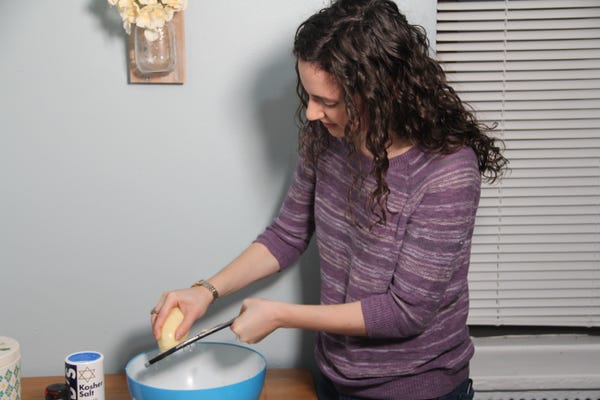 I managed to cut myself almost immediately. Grate with caution.

I mixed in the egg, flour, salt, and pepper. 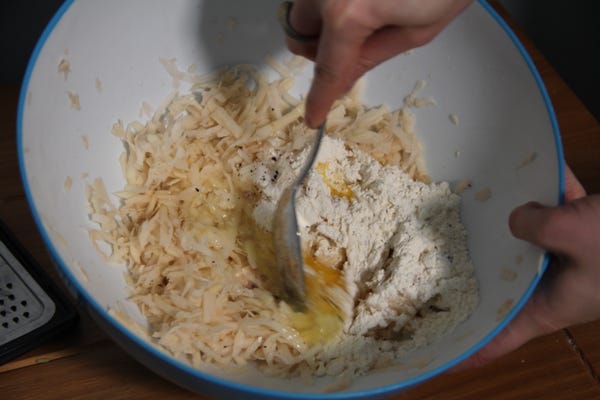 The resulting batter had the consistency of oatmeal.

I then started on the clarified butter for frying. 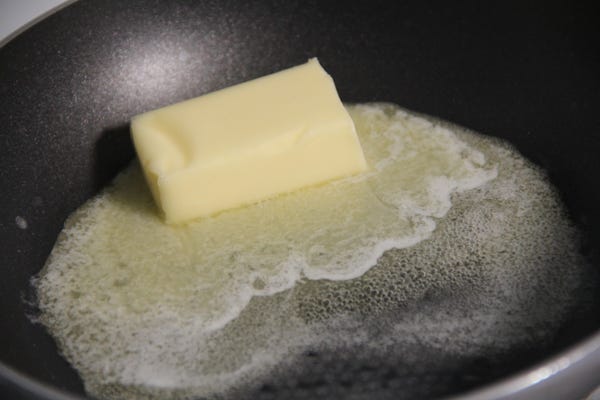 The recipe includes instructions for how to make clarified butter. You can also just buy ghee at a grocery store and skip this step.

Making clarified butter involves melting butter, waiting for milk solids to settle, and skimming them off the top. 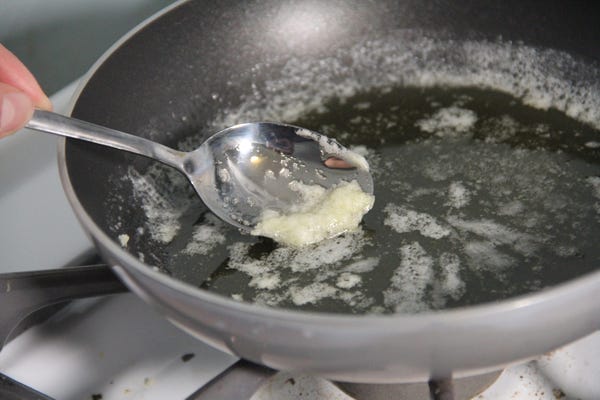 It reminded me of skimming the fat off the top of chicken soup. It was easy, but took extra time waiting for the solids to settle.

With the butter all clarified, it was time to fry. 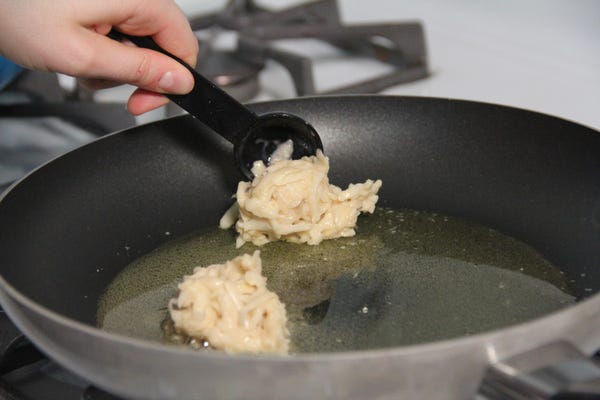 Garten's recipe instructs using a tablespoon of the potato mixture for each latke.

The small pancakes finished cooking in minutes, and they were easy to flip. 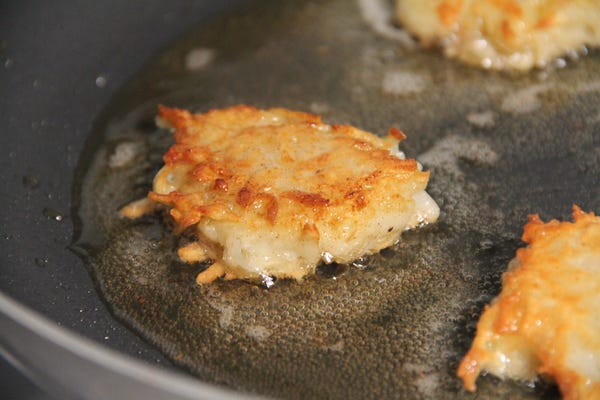 I also loved that frying the latkes in butter didn't make my entire apartment and person smell like oil. It's a strong scent that tends to linger. These just smelled mildly like melted butter, which was amazing.

The finished products came out perfectly crispy even though they weren't fried in oil. 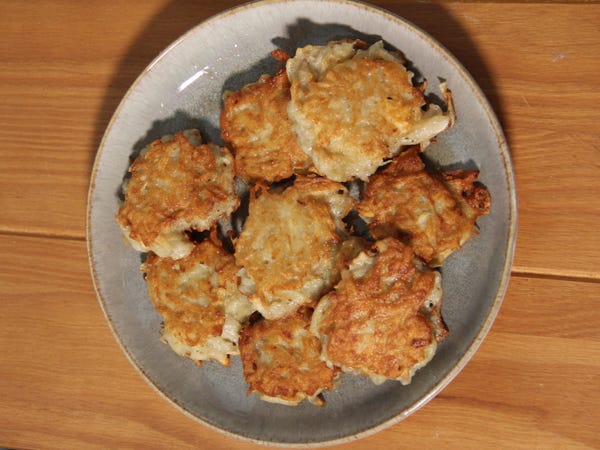 Because there weren't any other added ingredients to the batter, the potato flavor shone through and the buttery crust was delicious.

Paired with some applesauce — my latke topping of choice — Garten's recipe became the one to beat for me. 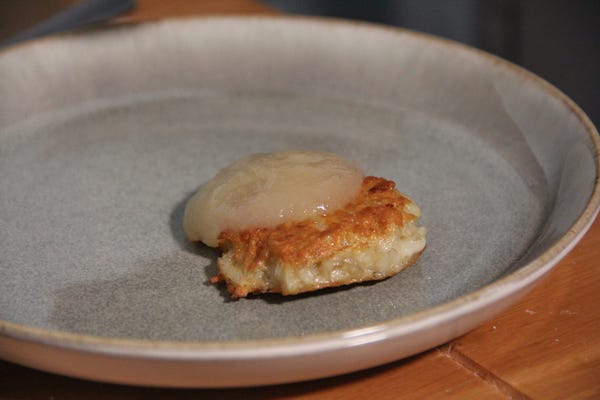 It didn't have the oily taste of a traditional latke, but I actually preferred the milder taste of butter.

Next, I started on Martha Stewart's latke recipe. 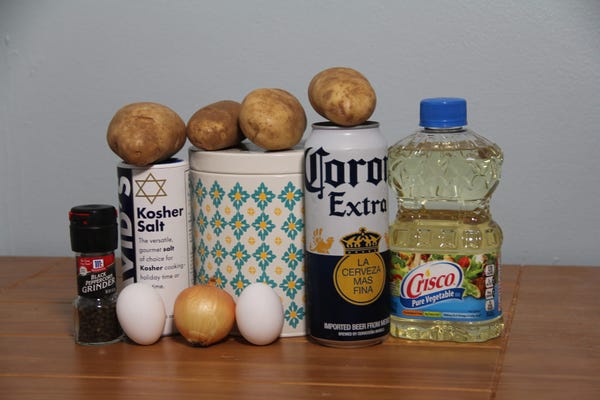 Stewart's recipe involved twice the amount of potatoes and eggs that were in Garten's, as well as additions like grated onion and beer.

I grated the potatoes, and squeezed them out with a kitchen towel. 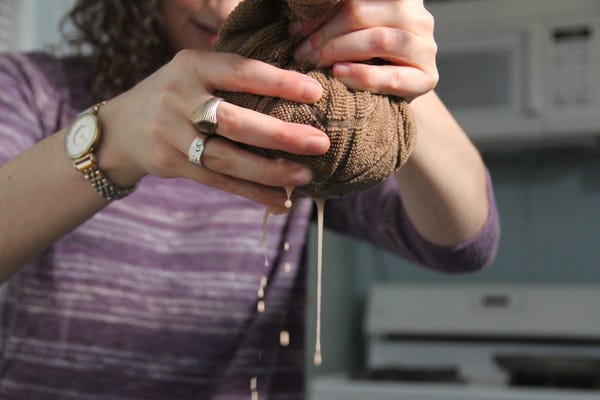 Stewart's recipe says to reserve this potato juice, let the milky starch sink to the bottom, and pour off the liquid — similar to the clarified butter I made for Garten's recipe.

I then added the eggs, a grated onion, and a quarter cup of beer. 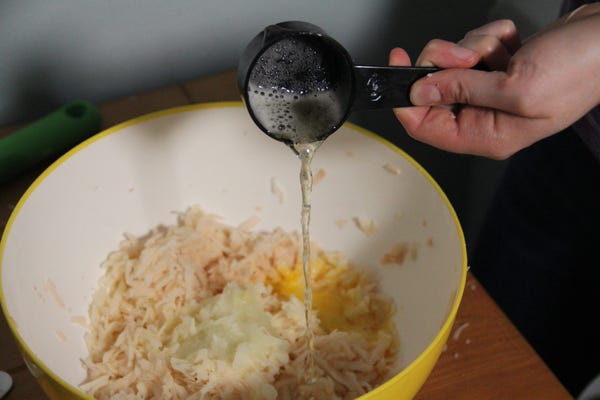 Grated onions are standard in latke recipes — beer, not as much. I was curious to see how it would affect the flavor and texture.

After mixing everything together, I scooped out half a cup of batter at a time into a pan of hot oil as the recipe instructed. 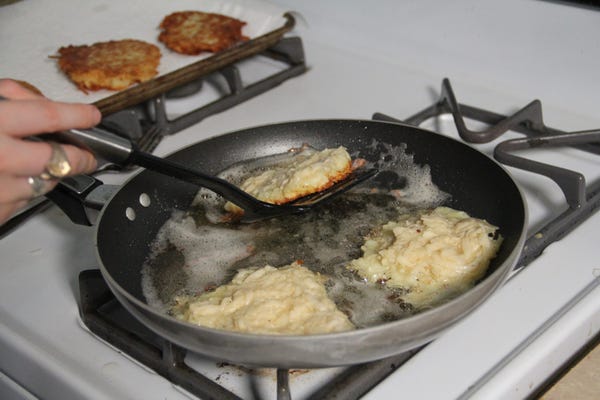 The larger latkes took much longer to fry than Garten's, and were a little more unruly to flip. I'm still trying to get a resulting oil splash out of my favorite jeans.

As that classic oily Hanukkah smell filled the kitchen, I became nostalgic for the latkes of my youth. 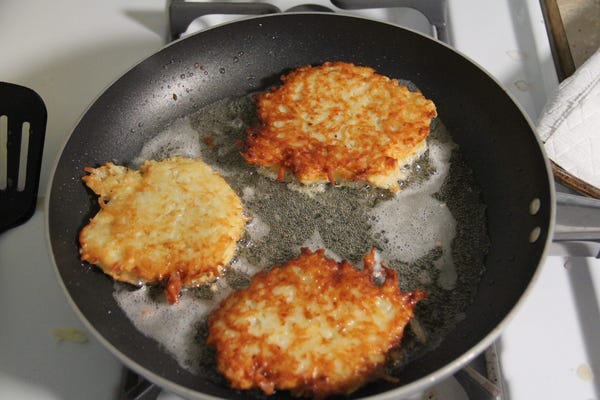 I could already tell that these latkes were going to be the more traditional of the two.

Stewart's recipe tasted like the kind of standard latke you can get at any Hanukkah party. 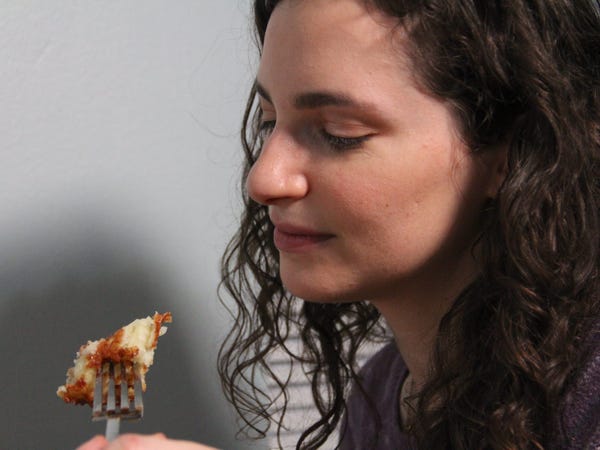 I couldn't taste the beer, but the grated onion and the crispy, oily goodness created a sharper flavor that screamed Hanukkah to me.

Personally, I preferred Garten's take on the potato pancake, but Stewart's recipe is great if you're looking for a classic latke. 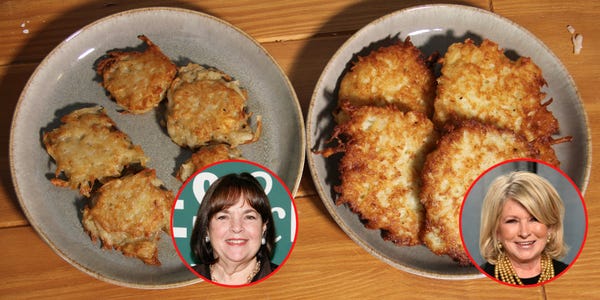 Even though they're not fried in oil — which is kind of the point of eating them on this holiday — I enjoyed Garten's latkes more because they were easier and faster to make, and they had a mild, buttery flavor that I loved. But Stewart's recipe is perfect for traditionalists.

12/02/2020 Food & Drink Comments Off on I tried Ina Garten and Martha Stewart’s latke recipes, and Garten’s buttery potato pancakes came out on top
Recent Posts
We and our partners use cookies on this site to improve our service, perform analytics, personalize advertising, measure advertising performance, and remember website preferences.Ok