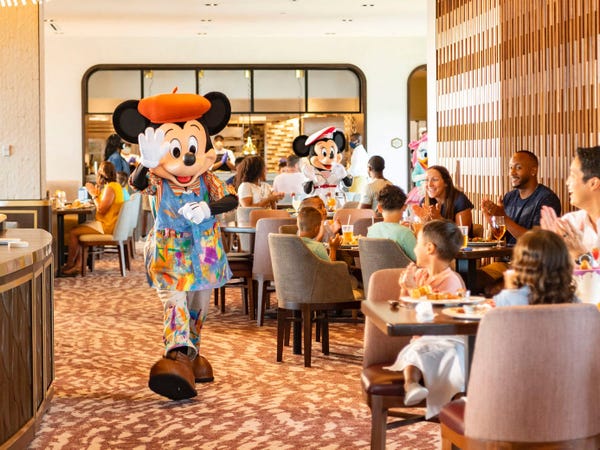 After months of closed dining rooms and shared recipes for some of Disney Parks' classic treats like the iconic Dole Whip, some fans thought the park was expanding its indoor dining capacity.

On Tuesday morning, several Walt Disney World news sites reported an increase in restaurant reservation availability through the My Disney Experience app. Reporters at WDW News Today and Inside the Magic shared screen grabs of their apps showing a slew of open reservations at popular restaurants like Chef Mickey's and Oga's Cantina.

The Phase 3 announcement gives autonomy to restaurants — which include sit-down dining establishments at Disney World — on what capacity level they want to operate at.

There has been no official announcement from Disney Parks regarding the expansion of reservation availability, but a park representative told Insider that reservations remain unavailable.

Inside the Magic reported this morning that a team member made the discovery of seemingly expanded reservations while attempting to change an upcoming booking. They said there were suddenly open tables at restaurants like Kona Cafe at Disney's Polynesian Village Resort, Topolino's Terrace at Disney's Riviera Resort, and the Whispering Canyon at Disney's Wilderness Lodge that weren't there the day before.

WDW News Today reported that their team was able to book day-of reservations at typically hard-to-get-into restaurants like Oga's Cantina and the iconic character breakfast at Chef Mickey's.

Though it seemed like reservations were open, the Disney representative told Insider that the rumors of expanded indoor dining capacity aren't true and that it was just a glitch.

For now, Disney fans looking to get their hands on some classic park dishes will have to keep their eyes out for recipes released by the park.

11/03/2020 Food & Drink Comments Off on Disney World restaurants appeared to suddenly increase their indoor dining capacity, but representatives say it was just a technical issue with online reservations
Recent Posts
We and our partners use cookies on this site to improve our service, perform analytics, personalize advertising, measure advertising performance, and remember website preferences.Ok