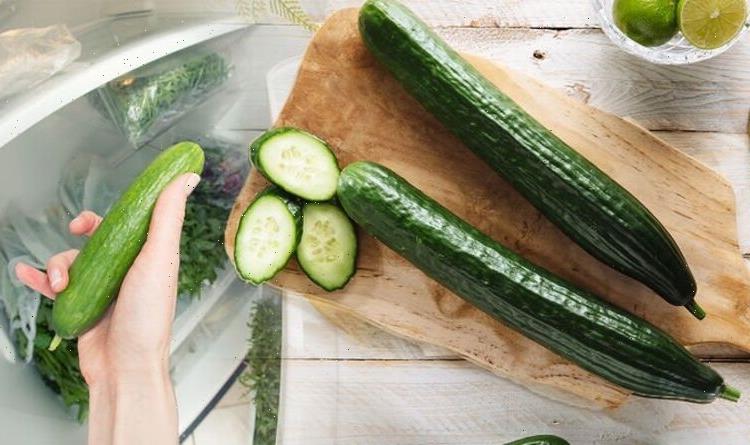 The idea of keeping your cucumber in the cupboard might not be the most appealing, summoning visions of a warm cucumber in your salad. However, according to scientists, this might actually be the perfect place to keep the food item.

According to the College of Agricultural and Environmental Sciences, if cucumbers are stored below 10 degrees Celsius for more than three days, they can get “cold injury”.

This can lead to wateriness, pitting and even faster decay.

Based on this theory, cucumbers will actually stay fresher for longer if we store them in the cupboard or maybe even the fruit bowl.

Of course, you should make sure the cucumber is in a shady spot and not left in direct sunlight all day either.

To make things even more interesting, botanically speaking, cucumbers are not vegetables.

According to The European Food Information Council (EUFIC), a cucumber is a fruit because of its seeds.

EUFIC states: “A botanist would use the botanical classification, which is based on the plant’s physiological characteristics, like the structure, function and organisation of the plant. Therefore, botanically speaking, a ‘fruit’ is the seed-bearing product that grows from the ovary of a flowering plant or, in other words, a fruit is the plants’ way of spreading its’ seeds.

“A botanical fruit would have at least one seed and grow from the flower of the plant.

“With this definition in mind, cucumbers are classified as fruit because they contain tiny seeds in the middle and grow from the flower of the cucumber plant.”

Cucumbers should also not be stored alongside some other fruits and vegetables.

According to the food website Delish: “Cucumbers are highly sensitive to ethylene, which is a natural gas that causes certain foods to ripen (and eventually spoil) very quickly.

“So be sure to keep them separately from bananas, tomatoes, and melons, which are all high ethylene producers.”

The cucumber revelation sparked a national outcry in 2020 after it was brought up on ITV’s This Morning.

The segment followed a viral graphic which outlined all of the fruits and vegetables people commonly store “wrong”.

According to the graphic, citrus fruits, such as lemons and limes, should be kept in the fridge to make them last longer.

Eggs, on the other hand, should be kept in the fridge, despite being sold on the shelf in supermarkets.

03/24/2022 Food & Drink Comments Off on Cucumber in the fridge? Why you’ve been storing cucumbers all wrong
Recent Posts