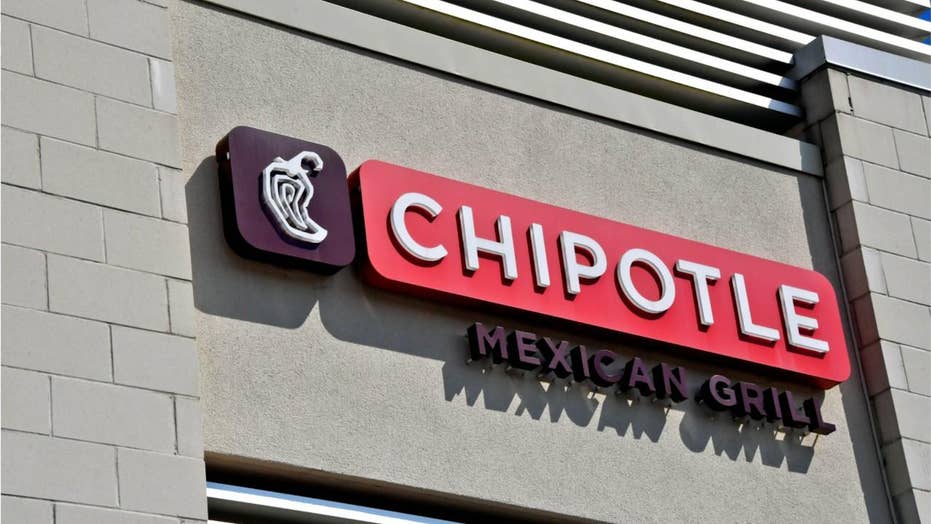 Chipotle fired a manager in St. Paul, Minnesota after he refused to serve five black customers over ‘dine and dash’ fears.

On Monday afternoon, Chipotle Chief Communications Officer Laurie Schalow told Fox News that the company has offered to rehire its terminated manager. The manager was fired last week for refusing to make food for five black customers unless they paid in advance, saying they had failed to pay at the restaurant before. Tweets later emerged showing that at least one member of the customers had boasted about stealing and "dining and dashing" from restaurants in the past — including Chipotle.

Schalow sent the following statement: "We have spent the last few days reviewing the evidence available to us regarding the incident in St. Paul, MN. Based on our review, we have offered our manager her job back. While our normal protocol was not followed serving these customers, we publicly apologize to our manager for being put in this position. We will work to continue to ensure that we support a respectful workplace for our employees and our customers alike.

Our policy is to treat our customers and employees fairly and with respect at all times and under any circumstances. We will work with all our restaurant teams to ensure they are prepared to handle situations of this kind and know they have our full support. We are committed to doing the right thing and acting in a manner consistent with a thoughtful, fact-driven approach."

The restaurant chain Chipotle announced Saturday that it had terminated one of its managers for suggesting in a viral video that five black customers were planning to order food without paying — but on Sunday, the company acknowledged to Fox News that it was considering re-hiring the manager because her suspicions may have been well-founded.

In a series of video clips seen more than 3 million times on Twitter, a Chipotle customer in St. Paul, Minn., identifed as 21-year-old Masud Ali, and several friends are told by a manager: "You gotta pay, because you’ve never had money when you come in here.” An employee adds, "We're not gonna make food unless you guys actually have money."

As Ali and his friends complain about "stereotypes," the videos show employees at the store claiming that the group had previously ordered food on two occasions without paying. The store manager also calls the police in the videos, which were recorded and uploaded by Ali.

In one video clip, the manager smiles and tries to ignore the men while they produce what appears to be cash, as proof that they can pay for their food. One of the employees visible in the kitchen is black.

"It sounded really racist — the way she said it was racist,” Ali told Minnesota's Star Tribune newspaper on Friday. “She asked for proof of income as if I’m getting a loan.” On Twitter, Ali asked Chipotle: "Can a group of young well-established African-American get a bite to eat after a long workout session?”

Ali also posted the restaurant's phone number and address to social media. Within hours and under a deluge of criticism, Chipotle issued a statement implying that the manager had acted out of bias and announcing her termination.

But on Sunday, as tweets emerged showing that Ali had apparently made a habit of stealing from restaurants, Chipotle walked back its decision.

"Our actions were based on the facts known to us immediately after the incident, including video footage, social media posts and conversations with the customer, manager, and our employees," Chipotle Chief Communications Officer Laurie Schalow told Fox News on Sunday. "We now have additional information which needs to be investigated further. We want to do the right thing, so after further investigation we will re-train and re-hire if the facts warrant it."

Despite reports on Twitter late Sunday that the manager had received her job back, Chipotle confirmed to Fox News that "nothing has changed from this morning. We are still investigating a few things."

"After further investigation we will re-train and re-hire if the facts warrant it."

In a previous statement on Saturday, the company had said: “We are committed to treating all of our customers fairly and with respect. … Regarding what happened at the St. Paul restaurant, the manager thought these gentlemen were the same customers from Tuesday night who weren’t able to pay for their meal. Regardless, this is not how we treat our customers and as a result, the manager has been terminated and the restaurant is being re-trained to ensure something like this doesn’t happen again.”

In subsequent interviews, though, Chipotle representatives admitted that the manager might have been right in claiming that individuals in the group had ordered food just days before without paying once their order was completed. (As a matter of policy, Chipotle only provides food to customers upon payment, but store employees finish making orders before payment is requested at the register.)

“We are not able to confirm that with 100 percent certainty,” Schalow acknowledged in a statement to The Twin Cities Pioneer Press. “We asked Masud if he was in our restaurant on Tuesday and he said no.”

And almost immediately, it emerged that Ali had apparently spoken favorably of "dining and dashing" — the practice of ordering food and not paying for it — several times on Twitter in the past.

"aye man i think chopotle catchin up to us fam. should we change locations and yoooooo what should we do about the other thang," read a since-deleted post on Ali's account from 2016. 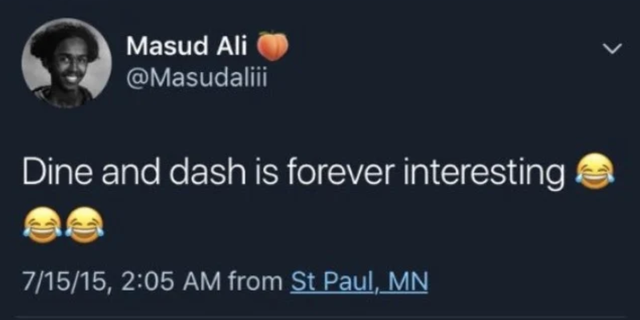 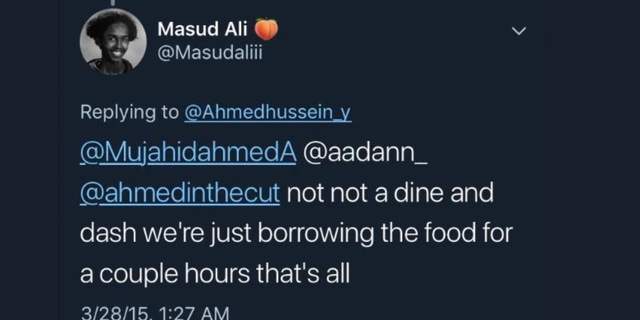 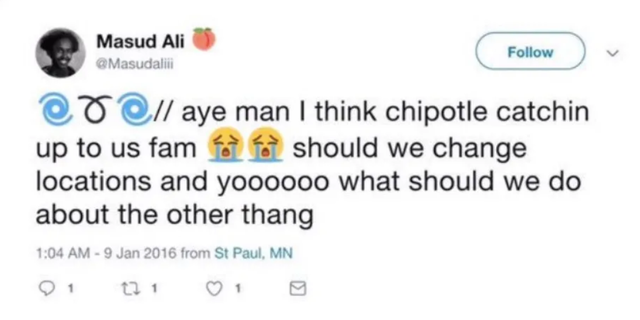 In 2015, he wrote that "we finna goto Applebees and eat as much as we can and tip the nice lady 20cents and walk the f— out."

When another Twitter user objected, he replied that "we're just borrowing the food for a couple hours" as opposed to dining and dashing.

Later that year, he opined that "Dine and dash is forever interesting" and discussed stealing Tabasco bottles from Chipotle.

Another post read:  “Guys we’re borrowing food… that’s it. And if the lady tries to stop you at the door don’t hesitate to truck the sh– out of that bi—.” Ali has since deleted all of these posts.

"We finna goto Applebees and eat as much as we can and tip the nice lady 20cents and walk the f— out."

As those tweets surfaced over the weekend, Chipotle's media representatives, including Schalow, initially said that they had seen the tweets and would stand by their decision to fire the manager — seemingly contradicting Schalow's statement to Fox News on Sunday.

According to author Matt Palumbo, Schalow had previously claimed that the store's manager was justifiably terminated because she broke protocol by requiring payment before making the customers' food, regardless of her suspicions about the customers' intention to pay.

Palumbo called Schalow's suggestion that Chipotle had not been aware of Ali's tweets when it fired the manager an "absolute lie." (For her part, Schalow has reportedly said that other information – and not simply Ali's tweets –was behind Chipotle's desire to reconsider the manager's fate.)

"The correct action to take would have been to make their food and not hand it over to them until they paid for it," Schalow had asserted as part of her justification for firing the manager, according to Palumbo.

Ali did not respond to Fox News' request for comment.

The episode follows several other high-profile incidents of alleged racism that have rocked the service industry. In May, Starbucks closed 8,000 of its stores for anti-bias training after two black men were arrested for trespassing in one of its Philadelphia shops. The store manager, who stopped working at Starbucks shortly after the episode, had called the police because the men remained seated in the shop without ordering anything, and refused to order something when asked.

Earlier this year, a fired Chipotle manager who was accused of stealing $626 ended up winning nearly $8 million from the company in a wrongful termination suit.