Yes, intermittent fasting could help you lose a significant amount of weight—but what if you only want to lose like, 10 pounds?

Your solution: tiny tweaks. “Small lifestyle changes can really add up and be pretty easy to implement—if you know where to begin,” says Amy Gorin, R.D.N., owner of Amy Gorin Nutrition in the New York City area. “They key is finding changes that seem very doable within your day-to-day routine. These can really add up to big weight-loss benefits if you keep up with them over time.”

So which of your daily habits should you start rehabbing first? Here’s how to lose 10 pounds the easy way. 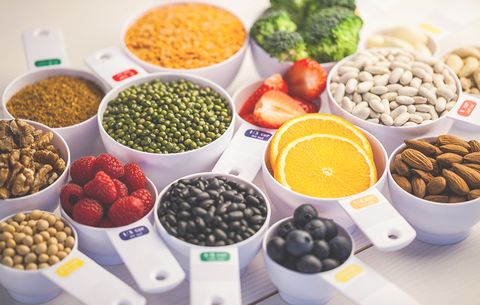 If your scale’s been holding steady at the same number for weeks, you might need to think about portion control. It’s easy to accidentally overindulge, so Gorin says learning to eyeball portions is key.

“I often recommend that clients measure foods at home for a couple of weeks, so they can get used to what serving sizes look like and can better judge,” she says. A tablespoon of olive oil, for example, should be about the size of a poker chip.

The good news is that you don’t have to measure veggies—as long as you’re steaming them or eating them mostly raw, they’re so low-cal you can load up your plate with them.

But your Greek yogurt is healthy, right?! Well, it was…until you loaded it up like an ice cream sundae. Gorin says healthy choices like Greek yogurt and oatmeal can quickly become high in sugar, fat, and calories if you’re not careful, so don’t overdo the mix-ins and toppings.

“Choose fresh fruit or dried fruit, but not both, and just one healthy fat add-in, like nuts or nut butter,” she recommends.

It might feel like you’ve been making all the right choices, but sneaky things could be adding to your calorie tally. To find out what they are, track your food intake for several days using an app like MyFitnessPal (or pen and paper, if you’re old school like that), and then analyze the results to see where the surplus cals might be hiding.

“Journaling your meals and snacks can keep you both mindful and honest about what you’re eating, and give you an opportunity to reflect about any places you can tweak your eating habits,” Gorin explains.

Kind of like your souped-up Greek yogurt, the ingredients added to many cocktails can make the calories and sugar in one drink skyrocket.

Gorin suggests choosing drinks mixed with a lot of low-cal flavor, like vodka or gin with club soda and lime, or cocktails featuring fresh herbs—like rosemary and thyme—in lieu of simple syrups.

And just FYI: five ounces of wine is about 120 to 130 calories, a vodka soda is about 80 calories per one ounce of vodka, and a typical light beer will come in at 100 calories per 12 fluid ounces.

Obviously the deep-fried tempura is off-limits, but some common toppings in sushi dishes can sabotage your small weight-loss goals, too (like spicy mayo-based sauces).

Instead, stick with veggie rolls, fresh fish sushi rolls or sashimi, salmon-avocado rolls, tuna-cucumber rolls, and yellowtail rolls. Gorin also suggests pairing your sushi order with a seaweed salad to add extra veggies to the meal, and opting for a pickled ginger topping because it’s low-cal and super-flavorful.

It might come as a surprise, but something as simple as lack of sleep might be contributing to your struggles.

“Getting enough shut-eye helps you make healthy decisions throughout the rest of the day—and have enough energy to cook healthy meals for yourself and make the time for exercise,” Gorin explains.

To help curb your appetite and drop those last remaining pounds, she recommends putting a calendar reminder in your phone for half an hour to an hour before you’d like to get to sleep so you have enough time to wind down. 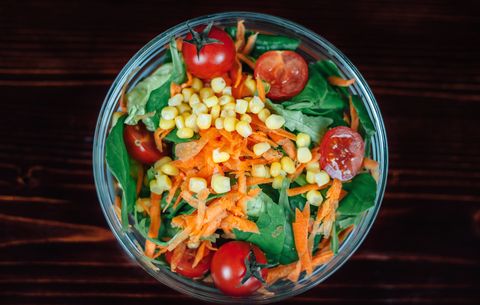 Gorin says that the oil in salad dressing helps you absorb the nutrients from the veggies, so it’s best not to cut it out completely. But you definitely want to avoid overdoing it on the portions, because those dressing calories add up quickly. Since a typical salad dressing serving size is two tablespoons, pouring out an additional two tablespoons on top of that can turn your modest 120-calorie serving into a whopping 240-calorie serving.

Measure your dressing out a few times until you learn what two tablespoons really looks like. If you find yourself consistently overpouring, put equal parts vinegar and oil in a spray bottle, shake, and then mist it over your greens instead.

If your dinner plate is full of meat and grains with a few lonely vegetables on the side, you’re setting yourself up for failure. Half your plate should be filled with veggies, says Gorin, with meat and grains each making up a quarter of the remaining real estate. Steaming, grilling, and sautéing vegetables in broth are all great ways to make veggies the star of the meal (and get tons of filling fiber).

Here’s the thing: Pretzels just disappear when you eat them; pistachios leave behind evidence of how many you’ve consumed in the form of the shell. That visual cue might help prevent mindless over-eating, says Gorin. (Tip: a good serving size of in-shell pistachios is about a quarter cup).

Gorin’s recommendation is backed by some science, too: in one study in the journal Appetite, people who ate in-shell pistachios ate 41 percent less calories than people who snacked on the shelled version.

Some of Gorin’s favorite recipe hacks for incorporating more pulses into your diet? Blending pureed white beans into a smoothie, adding black beans to a brownie recipe, tossing lentils into your meatballs, and using roasted chickpeas in lieu of croutons on a salad.