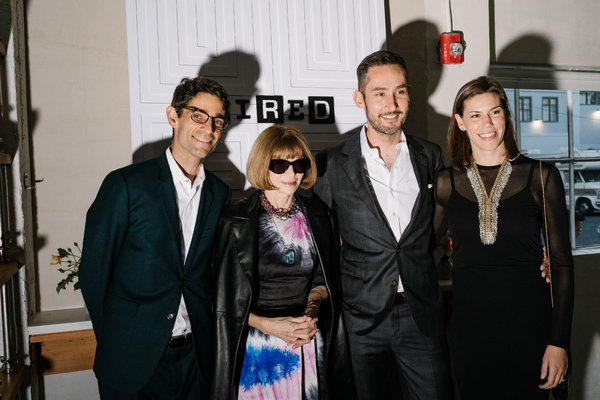 Ms. Williams is the global tennis superstar. Mr. Brand is the 79-year-old founder of the Whole Earth Catalog, the influential counterculture magazine published mostly between 1968 and 1971 that Steve Jobs once called “Google in paperback form.” For many guests, Mr. Brand was the bigger idol.

“Stewart certainly is the grandfather of what’s going on” in Silicon Valley, said Louis Rossetto, Wired’s co-founder and first editor. “They don’t even know who she is,” he added, half-jokingly, about Ms. Williams.

(Turns out, he wasn’t wrong. “Who is Serena Williams?” Mr. Brand later said when asked. “Yes, yes, the Williams sisters,” he said when reminded, the one married to Alexis Ohanian, the co-founder of Reddit.)

While partygoers in New York and Los Angeles are used to socializing with celebrities, the Wired dinner, at the Tartine Manufactory in the city’s Mission District, was quintessential Silicon Valley: about 75 computer scientists, tech entrepreneurs, biologists, astronomers, writers and thinkers.

“Status depends a lot on I.Q. in Silicon Valley,” said Nicholas Thompson, the lanky editor in chief of Wired and the party’s co-host.

Of course, there were a few New York types, too, causing some of the brainiacs to gawk. Several guests asked aloud why Anna Wintour, the Vogue editor and artistic director of Condé Nast (which owns Wired), wore sunglasses indoors. Ms. Wintour, the other co-host, spent much of the cocktail hour chatting with Kim Jones, the British fashion designer, and Jony Ive, the design chief of Apple.

How does a Silicon Valley party compare with one in New York? “Very relaxing,” Ms. Wintour said.

The three Wojcicki sisters seemed to be having more fun than anyone. Susan Wojcicki, who runs YouTube, and Anne Wojcicki, the chief executive of 23andMe, were joined by their lesser-known but similarly accomplished sister, Janet Wojcicki, an epidemiologist, medical anthropologist, professor and Fulbright scholar.

“There are five others,” Janet said, straight-faced. (She was kidding.)

For dinner, there were hunks of fresh bread, yogurt-marinated lamb and halibut. Mr. Brand sat next to Adam Savage, the host of “Mythbusters.” Ms. Williams sat between Ms. Wintour and Kevin Systrom, a founder of Instagram.

Mr. Rossetto and Jane Metcalfe founded Wired in 1993 to hold a mirror up to the powerful people who were shaping the nascent digital age. In those early days, many dot-commers were techno-utopians, convinced technology would save the world.

Nowadays, there is a backlash against the tech industry, a topic that came up frequently at the party. With intense scrutiny on tech’s role in shortening attention spans, amplifying divisions and spreading misinformation, many guests had a new name for themselves: techno-optimists.

“All of it can be solved,” said Sebastian Thrun, a founder of Google’s self-driving-car project, who wore a colorful, psychedelic button-down. It was important to take the long view, he said. “When you zoom out a little bit, we have running water, flushing toilets, electricity, planes.”

Nolan Bushnell, the entrepreneur best known for founding Atari and the Chuck E. Cheese chain, was more succinct: “A lot of stupid people are pessimists.”