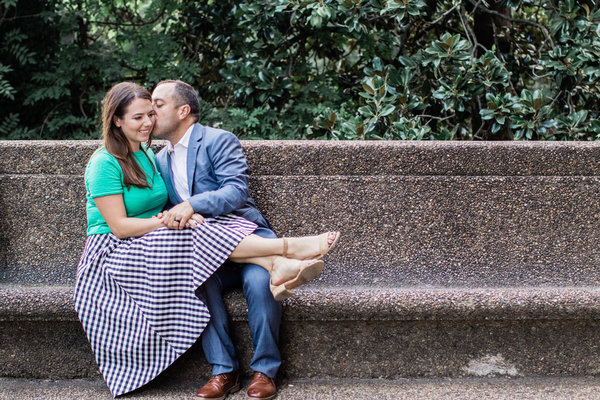 Elizabeth Frei and Benjamin Duchek connected through Tinder, the dating app, in late December 2016, but didn’t meet in person until the following March. He was stationed at the time at Fort Dix, in New Jersey, but his position as a major general’s aide brought him regularly to Washington, where Ms. Frei lives.

In the time before they met, the two texted often and then eventually talked every night on the telephone. That gave them a lot of time to get to know each other, so that when they did finally meet, “We had a 12-hour first date,” Mr. Duchek said.

The two had found that they had much in common, and both admire the kindness that they see in each other.

“It’s what I love most about her: She never has a mean word to say about anyone,” he said.

She realized she could rely on him, always. “When you really need him there, he shows up,” Ms. Frei said. “He doesn’t complain and it was so eye-opening for me to be in a relationship where I know I can count on that person.”

In July, she brought him to her family’s lake cabin in Minnesota. “In the first minute, my mom said to my dad, ‘This is it. This is the one,’” Ms. Frei said.

Ms. Frei recalls having had some trepidation about how her new boyfriend would feel about being thrust into the family’s traditional — and mandatory — Independence Day talent show. He did 100 push-ups for his talent. “It was such a weird situation, and he just took it head-on and enjoyed it and totally rocked it,” she said.

“It was the moment I really, really knew I wanted to spend the rest of my life with Ben,” she added.

The couple met at the Rhode Island School of Design, from which each graduated.

The bride is the daughter of Hong Zheng and Xiaobin Zhang of Beijing. Jia’s father is the chairman in Beijing for ELife Holdings, an investment holding company in Hong Kong, and was formerly the China senior adviser and managing director at J.P. Morgan. Her mother is the founder and principal of Dandelion School in Beijing, a nonprofit school for the children of migrant workers.

Mr. Finkelstein, 37, is a founder and an owner of Court Street Grocers, a group of restaurants in Brooklyn and Manhattan.

The groom is the son of Lawrence B. Finkelstein of Brooklyn and the late Susan B. Gluck, who lived in Hollis Hills, Queens. The groom’s father, who is retired, was a real-estate tax consultant in private practice in Hollis Hills. He currently serves as a baker and delivery driver for Court Street Grocers.

Martha Rose Shulman and Robert Alan Israel were married Jan. 5 at their home in Los Angeles. The bride’s sister, Melodie Bryant, who was ordained through the American Marriage Ministries, officiated.

Ms. Shulman, 68, is the daughter of the late Carol R. Shulman and the late writer Max Shulman, who lived in Westport, Conn. The bride is a cookbook author, having written works like “Mediterranean Light,” “The Vegetarian Feast” and “The Simple Art of Vegetarian Cooking.” Ms. Shulman is also a food columnist, having been featured in The Los Angeles Times and The New York Times.

Mr. Israel, 79, is the son of the late Lillian R. Israel and the late Dr. Barney B. Israel, who lived in Detroit. The groom is an opera and theater set and costume designer based in Los Angeles. His work has been seen at the Metropolitan Opera, the National Operas in London and Tokyo, the Paris Opera and the Vienna State Opera, among others. Israel’s costume drawings are in the collections of the Museum of Modern Art in New York and the Victoria and Albert Museum in London. He has designed the world premieres of four operas by Philip Glass and is the former chairman of the Theater Department at the University of California, Los Angeles.

The couple met through a mutual friend in 2015.

The bride’s first marriage ended in divorce and the groom was a widower.

Ms. Dean is the daughter of Kathleen M. McGettigan Dean and Gregory F. Dean of Potomac, Md. Ms. Dean’s father is the vice president for curriculum development at America’s Health Insurance Plans in Washington. Her mother is the chief management officer at the Office of Personnel Management in Washington.

Ms. Randall is a daughter of Tina M. Randall and Kevin E. Randall of Grand Rapids, Mich. Ms. Randall’s father is the head of underwriting and strategic execution at Farmers Insurance in Grand Rapids.

The couple met in June 2015 while celebrating during the Capital Pride festivities in Washington. Ms. Dean and Ms. Randall proposed to each other on the same day; in fact, Ms. Dean’s proposal inadvertently superseded Ms. Randall’s proposal.

Stephanie Cristina Formas and Stephen Thomas Carter were married Dec. 31. Jenny A. Durkan, who became a Universal Life minister for the event, officiated at the Brake and Clutch Warehouse, an events space in Dallas.

Ms. Formas, 32, is the chief of staff for Ms. Durkan, who is the mayor of Seattle. The bride graduated from Baylor University.

She is the daughter of Patty Huber Formas of Waco, Tex.

Mr. Carter, 33, is a senior communications manager at Microsoft in Redmond, Wash. He graduated from Whitman College, which is in Walla Walla, Wash.

He is a son of Gail Viseltear Carter of Virginia Beach and Donald F. Carter of Seattle.

The couple met and began dating in 2012 while working in Washington, both as regional press secretaries, for the Democratic Congressional Campaign Committee.

Maura Carey Whang and Deegan Ross McClung were married Jan. 5 at the Marigny Opera House, an arts and events space in New Orleans. Paola J. Martinez, a friend of the couple who became a Universal Life minister for the occasion, officiated.

She is the daughter of Eileen McCoy Whang and KyuJung Whang of Princeton, N.J. The bride’s father is the vice president for facilities at Princeton University. Her mother retired as the work-life consultant in the human resources department at Cornell.

Mr. McClung, 42, is the executive chef at Sadelle’s, a New York restaurant.

He is a son of Barbara Ross McClung and Daniel F. McClung of New Orleans. The groom’s father retired as the senior partner at Campaign Strategies, a Houston consultancy for Democratic candidates for national political office.

The couple met in 2011 at the Momofuku Noodle Bar in the East Village, where she was a hostess, when he came in to see one of her colleagues. Several months later, they had their first meaningful interaction at an East Village bar, when she recognized him as the well-remembered friend-of-a-friend and struck up a conversation with him.

Elizabeth Emery Rothman and Lee Miller Taglin were married Dec. 31 at the home of the bride’s parents in Los Angeles. Oona L. Curley, a friend of the couple who became a Universal Life minister for the event, officiated.

The couple met during a musical theater workshop while at Brown, from which both graduated.

Ms. Rothman, 29, is the director for new play development at Manhattan Theater Club, a Broadway and Off Broadway producer in Manhattan whose show “Cost of Living” was awarded the 2018 Pulitzer Prize for drama.

She is a daughter of Jessica Harper and Thomas E. Rothman. The bride’s father is the chairman of the Sony Pictures Entertainment Motion Picture Group in Los Angeles. Her mother is an actor who has had starring roles in “Suspiria,” “My Favorite Year,” “Stardust Memories,” “Pennies from Heaven” and other films. She is also a singer and songwriter and the author of “The Crabby Cook Cookbook” (Workman Publishing, 2010).

Mr. Taglin, 30, is the manager for international strategy and production at Disney Theatrical Productions, a division of the Walt Disney Company in Manhattan.

He is the son of Sarah Miller and Robert Taglin of Locust Valley, N.Y. The groom’s mother is the vice president for public affairs and education at Planned Parenthood of Nassau County in Hempstead, N.Y. His father retired as a credit-card consultant at the Auriemma Consulting Group in New York, and now facilitates musical programs for older adults and those with Alzheimer’s at the Samuel Field Y in Little Neck, Queens.

GraceAnn Caramico and Alfonse Robert Muglia were married Jan. 5. The Rev. David C. Santos performed the ceremony at St. Bartholomew the Apostle Roman Catholic Church in Scotch Plains, N.J., where he is the associate pastor.

The couple met while studying at Georgetown, from which each received a law degree.

She is a daughter of Joan M. Caramico and Michael J. Caramico of Scotch Plains. The bride’s father is a vice president and the tax director at Nasdaq, the stock exchange in New York.

Mr. Muglia, 26, is an associate at Riker Danzig Scherer Hyland & Perretti, a law firm in Morristown, N.J. He graduated with honors from Cornell.

The groom is the son of Denise E. Muglia and Alfonse P. Muglia of South Plainfield, N.J. The groom’s mother is the finance director at Integrity House, a Newark-based addiction treatment center. His father is a construction manager at the Atlantic Realty Development Corporation, a residential real estate developer in Woodbridge, N.J.