Ellen Jovin was settling in at a collapsible table she’d set up on the Upper West Side of Manhattan last month when two little boys of around 4 and 5 approached her.

“What’s a gerund?” one of them asked.

Charmed, Ms. Jovin explained that a gerund is a verb that has become a noun after an -ing has been added to it. “Run” is a verb but “running” is a gerund, she told them.

“Are you related?” she then asked them.

One boy said “yes.” The other said “no.” Then they started fighting.

“No choking your brother at the Grammar Table!” Ms. Jovin shouted. “Oh, and ‘choking’ is a gerund.”

Ms. Jovin is a new member of a city subway ecosystem known for its string-instrument musicians, break-dancers and religion preachers. About four times a week, she schleps a foldable table and a chair to locations such as a triangular sidewalk plaza outside a subway entrance off 72nd Street or inside the underground expanses of Grand Central Station or Times Square and sets up the Grammar Table. Its laminated sign reads: “Vent! Comma crisis? Semicolonphobia? Conjunctive adverb addiction! Ask a question! Any language!”

Ms. Jovin, 53, knows that a better understanding of the role of conjunctions will not put a stop to political divisions. But in a world of coarse discourse, why not create a little common ground by parsing past participles? “Language studies is something people can bond over and enjoy without getting into a huge fight,” she said. (Unless you’re 4 or 5, perhaps.)

Still, sitting at her table on 72nd Street a few days after the gerund-choking incident, she was met with skepticism. 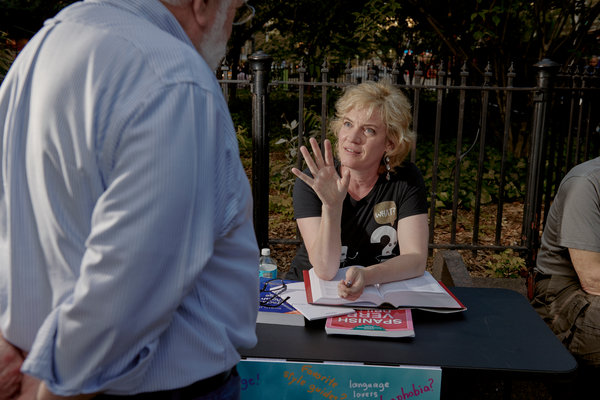 “I’m not sure what to make of this,” said Walter Bagley, a retired reporter and editor for Reuters who had been regarding Ms. Jovin with an arched eyebrow after exiting the subway.

“I really love grammar,” said Ms. Jovin who, with her husband, runs a business communications training company. She was wearing a T-shirt that showed a comma and question mark in conversation. The comma said, “Wait”; the question mark said, “What?”

Mr. Bagley laid out one of his grammatical pet peeves: the use of the proposition “of” along with an apostrophe-S when asserting possession. For example, Mr. Bagley said, “Joe Blow is a friend of Donald Trump’s.” (It’s hard to veer away from politics on the Upper West Side, even at a grammar table.) “It’s common in conversation,” Ms. Jovin said, and she believes it to be grammatically correct.

Mr. Bagley disagreed. He brought up his study of Latin and how that language tells us to express possession either with the “of” construction or with an apostrophe-S. But not both. Ms. Jovin said that Latin grammar is not always directly analogous to English grammar. Then Mr. Bagley left to attend a concert.

“I try to spread democracy,” Ms. Jovin said. “I think we should tolerate each other’s usages.”

Someone came by with the inevitable “less” versus “fewer” conundrum. “Fewer is typically used with things you can count, but weights and distances are exceptions,” she said. “Less” is used in references to mass nouns like sugar, flour or dirt. Ms. Jovin knows these rules are complicated and often misapplied. She referenced a recent article that reported “fewer than five percent of companies” have female C.E.O.s. The construction bothered her. “‘Fewer’ to me sounds pedantic in this case and even wrong” she said, because it applies to the percentage of C.E.O.s and not the C.E.O.s themselves. “I hate grammar snobbery.”

Long a language-obsessive, Ms. Jovin became deeply engaged on social media over the last several years, finding digital communities of fellow word lovers. But time spent on the computer was isolating. This summer she decided she needed a D.I.Y. intervention.

The Grammar Table, which she first set up in September, yanks her away from the computer while still letting her talk words with strangers. The start-up costs were minimal, and since she’s not selling anything, she doesn’t need a permit.

But learning the rules of the street has been harder than deciding when to deploy an Oxford comma. On rainy days, the competition between word proselytizers and The Word proselytizers can be intense. “I’m often in competition with the Jehovah’s Witnesses for the space,” she said. Earlier in the week, she found that a favorite under-an-eave perch had been snagged. “My grammar books got rained on,” she said.

On this sunny day, at around 5:30 p.m., a woman named Marcelle Rand approached with visible excitement. “This is so cool!” said Ms. Rand, whipping out her phone to show off her new Instagram account, @Copy­_Wronged, which she has begun to populate with error-ridden restaurant menus (“spinach and grounded spices”) and store signs (“We are closet today”).

“I’m so delighted to find like-minded freaks,” Ms. Rand said, and the two women discussed the evolution of the usage of the word “reticent.”

After Ms. Rand departed, Ms. Jovin noticed a teenage girl who had been pacing nearby and beckoned her over. The girl explained that she was originally from El Salvador, working on a college-application essay and struggling to understand the difference between passive and active voice. Ms. Jovin sent her home to fetch her paper. After the girl returned, she and Ms. Jovin spent 30 minutes together, strangers connecting over words.