When Luke Rivett spotted Sunney Kohlhoss on March 1, 2019 at the Well, a bar in Los Angeles, both had recently given up on love, resolving halfheartedly, that they would be single forever.

“When Sunney walked in, she took my breath away. I walked over to her and introduced myself,” said Mr. Rivett, 41, a filmmaker and producer for Anonymous Content, a production and management company based in Los Angeles and New York. “I knew my dream girl was standing in front of me. We talked for a few minutes. I told her, ‘I’m going to marry you.’”

“Luke was warm and outgoing,” she said. “I felt safe talking to him. I sensed sincerity.” Before leaving separately, they exchanged phone numbers. At 3 a.m., Mr. Rivett texted his new mantra, “I’m going to marry you.”

Several hours later they met for lunch in the Brentwood neighborhood. Ms. Kohlhoss mentioned she lived in Chicago, which deflated and disappointed him. He assumed, like him, she lived in Los Angeles. Yet, six days later Mr. Rivett flew to Chicago and Ms. Kohlhoss was waiting for him at the airport. The weekend was blissful, filled with witty banter and heartfelt conversation.

Things moved quickly. Over the next month they saw each other every weekend. In April, they spent Passover with her parents in Chicago. That night, Mr. Rivett invited everyone to New York for the premier of the film, “The Tomorrow Man,” for which he was a producer. They all attended. In May they traveled to Paris; in August they visited Australia, which is where Mr. Rivett is from. A proposal came in November.

“I had a hunch something was happening when we pulled up to this gold house in the desert in Joshua Tree,” Ms. Kohlhoss said. “Luke got on one knee and slipped a gold ring on my finger which said ‘reserved.’”

“I had it custom made on Etsy,” Mr. Rivett said. (Ms. Kohlhoss collects reserved signs from nightclub tables.) “It looks like an ’80s hip-hop ring. Her finger was reserved for the diamond ring we were going to pick out together, and she’s reserved for me.” 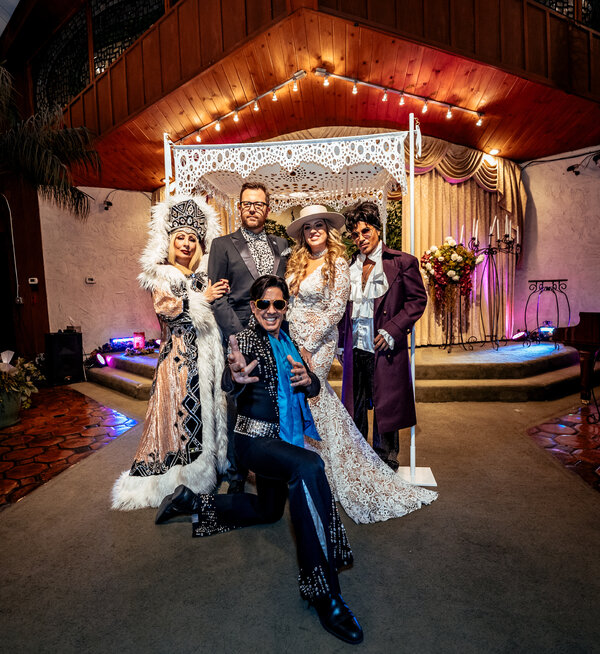 From December to March, the couple resumed their travel routine; one weekend in Chicago, the next in Los Angeles. When the pandemic hit, Mr. Rivett moved in with Ms. Kohlhoss.

“It was hard at first,” she said. “We went from two people living separately, to two people on top of each other. We learned about each other’s vulnerabilities. That allowed us to know how to be better partners.”

The couple were married Nov. 28 at the Viva Las Vegas Chapel. Ron DeCar, an Elvis impersonator and Nevada licensed minister, officiated before 20 masked guests. Ms. Kohlhoss walked down the aisle to “Let’s Go Crazy,” performed by a Prince impersonator, while a Cher double closed the ceremony with “Believe.”

“Covid gave us a chance to be creative, turning our wedding into a show for our in-person and Zoom guests,” Mr. Rivett said. “We got to pivot from the social requirements of a regular wedding and to let go of the pressures we were feeling.”

In between the entertainment, Rabbi Mel Hecht conducted a more traditional Jewish service. A reception followed at the Sahara Las Vegas hotel in a suite designed by the musician Lenny Kravitz.

“When I was reading those first texts the night we met, an alarm that went off in my body saying this is really something,” Ms. Kohlhoss said. “He’s a giant koala bear. His love is like a big hug that never ends. I didn’t think I needed that. Now that I have it, it’s the most valued part of my life.”

“Being with her is pure excitement,” Mr. Rivett said. “The warmth of having a best friend and an unconditional partner is something I never thought I’d have.”