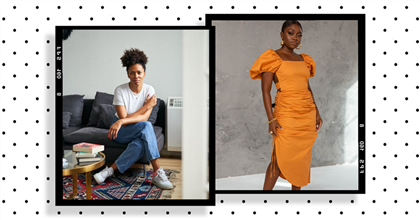 Written by Naomi May

Small and medium-sized businesses make up 99.68% of Britain’s £35 billion fashion industry, but over six months on from the UK’s exit from the European Union – and with the pandemic having dominated the headlines, how are female founders faring?

The Underargument, a premium London-based lingerie brand which casts its models based on the stories about themselves that they submit, was founded by Normandy native Maïna Cissé in 2016. It’s lingerie with heart and 2020 was “the peak for the brand”, Cissé tells Stylist, as it was gaining serious momentum for the first time since its inception.

Cissé, who moved to London in 2008, took the brand to trade shows in Paris and New York in January 2020 which went “really, really well” and, given the founder’s French heritage, the brand began gaining more exposure in Europe which, in turn, resulted in more organic growth on the continent.

“The brand gained a much wider customer base across Europe and we saw a peak in orders from Scandinavian and central European countries,” she explains. “And then, quite literally, from 1 January 2021, we received absolutely zero orders from these places where we’d become popular. It was radical and, honestly, I wasn’t expecting it.”

Maina Cissé, founder of The Underargument

Of course, 1 January this year was the first day after the UK crashed out of the European Union, five years after the 2016 referendum where 51.9% of people voted to leave the political and economic union after 43 years of membership. Despite years of negotiations, the UK eventually left with a hastily arranged final deal which was drawn up in the final hour and left all businesses, but particularly small and medium-sized offerings such as Cisse’s, with little time to prepare, despite the promise of a ‘transition period.’

“Since the start of this year, sales of my business have gone from being 30% European to being 80% from the UK and America,” Cissé explains. “Europe has pretty much disappeared from my customer base.”

While the rest of us dealt with the blows of the pandemic, independent fashion founders have had to grapple with setbacks proposed by Brexit, as well, despite fashion contributing “more to UK GDP than fishing, music, film, pharmaceuticals and automobile industries combined,” according to Fashion Roundtable, a UK fashion industry thinktank.

“It is not being talked about enough just how devastating this has been for businesses,” states Fisayo Longe, the founder of cult brand Kai Collective, whose headquarters are, for the moment, based in London.

While Kai Collective’s pieces have never been manufactured in Europe, in January and February 2021, the brand experienced what Longe refers to as ‘severe delays’ with stock deliveries because of a ‘backlog due to Brexit’. Longe’s customers on the continent, who have grown accustomed to not having to pay VAT and tariff charges on their orders, are now “rejecting deliveries because they don’t want to pay the extra costs.” According to Cissé, “Costs upon receiving an order amount to around 50% more than people have already paid on the website.”

Small and medium-sized businesses, like Longe’s and Cissé’s, make up 99.68% of Britain’s £35 billion fashion industry. According to research, fashion is estimated to be worth 1.6% of UK gross domestic product, yet post-Brexit trading is casting a bleak shadow over the 52,000 smaller businesses which form the backbone of the industry.

“The short time frame from announcement of the UK’s deal with the EU to implementation, meant that not only industry but government agencies in the UK and in the EU grappled with the impact and how to approach trade and tariffs,” states Caroline Rush, CEO of the British Fashion Council.

In an open letter to the UK’s prime minister at the start of this year, over 450 stakeholders within the fashion industry, including models Twiggy and Yasmin Le Bon, confirmed that Brexit was strangling the complex international supply chains and relationships that underpinned their industry.

“Pre-pandemic [the UK fashion industry] was growing 11% year on year. But there is a real risk of it being utterly decimated from the gaps in the Brexit trade deal and UK government policy,” they wrote in the letter, which was co-ordinated by the Fashion Roundtable, an industry forum. “The deal done with the EU has [left] a gaping hole where promised free movement for goods and services for all creatives, including the fashion and textiles sector, should be.”

Manchester-based Natasha Fernandes Anjo, the founder of conscious fashion set-approved accessories brand Roop, launched her business in 2019. “Before Brexit officially happened, my biggest customer base was in the UK, my second was Paris and then it was America. I had a lot of international orders, particularly during the first lockdown which is when Roop really took off and I really did send things out everywhere,” Fernandes Anjo says. “Now it’s just London or America.”

A group of burgeoning fashion brand founders, including Fernandes Anjo, collectively stopped accepting orders from Europe in a bid to understand the additional fees and costs that brands and customers were incurring. “It’s all very overwhelming, particularly as a small business. The official documents explaining what’s what are very technical and not very helpful; the information is there, but not in a way that anybody who didn’t write it would understand.”

A solution to the surge in bureaucracy which businesses are having to face could be to pivot to a local supply chain, which is to say re-locating the manufacturing and production of products to British shores. In fact, a fleet of recently launched It brands including Roop, whose wares Fernandes Anjo crafts by hand in Manchester, Monika The Label (which launched in summer 2020) and Molby The Label make their fashion set-approved wares in the UK, as do lingerie labels Fruity Booty and Lara Intimates.

Fernando Anjes is clear. “I’ve found an increase in the number of British customers that have messaged me to tell me that they found me because they’re looking to shop with smaller, handmade British brands. The conversation surrounding where our clothes come from and who makes them seems to really be influencing people’s habits.”

For Longe, though, who intends on re-locating to open a warehouse and office in America next year, making Kai Collective’s pieces in the UK doesn’t make sense. “To make everything here is just too expensive,” she asserts. “Before Brexit, we were looking at how to build our Europe audience more but now I am more focused on America. The UK has always been an island, but with Brexit, it’s now even more of an island.”

Fernandes Anjo has been considering recently what she can do to maintain her American base, but also claw back her European customers, and the solution, she believes, is in having wholesale retailers on each continent (her British wholesale partner is Selfridges). “My long term plan is to keep the ethos of Roop here in the UK, but to have wholesalers in Europe and America, so that people can still buy from me and they don’t lose any of the brand story, but it’s more readily available to them wherever they are,” she says.

Due to increased courier costs, though, it now costs both Longe and Cissé, whose businesses are both direct-to-consumer, the same amount to send deliveries to America as it does to send to Europe, meaning both of them plan on moving their headquarters out of London in the foreseeable future.

“For as long as I can, I’m going to put off moving my headquarters, but eventually elements of it will have to move,” Cissé says. “It’s kind of like starting my business all over again, because I’ve lost all of the European customers that I worked so hard to get. There’s a lot of work to be done on gaining back my old customer base and re-introducing the brand to people.”

Rush, though, who has worked in tandem with the government to advocate on behalf of the fashion industry, is clear on the progress that’s been made. “There is still a lot of work to be done, especially in an industry that is focused on achieving positive change,” she states. “Unfortunately, the challenges of Brexit didn’t happen in a vacuum – businesses have also had to deal with the additional impact of the Covid-19 pandemic, but what is important, now more than ever, is that our European and international friends remember that the UK is still open, despite Brexit.”