In the 1950s, women across the country wore practical, button-down housedresses with tight waists and deep pockets. In the ’80s, shoulder pads were a symbol of power in the workplace, but also up and down supermarket aisles. In the aughts, moms (and their daughters) wore a whole lot of Juicy Couture velour sweatsuits.

For years, black Lululemon yoga pants and Uggs were the axis of the mom uniform, until the media cruelly shamed women out of them. Then last year, a pair of deliberately beaten-up-looking $500 Golden Goose sneakers and what is known as simply the “Amazon jacket,” a $130 parka, was seen on moms in Chappaqua and Short Hills alike.

But in Brooklyn recently, a decidedly more bohemian expression of middle-aged fashion has emerged.

This ensemble is made up of two accessories: Part 1 is the No. 6 clog, which has become ubiquitous in upscale Brooklyn neighborhoods and on celebrities like Keri Russell, Julianne Moore and Claire Danes.

Zora Ginsburg, a mother of two and a sales specialist for Rebecca Taylor who lives in the Clinton Hill section of Brooklyn, has been wearing her No. 6 clogs for about eight years. She owns them in a variety of colors — the shearling, the slides, the zip-up boots — and never deviates from the brand. When she’s not wearing No. 6 clogs, she’s wearing Isabel Marant bootees and Dr. Martens.

Ms. Ginsburg was introduced to the strap by her friend Kacy Lubell, an owner of Salt, and rotates multiple straps between her Balenciaga, Fendi and Proenza Schouler PS1 bags. (Ms. Ginsburg once helped style a Salt shoot and in return received a strap; the rest, she paid for.)

Ms. Ginsburg was glad to see the strap taking off around Brooklyn and didn’t think that an army of look-alike moms was impeding her look.

“It’s like we’re matching,” she said, noting that the strap reminded her of the woven friendship bracelets she used to make in camp. “It’s a unique way of styling yourself. When I see someone in a strap or a clog I don’t have, I think, ‘That looks good. I want that.’” 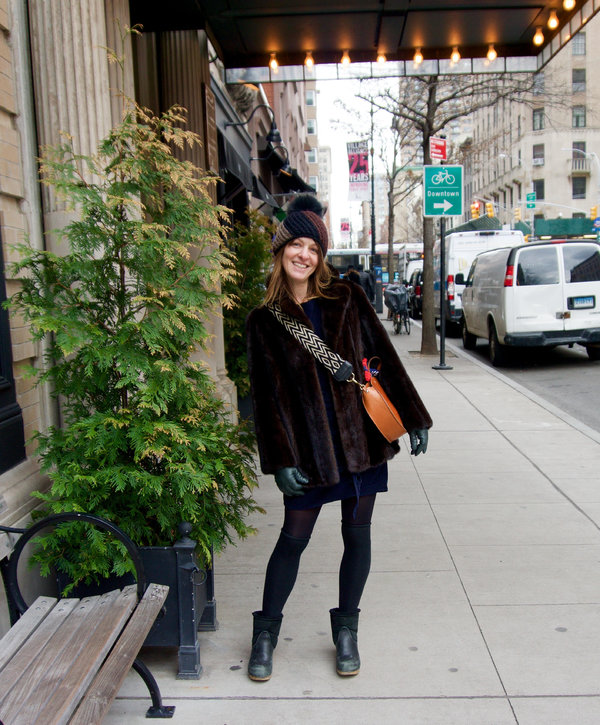 This wasn’t the intention, to be so matchy. “We view the Salt strap more as a way to make your bag unique,” Ms. Lubell wrote in an email. “Customers send us so many bag and strap combinations and it seems like everyone is wearing it differently.” (Ms. Lubell said she “lives” in her No. 6 clogs and her strap.)

Yet sometimes it seems that choosing to wear the same clothing as the people around us is a lot less about our materialistic desires than it is about our evolutionary development as humans.

That women in the same area are drawn to similar styles makes sense. Our evolutionary prehistory shows that we needed many people to help us raise our offspring, so we surrounded ourselves with those who had similar values or who looked like us.

We can still see an echo of that today, said Wednesday Martin, a social researcher whose most recent book is “Untrue,” a study of female infidelity.

Ms. Martin owns four pairs of No. 6 clogs; she keeps two in her Manhattan apartment, the other two she keeps at her house in Sag Harbor. She does not own a strap, but she is familiar with them.

Ms. Martin compares the woman who dresses like her peer group to the bonobo ape: a female-dominant species that leaves its kin behind and bands together to form new communities to fend off male aggression.

“You can see how important it is for mothers to do this particularly when you consider how strange and isolating and depleting we have made motherhood in our culture,” she said. “Through very canny social strategizing, we survived as a species through affiliating with others and by making others feel like kin.”

Like the man in the gray flannel suit showed, or the Pink Ladies with their embroidered pink jackets in “Grease,” or the Teddy Girls of London with their rolled up dungarees and blazers, or sure, mom jeans, wearing the same clothing sends a signal: On the one hand, it links you to people you want to resemble, and on the other it separates you from people you don’t want to resemble.

The idea that fashion has these conflicting sides was first theorized by the sociologist Georg Simmel at the turn of the 20th century, according to Valerie Steele, the director and chief curator of the Museum at the Fashion Institute of Technology. “It’s like a double-edged knife,” she said. “It made you part of a group, and it also made you an individual away from another group.”

“So you always had that ‘Oh the horror,’ of women in the ’50s when they went to a party and someone was wearing the same dress,” she said. “But I think that overlooks the fact that in many other ways, women wanted other women in their group to be wearing very similar clothes.”

SaSaDi Odunsi, 42, a Park Slope mother of four and the co-owner of a bead collective, owns two pairs of No. 6 clogs as well as the blue and white “Duke” Salt strap, currently hooked onto an Oliveve snake-print leather bag.

She bought the strap because her children and Ms. Lubell’s children attend school together and she wanted to support a “mom-owned business.” Recently, she has seen a number of women around town wearing the strap/clog combo, which she gets a kick out of.

“There’s a pretty affluent population of parents here, without question, which will help define whether or not people are buying certain things,” Ms. Odunsi said. “Because we all know these things cost money. And sometimes when a trend is outrageously expensive, I look around and think, ‘Ooh, there’s a lot of people who can afford a lot of those things.’” She lives in Park Slope, after all, where the average home goes for about $1.2 million.

Earth-mother message aside, a pair of No. 6 clogs can cost upward of about $450, and the strap, at $140, is marketed with bags that 99 percent of women can’t afford.

Yet because of its straight-out-of-Laurel-Canyon-circa-1969 look, combined with a charitable element (Salt has a partnership with artisans from the La Guajira region of Colombia, according to its website, and donates a portion of its proceeds to the Wayúu Tayá Foundation, a Colombian nonprofit), the strap, in a way, “counters or at least reduces the extravagance of the bag,” said Carolyn Mair, a psychologist and founder of a consultancy firm, Psychology.fashion.

“I think it’s less acceptable now, at least in some circles, to be totally oblivious to the problems in the world,” Ms. Mair said. “So perhaps by wearing the strap, these women want to be seen as acknowledging issues elsewhere by supporting a social cause.”

Same goes for the clogs, which in many ways can’t be separated from their working-class present (clogs show up in the workplace on cooks, nurses, farmers and gardeners) and past. (They originated among Dutch dairy farmers and later became a common work shoe in Europe during the Industrial Revolution.)

They’re not known to be pretty or dainty, or even fashionable. In an oft-cited article on the clog, Lauren Mechling, who is behind the Instagram account Clog Life (and has contributed to The New York Times), wrote that her husband once compared them to “oversized eggplants.”

For moms, specifically, the No. 6 clog gives off a message that you’re very much interested in comfort and not so interested in appearance. Harling Ross, the fashion editor at Man Repeller, described this as “Menocore.” a hateful takeoff on normcore, celebrated mostly by women in their 20s on Instagram who haven’t even started going through perimenopause yet.

It’s also possible that this new uniform is just about good timing. The Salt strap, for example, is benefiting from the handbag industry slump.

“Right now, the handbag industry is missing an ‘It’ shape and an ‘It’ brand,” said Debbie Forman-Pavan, a luxury and contemporary accessories consultant. With this strap, she said, women can give their $4,000 Hermès bag or their $500 Michael Kors bag a “little face-lift for just 140 bucks.”

If only an actual face-lift cost so little — am I right, ladies?