Carrie Sun and Christopher Cerrone met on April 20, 2018 in Manhattan after a classical music concert held at St. Peter’s Church. She had just quit her job at a hedge fund and was planning to leave New York. Her movers were coming in 21 days.

Even so, they had drinks after the concert and he asked for her number. Then he invited her to a screening of the opera, “Invisible Cities,” at the Brooklyn Academy of Music.

Ms. Sun, 35, who received degrees in mathematics and finance at M.I.T., accepted his invitation, knowing she was about to enroll in a creative writing M.F.A. program at Hollins University in Roanoke, Va.

Mr. Cerrone, 36, a graduate of the Yale School of Music, where he received masters and doctorate degrees, is now a professional composer. And that opera was his. He was a 2014 Pulitzer finalist in the music category for the composition.

“I didn’t think a screening was a proper date since we barely had any alone time, but he asked me out on a second date to go to the Brooklyn Botanic Garden,” Ms. Sun said.

She asked him out two days after that. “We ended up having three dates in one week,” she said.

After the third date, the couple saw each other every day. They discussed a wide range of topics, including: literature, music, economic inequality and “The Sopranos.” They also talked about his father, who emigrated from Italy in the 1940s, and her parents who studied English in China and then immigrated to the United States — her father in 1988, she and her mother in 1990.

“Chris and I discovered that we had matched on Tinder the previous year, but neither of us had messaged each other,” she said. “He looked me up on Facebook and decided against contacting me because I worked in finance.”

Mr. Cerrone had terrible online dating experiences. Ms. Sun’s profile was very minimalist. The only thing that struck him was a mutual friend she listed. “Using that tiny detail, I scoured Facebook and discovered that Carrie worked in finance, which was enough for me to write her off,” Mr. Cerrone said. “Nevertheless, I called her. Speaking to her, I realized that she was an extremely interesting and thoughtful person. She challenged me to rethink some of my long-held biases.” 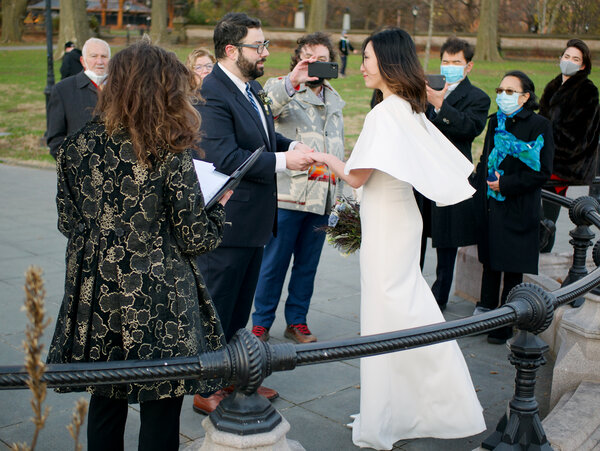 Five days before her move to Virginia, Mr. Cerrone told Ms. Sun that he really liked her, but at the age of 34, he didn’t want to sign up for a two-year long-distance romance. “Neither did I,” Ms. Sun said. She had an offer from the New School for an M.F.A. in creative writing that she turned down, but called and discovered that the offer and scholarship were still available. “I called Chris. It’s been decided. I’m staying.”

Two weeks later, at a violin concerto premiere with the Detroit Symphony Orchestra, Mr. Cerrane met her parents. The night before the concert he told Ms. Sun that he loved her. A month after that, she moved into his place in Brooklyn.

They were engaged Aug. 30, 2019 after a trip to the Bronx Zoo and then Little Italy on Arthur Avenue in the Bronx. “I led Carrie to the nearby Ciccarone Park, where I sat her on a bench and proposed,” Mr. Cerrone said. “This was the perfect spot. It was beautiful to see families old and young, from different backgrounds congregating together.”

The couple were married Dec. 2 in the Concert Grove section of Prospect Park in Brooklyn. Jennifer Milich, a minister of the Universal Brotherhood Movement, officiated before her parents, Qiao Cui and Wenqiu Sun of Dexter, Mich., and Mr. Cerrone’s parents, Barbara Cerrone and Bernard Cerrone of Blue Point, N.Y., along with a few close friends.

“Carrie is the most extraordinary person I’ve ever met,” Mr. Cerrone said. “Not only is she smart and interesting and kind, but she jumped first and changed her life around to be with me. All I want to do is support her in her work as a writer.” Ms. Sun is currently working on a memoir.

“We want to discuss books, films, and music to the tiniest level of minutiae for the rest of our lives,” Mr. Cerrone said.

12/18/2020 Fashion Comments Off on The Classical Concert That Changed Their Lives
Recent Posts
We and our partners use cookies on this site to improve our service, perform analytics, personalize advertising, measure advertising performance, and remember website preferences.Ok