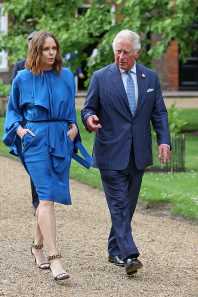 LONDON — The Prince of Wales has gathered some of the world’s most powerful chief executive officers to meet with world leaders at the G7 summit in Cornwall, England, and call for “coordinated action to tackle climate change.” The group is known as the Coalition of the Willing and the CEOs manage a total of $60 trillion.

Representing the fashion industry is Stella McCartney, who was pictured with Prince Charles leaving St. James Palace in London this morning. She was wearing an elegant draped blue midi dress from her own line and chain-embellished, heeled sandals.

“I am honored to represent the fashion industry today, one of the most polluting in the world. My goal is to drive change, encourage investments and create lasting difference through incentives supporting the next generation,” said McCartney.

“I hope the G7 Summit will translate our message into policies bringing us closer to creating a cruelty-free society that is kinder to all creatures, Mother Earth and each other,” she added.

Business leaders from institutions including the Bank of America, NatWest, HSBC, AstraZeneca and Heathrow Airport were also present.

This summit marks the first time CEOs will have official face-to-face meetings with world leaders to discuss sustainability.

Encouraging collaboration between governments and business has been a priority of the Prince of Wales, who has been gathering the Coalition of the Willing for the last two years and working with them to develop a series of initiatives to tackle climate change.

Today the group will present three key initiatives to global leaders, including plans to drive private financing to sustainability projects; recommendations for potential government policy, and suggestions for coalitions to drive change for some of the world’s most polluting industries, fashion and textiles included.

“We have a potentially game-changing opportunity to drive forward the partnerships between government, business and private sector finance that are absolutely vital if we are to win the battle to combat climate change and biodiversity loss. Unless we deploy private sector resource, innovation and finance more effectively, we just don’t stand a chance,” said Prince Charles.

“Redirecting private finance flows towards sustainable investments is a cornerstone of France’s climate action agenda. I agree with The Prince of Wales: it is urgent we facilitate, accelerate and increase these flows,” said Macron, who is attending the G7 Summit in Cornwall with his wife, Brigitte Macron.

Brigitte Macron is expected to tour a local school later in the day and host a roundtable discussion with the Duchess of Cambridge.