The party that introduced the Design Works of Bedford-Stuyvesant textile collection at the Metropolitan Museum of Art in October 1971 drew quite a crowd.

Ethel Kennedy was in attendance along with Babe Paley, the socialite; so were Diana Vreeland, the editor of Vogue, and Bunny Mellon, the philanthropist and horticulturalist. The guest who got the most attention that evening, as guests perused the array of textiles featuring African motifs in bold colorways, was Jacqueline Kennedy Onassis.

“It was a very glamorous evening,” said Hermine Mariaux, 87, the homes editor for House and Garden at the time, who attended the gala and recalled the Senegalese dancers that performed. “It was the very first party like that held at The Met. Prior to then, the museum never would have engaged in commercial activities, but they agreed to it, because Design Works of Bedford-Stuyvesant was important to Jackie.”

The collection was an initiative of the Bedford-Stuyvesant Restoration Corporation, the first community development corporation to be established in the United States. The result of legislation passed by Senator Robert Kennedy, Jr. in 1966, the corporation sought to stimulate the local economy of the neighborhood of Bedford-Stuyvesant by instituting programs for employment, education, health care and development. 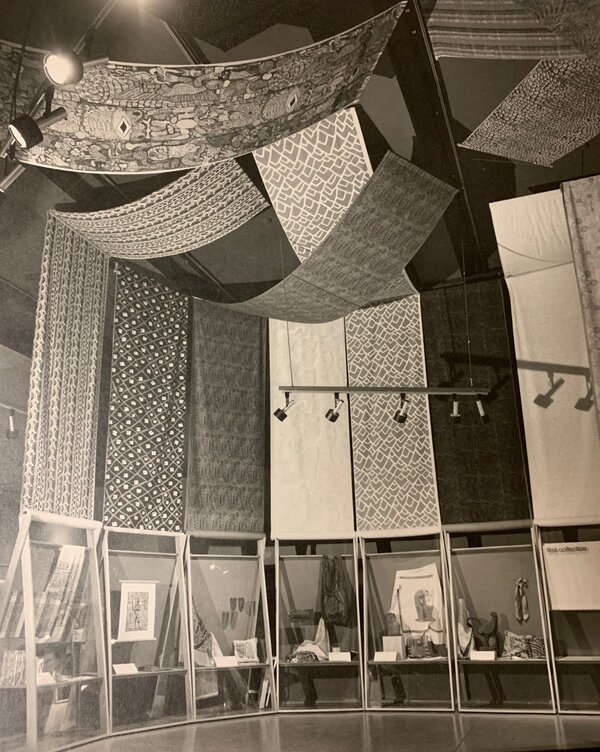 In 1969, inspired by her brother-in-law’s efforts, Mrs. Onassis created Design Works to help amplify the talents of artists living in Bedford-Stuyvesant. She asked her friends, D.D. and Leslie Tillett, the husband-and-wife design team behind Tillett Textiles, to collaborate. The couple’s vivid, large-scale, screen-printed fabrics — created by hand in their small Manhattan-based printing operation — were favored by top designers and influential figures, including Mrs. Onassis, who used the textiles for upholstery and draperies in the living quarters of The White House.

The Tilletts had invested in communities outside the United States, said their grandson Patrick McBride, 48, who now owns and operates Tillett Textiles; Leslie died in 1992, D.D. in 2008. They taught printing and design techniques to South Korean producers of raw silk and helped bring their products to the U.S., and consulted with emerging businesses in China, Lesotho and Peru. “Jackie suggested to my grandparents that they turn their attention to helping groups in hard-hit areas of this country and they loved the idea,” Mr. McBride said. “They were very enthusiastic about inspiring talent and design in Bedford-Stuyvesant and to teaching members of the community their intensive hand production processes.”

The etiquette expert Letitia Baldrige and Ted Kennedy’s secretary were among those solicited to fund Design Works of Bedford-Stuyvesant, according to documents in Mrs. Onassis’ personal correspondence cataloged at the John F. Kennedy Library in Boston. The Tilletts signed on as advisers for a $1 fee. The idea was that the couple would teach their signature techniques for silk-screen design and printing to young people in Bedford-Stuyvesant who would go on to produce hand-printed fabrics for the design trade on their own.

The Tilletts did outreach to find residents who were interested in learning the craft. Carlos Ortiz was 22 and about to graduate from the Fashion Institute of Technology when a professor introduced him to Leslie Tillett.

“He went on to be a great mentor to me,” said Mr. Ortiz, now 72, who was with Design Works from its inception and soon became its chief colorist. “Leslie told me: ‘You will learn how to do it all. And he followed through. They taught me everything from design to mixing colors and pigment to printing.”’

The fabrics created by Design Works of Bedford-Stuyvesant were designed by members of the community, led by first Calister Thomas and then Sherl Nero (both now deceased), and drawn from African history, Mr. McBride said. Motifs included abstract fish scales, zebra stripes, oversize banana leaves, roosters, and cowrie shells along with bold geometric prints and stylized abstracts. “The colors were incredibly saturated,” he said.

In the 1970s, ready for a slower pace, his grandparents moved operations to Sheffield, Mass., where they’ve remained. With views of the Berkshire mountain range, the Tillett screen-printing facility’s pastoral setting feels more like a small artist colony than a fabric manufacturer with clients all over the globe. Mr. McBride travels between there and New York City; his mother, Kathleen Tillett, who works in the business alongside him, lives on the property full-time.

The library there contains more than 900 patterns designed by the Tilletts dating back to the 1940s, including several created in collaboration with Design Works. “There are a lot of stories in those hundreds of patterns,” Mr. McBride said. “I felt like the Design Works story was one that needed to be told.”

Mr. McBride’s way of telling the tale now is to reintroduce the fabrics from the collaboration of Tillett and Design Works, with a portion of the profits to be donated to the Kips Bay Boys and Girls Club. Four patterns in three colorways have recently become available to the trade. Tote bags, throw pillows and face masks in the patterns may be ordered through the company Instagram account. “We’ll release other patterns from Design Works gradually,” said Mr. McBride, noting that the fabrics are made of Belgian linen, which is more modern and luxurious than what was available during the 1970s.

“There has been a resurgence of using vibrant, rich colors in interiors,” he said. “People are feeling excited about color. Releasing these fabrics in their original saturated rich, tones is authentic to history and lends itself to what’s going on in the design world today.”

Before it shut down in 1978, Design Works was housed in a five-story building in Bedford-Stuyvesant with a ground-floor boutique. In addition to decorative fabrics, the initiative also produced ready-to-wear fashion, stoneware and jewelry in limited quantities. The textiles, which were distributed by Connaissance Fabrics throughout the country, however, became the prime focus. “It was a vertical operation, we designed, mixed colors, printed and cured the fabric on site, and handled shipping. It was rare for all of that to happen in one location back then,” said Mr. Ortiz, who will bring his own collection to market next spring.

Ms. Onassis incorporated Design Works fabrics into the Fifth Avenue apartment she shared with her husband, Aristotle. The rooms were featured in the November 1971 issue of House Beautiful. In a photo of the library, the sofa is upholstered in Fish Head Plaid, an abstract of crisscross floral and polka dot motifs that strikes a whimsical note among the French antiques, a rare needlepoint rug and 19th century volumes in the floor-to-ceiling bookcases.

Ms. Mariaux also used textiles from Design Works in her Manhattan apartment during the early 1970s. “I loved the patterns. They were pretty dramatic for the time. My favorite was a natural canvas ground-cloth printed with espresso brown cowrie shells,” she said.

“The collection was very well received, not just because people really wanted to support the community of Bedford-Stuyvesant — which they did — but because the fabrics Design Works created were especially unique and beautiful,” Ms. Mariaux said. “It’s nice to know they will be available once again.”

12/28/2020 Fashion Comments Off on Some of Jackie O.’s Favorite Fabrics are Back on the Market
Recent Posts
We and our partners use cookies on this site to improve our service, perform analytics, personalize advertising, measure advertising performance, and remember website preferences.Ok