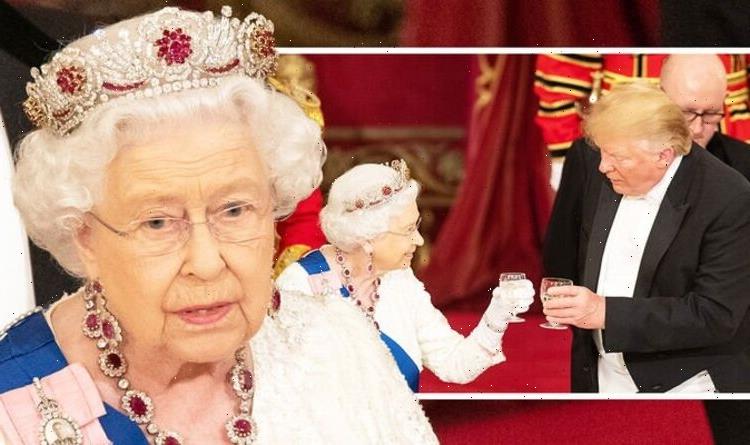 When Donald Trump attended a State Banquet at Buckingham Palace in 2019, Queen Elizabeth II’s choice of tiara raised eyebrows. Jewellery expert Maxwell Stone told Express.co.uk what the accessory represents and why it might indicate unsavoury feelings for the former US President.

Maxwell Stone exclusively told Express.co.uk: “Queen Elizabeth has a lot of tiaras in the royal collection, but one that always sticks in our minds is the Burmese ruby tiara.”

When she donned this tiara during Donald Trump’s state visit, many speculated that she selected this piece especially to ward off the politician.

Maxwell explained: “In total, there were 96 rubies which were combined with a selection of diamonds to create the new tiara.

“Interestingly, there’s a good reason why this tiara features a specific number of rubies, and why the people of Burma gave Queen Elizabeth a specific 96 stones.”

“Rubies are believed to have healing qualities, and Burmese people believe that there are 96 illnesses which could hit one’s body, so the 96 rubies were a gesture of protection for the Queen and her health.

Therefore, when the queen opted for this specific tiara out of so many potential options to greet the former President, it inspired some controversy.

Indeed, Maxwell said: “Because of the special meaning the rubies hold, it’s been rumoured that the Queen was sending subliminal messages to the former President by wearing that particular tiara.”

Was Donald Trump an “illness” that the Queen was trying to fend off, according to the people?

Royal fans took to Twitter at the time to discuss the symbolism behind the tiara.

“Rubies are supposed to protect the wearer from evil. More subtle shade? Hope so! #TrumpUKvisit #TrumpsAnInternationalDisgrace.”

Maxwell reasoned: “While it’s impossible to know if this is the case, the tiara received a lot of attention and ultimately became one of the Queen’s most talked about pieces.”

But how did this controversial brooch come to be?

Maxwell continued: “In 1973, she commissioned House of Garrard to create the Burmese Ruby Tiara using the gems she received as a wedding present from the people of Burma.

The epitome of extravagance, 96 rubies were combined with a selection of diamonds to create it.

However, the Queen had to dismantle another tiara in order to complete it.

The sacrificial lamb, as it were, was the Nizam of Hyderabad tiara.

The rest of the accompanying set, including three brooches and a necklace worth more than £66million, are still in tact, with Kate Middleton borrowing the necklace on occasion.

Maxwell concluded that whilst the ruby tiara is undeniably steeped in controversy, it is also “sentimental” and “valuable”, as “Burmese rubies are extremely precious and rare”.

“The tiara’s jewels are set in a series of rose motifs inspired by the Tudor Rose, which pay homage to British Heritage.

“Considering the number of rubies and diamonds featured in this piece, we estimate it has a staggering value of around £7,000,000.”