Princess Beatrice, 31, shared images from her royal wedding today after marrying in secret yesterday. Buckingham Palace shared details of the day – and it seems Beatrice broke with tradition when it came to her wedding dress.

Unlike other royal brides, Beatrice didn’t have a new dress designed and made for her.

Instead, in a highly unusual move, she borrowed a gown from the Queen.

Beatrice wore a vintage Peau De Soie taffeta dress in shades of ivory by Norman Hartnell, on loan from the Queen, trimmed with Duchess satin and encrusted with diamantés.

The dress was remodelled and fitted by the Queen’s senior dresser Angela Kelly and designer Stewart Parvin, Buckingham Palace said. 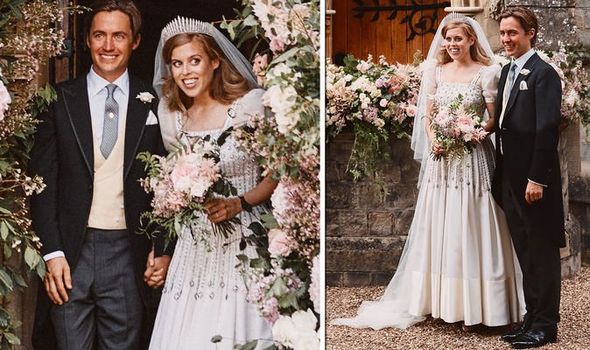 This decision puts Beatrice at odds with other royal brides, who all chose to have a dress made for them.

Meghan Markle employed the services of British designer Clare Waight Keller at Givenchy for her 2018 wedding.

Kate Middleton turned to Sarah Burton at Alexander McQueen when she wed Prince William in 2011.

And Beatrice’s sister Princess Eugenie chose Peter Pilotto and Christopher de Vos to create her white gown when she walked up the aisle in 2018.

Even the Queen had a new wedding dress back in 1947, famously saving up ration coupons to get enough material.

However, there is one similarity between the Queen and Beatrice – Norman Hartnell, who died in 1979, designed both of their dresses.

This is not the only nod to her grandmother Beatrice made on her wedding day.

The young bride also wore the same tiara the Queen wore when she wed Prince Philip. 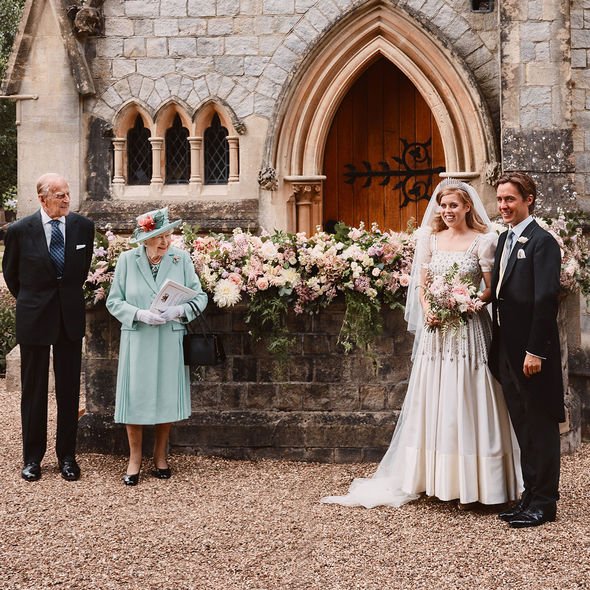 Eugenie stepped out in the glittering Queen Mary’s Fringe tiara, a diamond diadem whose design was inspired by the court of the Romanovs.

Like much of the jewellery in the Queen’s collection, this originated with Queen Mary.

Queen Mary had this made in 1919 according to the fashions of the time – and it is not, in fact, the only fringe style tiara in the Queen’s collection.

It is often confused with Queen Adelaide’s Fringe – a smaller, more delicate piece made in 1831 and worn by many British royals in history. Queen Elizabeth is not known to have worn this particular piece publicly.

Elizabeth is not the only royal bride to wear this tiara – Princess Anne chose it for her wedding to Mark Phillips in 1973, and again, it was a loan from Queen Elizabeth the Queen Mother.

After the Queen Mother’s death in 2002, the tiara passed to Queen Elizabeth, and she has worn it on a few occasions since, including for her New Zealand’s Diamond Jubilee Portrait.

For her big day, Beatrice wore her auburn hair in loose tumbling waves around her shoulders.

Her simple hair and makeup choices allowed her dress, which featured heavy embroidery detail, to take centre stage along with the glittering tiara.