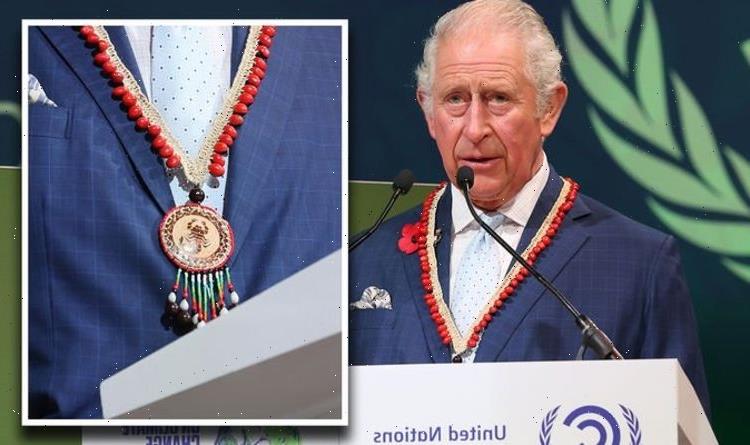 Prince Charles is representing the Royal Family at the COP26 climate summit in Glasgow this week. After delivering the summit’s opening address on Monday, Charles made another announcement on forests on Tuesday.

What does Charles’ necklace mean?

Charles wore a necklace with a scorpion for his second speech at the COP26 summit this week.

His speech highlighted the need to “honour the rights” of local communities, leading him to explain his choice of necklace.

He said: “The world needs as a real matter of priority and justice is to safeguard and honour the rights of indigenous peoples and local communities, who depend on the forest for their lives and livelihoods.

“And who are themselves wise and experienced custodians.

“In fact, I’m wearing what I’ve been given earlier when I met them – and this one comes from Ecuador.”

Charles was given the necklace by Juan Carlos Jintiach, coordinator of international economic cooperation and autonomous indigenous development of the Amazon Basin, prior to his speech.

Prince Charles visited Ecuador in 2009, and he also toured the famous Galapagos Islands.

Charles and Camilla also visited the country’s capital of Quito, where they spoke to senior government officials.

Why is Charles at COP26 this week?

Prince Charles is one of four members of the Royal Family attending the COP26 climate summit in Glasgow this week.

Charles was joined by his wife Camilla, Duchess of Cornwall, his son Prince William and his daughter-in-law Kate, Duchess of Cambridge, for the opening reception on Monday.

Charles gave a poignant opening speech on Monday evening, where he called on world leaders to act in the face of the looming climate crisis.

In his final remarks, Charles told delegates: ” I can only urge you, as the world’s decision-makers, to find practical ways of overcoming differences so we can all get down to work, together, to rescue this precious planet and save the threatened future of our young people.”

Charles has long been known to be an environmentalist.

Much of Charles’ work as Prince of Wales has centred on protecting the natural world and tackling climate change.

Over his lifetime, Charles has often been outspoken on the need for world leaders to do more to protect the planet.