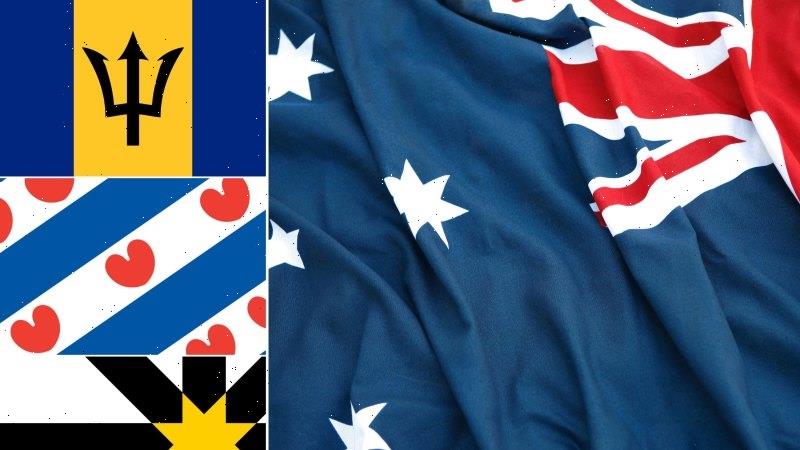 Brand Australia is championed internationally by Hugh Jackman’s wiggling bottom, the solid tail of a Qantas plane and the drone of a didgeridoo – not our flag.

Unfurl Australia’s take on the red white and blue to someone north of Cape York or west of Perth, and there’s the same level of confusion as trying to distinguish between Margot Robbie and Samara Weaving. Blame the lazy use of colours already honed by the UK, France and the US and the same lack of creativity and originality you experience walking through Zara. 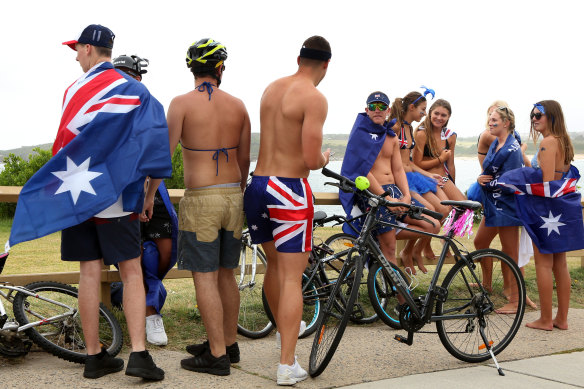 It’s time to add a touch of fashion and originality to the Australian flag, worn here by teenagers celebrating Australia Day.Credit:James Alcock

The purpose of the flag is to represent and unite our country, but with the Union Jack in prime position, Australia’s looks like a piece from Britain’s Colonial capsule collection, with New Zealand, Fiji, the Cook Islands and Anguilla included in the diffusion range.

Along with the confusing Union Jack, as common as cut-outs on the runway, there’s the problematic Southern Cross in this Frankenstein mash-up.

The Southern Cross was part of a stencil kit for all flag designers south of the equator, seemingly dragged and dropped onto the emblems of Brazil, Papua New Guinea and Samoa. The constellation also appears on the flag for the Reichskolonialbund, the Nazi organisation abolished in 1943 that sought to reclaim German colonies and has been embraced by racist right-wing groups.

Understandably, for some Australians the flag generates as many cringes as politicians saying maaaaaattte or non-Indigenous people describing a PE Nation T-shirt as ‘deadly’.

While I am a mongrel Australian with English, Irish and a splash of German blood swirling beneath my sun-damaged skin, the Aboriginal flag makes me more emotional than our current cut of cloth. I am not suggesting that we culturally appropriate Harold Thomas’s graphic black, gold and red symbol but find something equally inspiring.

Before drawing from the world’s most fashion forward flags, let’s deal with the khaki elephant in the room – the argument that many soldiers died fighting beneath our current Australian flag. While this is true and deserves respect, I believe our soldiers were fighting for the values of Australia, which have evolved since Gallipoli, Crete and Long Tan, rather than fabric.

Somehow the most polite of countries Canada risked offence in 1965, when it ditched the Union Jack, replacing it with a red maple leaf. During the Great Flag Debate, veteran members of the Royal Canadian Legion argued that soldiers died beneath the flag, but the spirit of greater inclusivity won out in time for Queen Elizabeth to authorise the change in 1965. 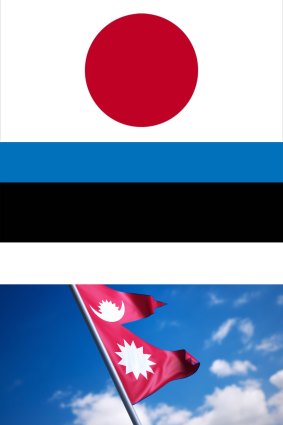 The flags of Japan, Estonia and Nepal.

There’s no need to drag the late Queen into this as we don’t need to become a republic to move forward. We can let Prince Harry’s Spare and Prince Andrew’s activities do the hard work there.

Here are the designs that should join the Aboriginal flag in offering future Australians stylish inspiration.

Dots are big this season. Huge. Louis Vuitton has released a polka dot collection of accessories with Japanese artist Yayoi Kusama that look like expensive measles.

With its white background and rising sun, the Japanese flag is easier to interpret than most Comme des Garçons shows, using minimalist design for maximum effect. The flag’s status only became official in 1999.

There’s something soothing about the blue, black and white tricolour of the Estonian flag, which became the country’s official symbol following its independence in 1918.

Blue represents the reflection of the sky, lakes and sea, black stands for the soil and white signals an aspiration towards light and purity. It’s as classic as a denim jacket with a black T-shirt and white jeans.

Break out of the rectangular box by following the lead of Nepal, the only country with an original silhouette this season.

The double pennant design unfurls easily in a slight breeze, perfect for display in our capital, as Canberra is Australia’s least windy city.

Just try looking at this flag with a trident and not picturing a dripping wet Jason Momoa from Aquaman. Sold. 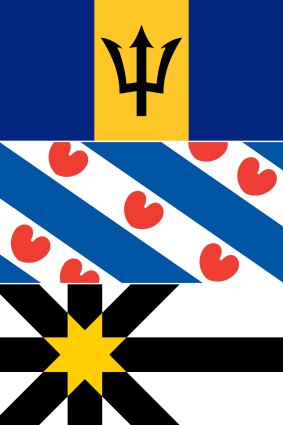 The flags of Barbados, Friesland (a province of the Netherlands) and Sutherland (a Scottish county).

In the flag deep cuts you will find this endearing emblem from Friesland, a province of the Netherlands.

The seven red blobs are not hearts but water lilies, representing medieval sea territories from the Middle Ages. Official instructions for use of the flag decree that the pompeblêdden (water lilies) must not be heart-shaped, but we still love them.

The flag was officially approved in 1897, first used by the provincial government in 1927 and can now be found on the friendliest-looking football jersey for Sportclub Heerenveen. 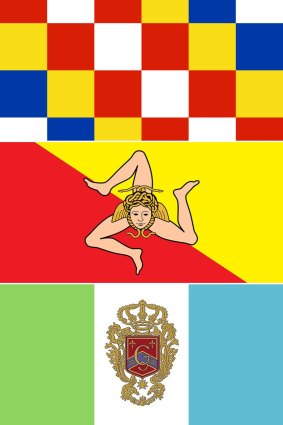 Flag facts and fiction. The flags of Antwerp, Sicily and Genovia.

After a judging panel selected a flag with communist overtones, featuring the red and gold colours associated with the Earls of Sutherland since the 12th Century and an eagle, for this Scottish county a second public vote was held.

Sticking with provinces, in 1997 Antwerp in fashion-forward Belgium adopted this cheery patchwork, reminiscent of designer Jeremy Scott’s work for Moschino. Their tricolour red, white and yellow flag was dropped because it was not immediately recognisable. Sound familiar?

Now this flag looks like a good time with its medusa head above three flailing legs. It could be used as an episode guide for the sex-positive White Lotus. Just add a pair of thongs and Australians could get on board.

There’s nothing beautiful about this lime, white and pale blue colour arrangement but people love it because it belongs to the fictional country to be ruled by Anne Hathaway’s character in The Princess Diaries. Perhaps we should ask Elvis creative Catherine Martin to whip up our next flag?

01/17/2023 Fashion Comments Off on Our copycat flag isn’t original or fashionable. Let’s pick something else
Recent Posts