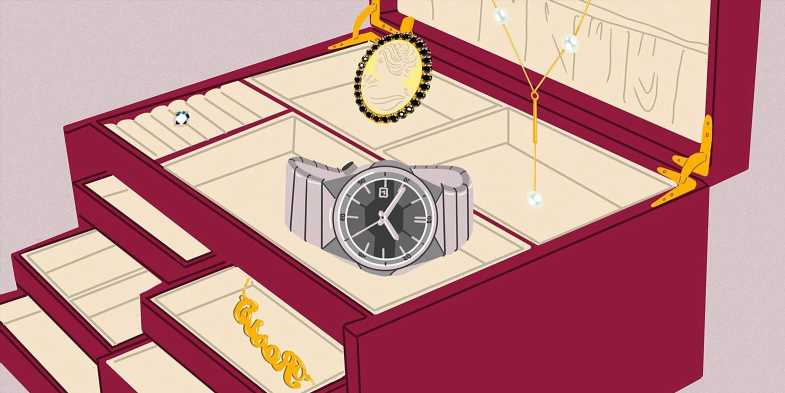 That's the new ethos of Hollywood dressing, where celebrities and stylists alike are realizing the only "sustainable" look is one already hanging in your closet. We've seen it with Angelina Jolie and her kids at the Eternals premiere, wearing reworked pieces from the movie star's own wardrobe. Earlier in Paris, Law Roach put archive Valentino on Zendaya to dazzling effect. Another of his clients, the Bling Empire breakout Jaime Xie, wore head-to-toe Balenciaga from 2007 to a recent party, sparking renewed eBay searches for the 14-year-old collection.

Meanwhile, Micaela Erlanger—the mastermind behind Lupita Nyong'o's ice blue Prada look at the Oscars—has turned her attention to resurfacing antique jewelry. She's the curator of All That Glitters, a Taubman Museum exhibit of Hollywood's most iconic gems, including pieces from Marlene Dietrich, Cole Porter, and diamonds worn first by Mae West and later by Madonna.

"If I could get them past security, I would take a lot of these pieces and put them into a modern outfit for my clients now," Erlanger says. Ironically—or not?—the necklace at the center of the Ocean's 8 heist is also included in the show.

"The thing that's so exciting about jewelry is that no matter when it's from, it's meant to be enjoyed and showcased right now. And I think people are learning to be a little less formal with their heirloom pieces, and wear them as part of their everyday lives… it's a departure from the adherence to trends," she says, "And a commitment to the fact that great style is timeless, and a part of who you are, forever."

According to Jillian Sassone, that sentiment is growing, especially with heirloom jewelry. The founder of Marrow Fine Jewelry, Jillian has revamped vintage pieces for Hilary Duff and Margot Robbie, and frequently helps clients create more modern looks from their inherited diamonds and pearls.

"There's a real exhale that happens when someone turns an 'old' piece of jewelry into something they love, that feels like them," Sassone says. "That can happen through styling or through melting it down and building it back up. Either way, there's nothing 'vintage' about wearing something your way."

Here's how, according to the experts: Both Erlanger and Sassone recommend taking just one pearl and wearing it as a lariat necklace for a simpler, more modern twist on the classic Jackie Kennedy style. "But I also love a pearl necklace with a t-shirt, leather jacket and a pair of ripped jeans. It's a great mix of the hard and the soft." And Just Like That costume designer Molly Rogers has been using pearls along with many (many, many) other strands on Sarah Jessica Parker in the Sex and the City reboot. "Layering different styles of necklaces is a modern cosmopolitan way to augment your day look and move it to night," she says. "I had a client come in with a cameo from her grandmother," says Sassone, "And she wanted to keep it recognizable, but make it much more modern. So I added some black diamonds to make it more modern and edgy, and then reworked it into a medallion piece with gold around it. I wanted it to be a real statement because a cameo is already such a distinct design." "I love a men's watch!" says Erlanger. "Mine is a vintage Rolex that does not tell the accurate date or time. And I wear it as a bracelet." For an even bigger statement piece, have a men's diving watch sized down by a jeweler, then pair it with your favorite work dress. We recommend #OldCeline navy blue sheaths (available secondhand) and heels for a Power Boss vibe. Carrie Bradshaw fans rejoice! Molly Rogers confirms, "Replacing the Carrie nameplate necklace, her signature accessory, was not going to happen… that's a classic you keep in the mix! [For the new season], we chose to switch neckwear up and combine and mix her vintage and modern pieces together." Sassone adds, "you can also have your nameplate necklace scanned by a 3-D printer and melted down, shrunken, and turned into a bracelet. It's quite cool on its own or stacked with other things, and it has a real history that you'll always love." It happens to all of us—we have two diamond studs, a gift from our Sweet 16, perhaps, or an investment for our first "big time" job. Then suddenly, there's just one stud. "The good news is, the possibilities for a spare diamond are endless," Erlanger laughs. "I had a client left with just one stud, and we turned it into a pendant, set with a diamond chain." Other fashion folk—namely the front row editors at Parisian runway shows—are often spotted with a diamond stud in their cartilage or upper ear—a true glow-up for an emo college piercing that costs nothing, looks deliberate, and proves diamonds are forever… but also very of the moment.