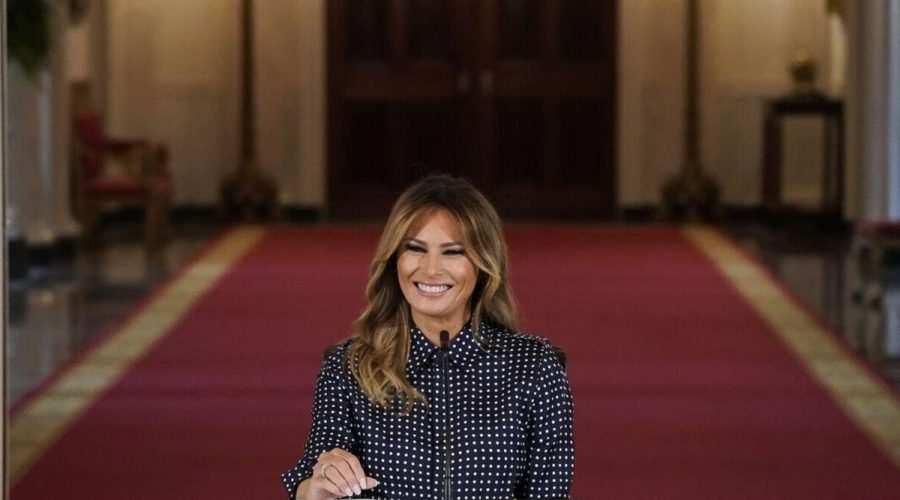 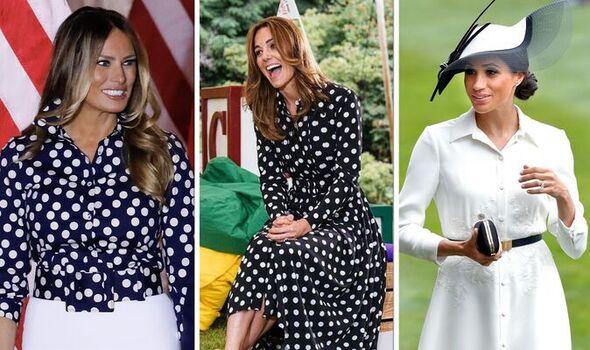 During her UK visits, Melania Trump wore very similar looks to some iconic outfits Kate, Princess of Wales, Meghan Markle, or Princess Diana have donned in the past. Some claimed the former US First Lady may have copied some royals for inspiration when it comes to her style.

In 2019, Melania met the late Queen Elizabeth and Prince Charles at Buckingham Palace. For the occasion, she donned a Dolce & Gabbana piece that recalled the white dress Meghan Markle wore to Ascot in 2018.

The following year, Melania wore a stylish polka dot dress by Gabriela Hearst to host a White House round table about returning to work after recovering from drug addiction. A couple of months before, the then Duchess of Cambridge, had worn a very similar look.

Kate chose a polka dot shirt dress by designer Emilia Wickstead to appear on a TV show about education, and the only difference was their choice of footwear.

While Kate opted for a more relaxed look by donning a pair of lace-up wedges by designer Castañer, Melania sported a pair of stilettos, which are her preference to finish her glamorous outfits.

During her trip to London in 2019, Melania also drew comparisons to past looks from Princess Diana. She met Charles and Camilla wearing a Hervé Pierre hat similar to one Princess Diana wore in the 90s.

But she has also channelled other European royals, including Queen Letizia of Spain. In 2019, Melania stunned as she wore a red caped dress to host the British royals which was almost identical to the one Queen Letizia wore two years prior.

Queen Letizia’s gown was by Stella McCartney while Melania’s was by designer Clare Waight Keller for Givenchy. Stylist Melita Latham commented on how Melania’s style changed since becoming First Lady of the US.

The expert explained: “While Melania certainly didn’t dress extravagantly previously, she certainly had style. A flair for striking gowns with just enough coverage to be classy and scream look at my figure.”

Since becoming the First Lady, she “definitely lost her glam, now replaced by military garments,” the expert claimed. Melania used to wear daring and even sexy looks for public appearances before Donald Trump became US president.

She then changed her style and moved towards more conservative looks, similar to those worn by the Royal Family. Melania carefully curated her political style and opted for tailored jackets and monochrome outfits.

Describing Melania’s style, Melita said: “Thick coats, covered cleavage, high neckline, all the tributes of what you might find in the British Royal Family.”

Gianni Casagrande, digital marketing manager at Moda in Pelle, commented: “We’ve seen a distinct change in Melania’s style since Trump was inaugurated in early 2017, though the transformation began much earlier.

“Donald’s bid for political office began way back in 2000. Since then Melania’s style has been moving away from a fun-loving party girl to a serious political figure, but still keeping to a few of her signature features.

“For example, form-fitting materials, bright colours and glamorous accessories. Melania is a fan of bold colours and tailoring, and isn’t afraid to stand out and wear something eye-catching,” he continued.

“Melania’s style choices demonstrate that she isn’t someone happy to fade into the background and that she is confident in her position.

“She is not afraid to strike a balance between elegant and sexy, always pairing any outfit with smouldering eye make-up and glamorous waves.”

The mother-of-one has often channelled the style of First Ladies before her. Gianni said: “When Melania first became involved in the political world it’s clear she went straight for the conservative elegance of predecessors like Jackie O.

“Her style is certainly more conservative and elegant. She favours designers including Dolce & Gabbana, Roksanda Ilincic and Ralph Lauren. But she still often goes for an off-the-shoulder look or a thigh split, giving a nod to her previous wardrobe.”