This isn’t Lady Gaga’s first Golden Globes rodeo but it very likely will go down as one of her very best. Lady Gaga’s 2019 Golden Globes dress was fabulous because of course it was. Gaga matched her hair to her dress and both were a gorgeous shade of purple. It was this pretty, pastel, and lavender x blue hue that was about as jaw-dropping as you would expect. Only Gaga could wear a dress that matched her hair at a black-tie event such as this.

However, just like Gaga’s 2016 Golden Globes ensemble took its influence from the classic glam of the one and only Marilyn Monroe, this year’s look had its own source of Old Hollywood inspo.

Her voluminous, strapless, and Cinderella-like dress had a shawl and it was reminiscent of Judy Garland’s dress from the 1954 version of A Star Is Born. It was certainly a modern update of that gown.

Gaga is nominated for Best Actress in a Film — Drama and for Best Song for her universally acclaimed work in the remake of A Star Is Born. So therein lies the powerful sartorial connection.

Remember, Gaga won a Golden Globe for Best Actress in A Limited Series for her work in American Horror Story: Hotel a few years back. But this year, it’s all about her movie star-making turn the titular character in A Star Is Born. 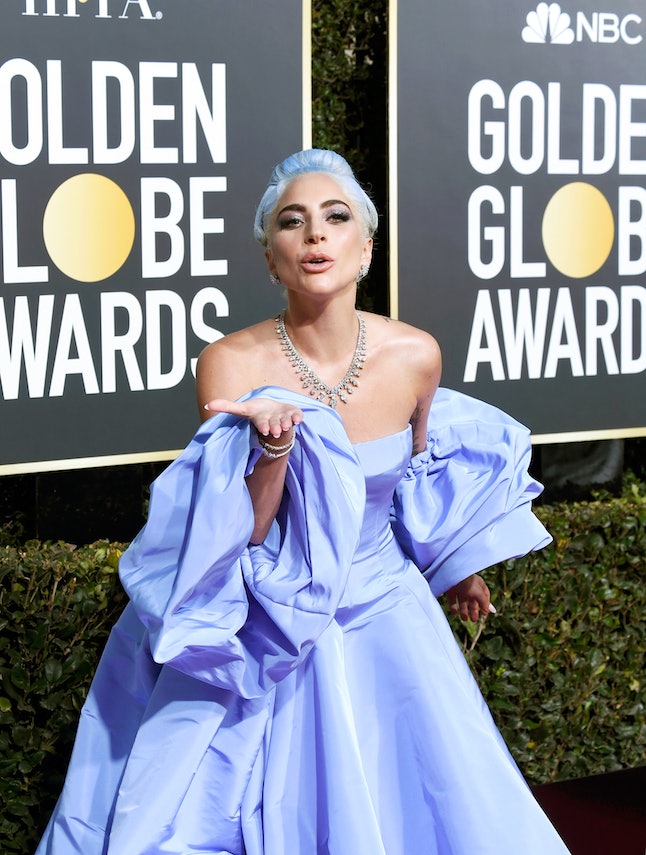 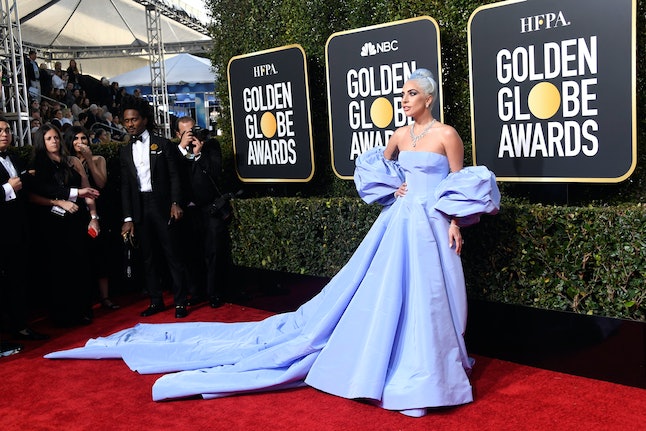 And this is the dress in all of its glory.

It had its own drama. 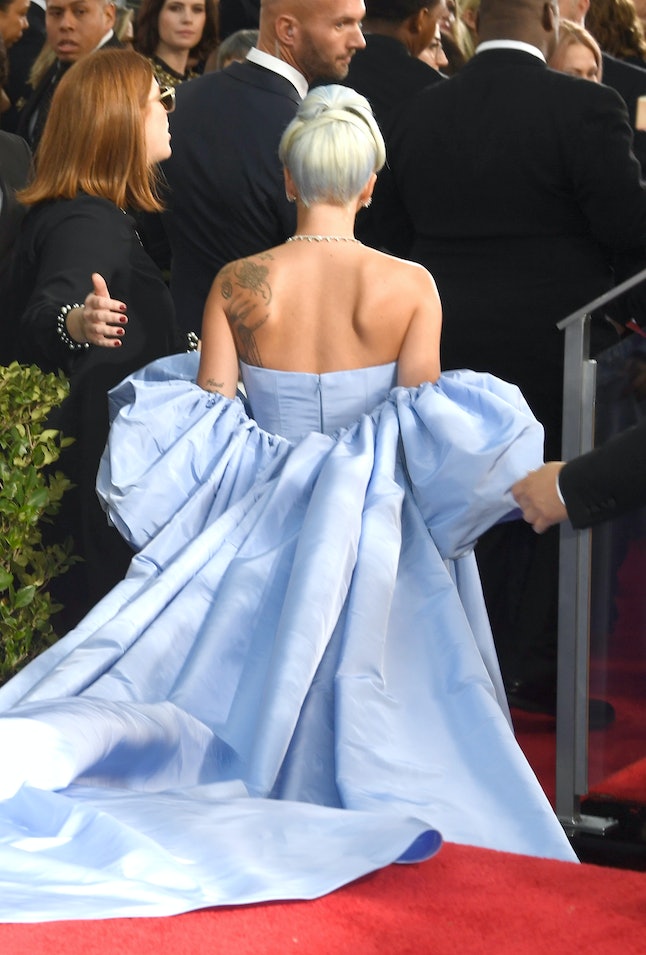 While Gaga has been earning rave reviews for her portrayal of Ally in the film, many of her fans and fashion followers have marveled at how Gaga stripped down her look and became more "real" in the role. It wasn’t about being outrageous or dramatic with her sartorial choices. It was about truly embodying the character. 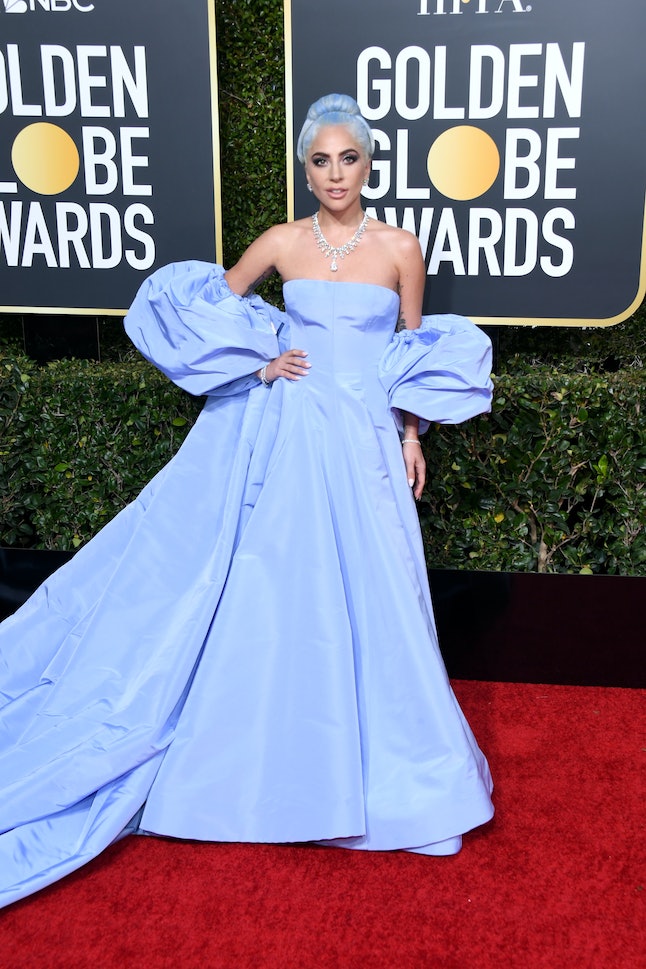 But she is celebrating the accolades with a very Gaga-like ensemble. Gaga is known for things like her meat dresses, hair bows, and towering high heels. Jeans, sneakers, and the concept of dressing down weren’t a part of her fashion vocabulary earlier in this decade. They were with Ally, though.

However, Gaga was very, well, "Gaga" at the 2019 Golden Globes ceremony. 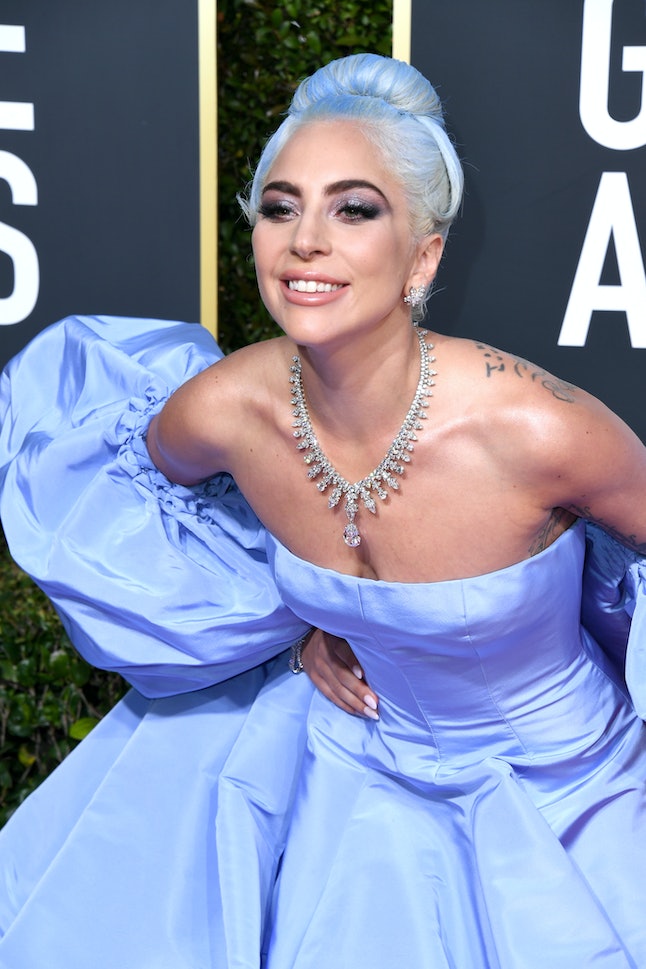 Her ensemble was poufy and pretty — with all of the requisite drama you’d expect from Gaga along with respect for the legend who played the part before her. It was what we expected from the singer and fashion’s favorite "plays by her own rules" star. 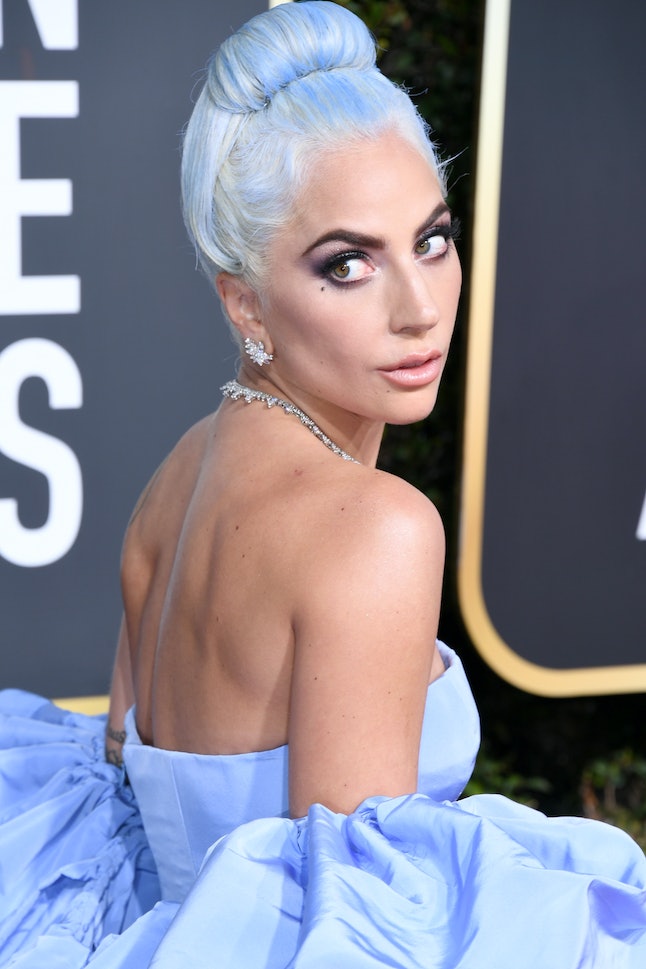 Gaga’s hair was elegant. She wore it swept off her face in a tight, tinted bun. Her makeup featured a smoky eye and pale pink lips. That way, nothing competed with the color of her dress and her hair. Except maybe that statement diamond necklace. 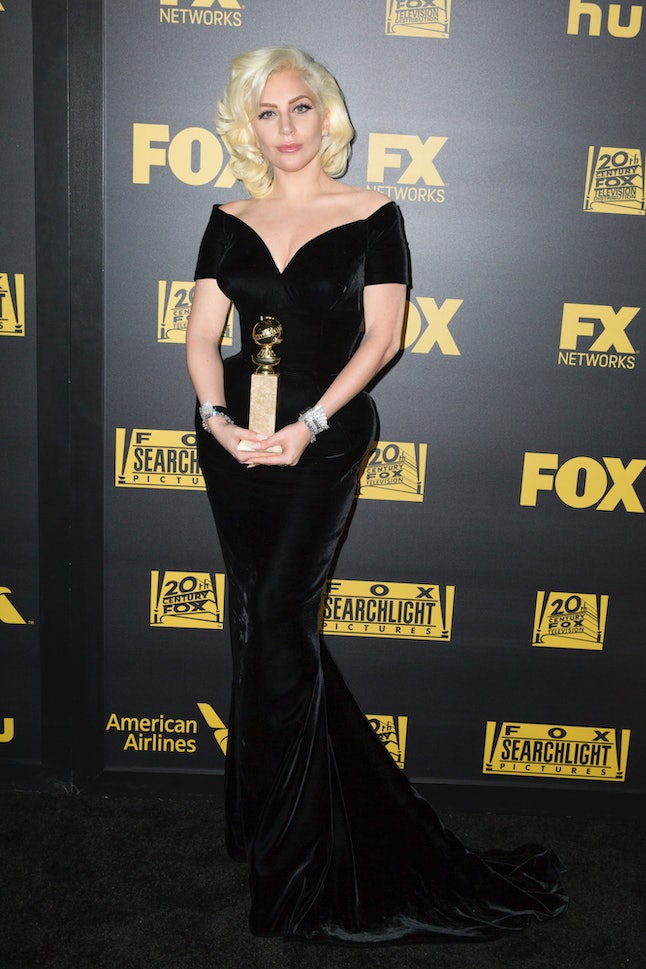 Flashback to the 2016 Golden Globes. Stefani Joanne Angelina Germanotta was classic and Old Hollywood AF with her entire look. She opted for platinum blonde waves and a "no makeup" makeup look, anchored by a nude lip. She gave off all of the Marilyn vibes. 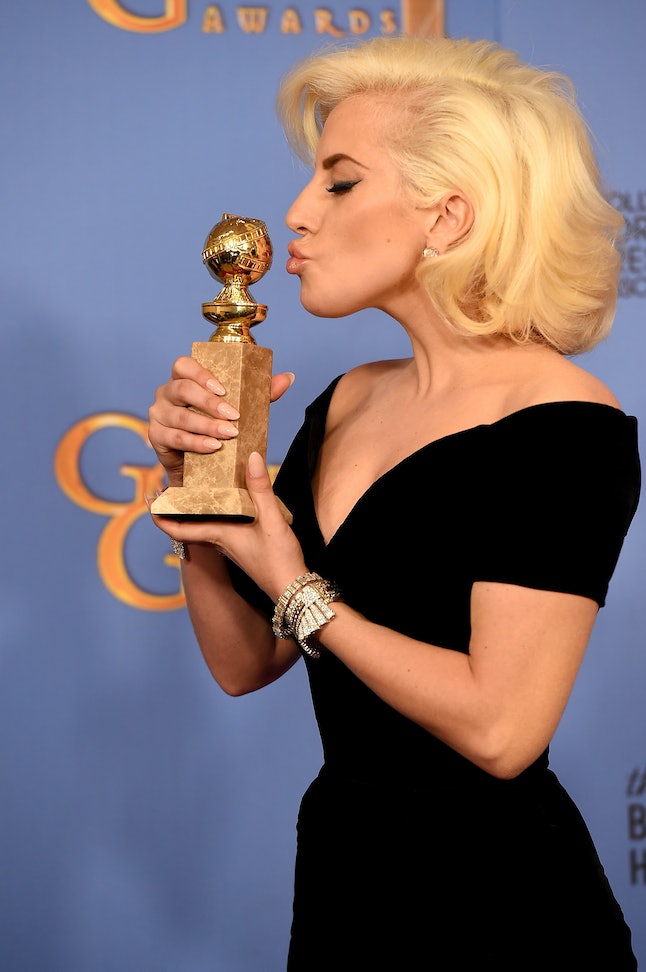 Her off-the-shoulder, short-sleeved, and curve-hugging black velvet dress was custom Atelier Versace. It was a total Marilyn Monroe presentation. It was also incredibly tame by Gaga’s fashion standards. But it worked for her on EVERY single level.

Her 2016 and 2019 looks were totally different from a style perspective. However, they were of the same spirit in their reverence for Hollywood icons.