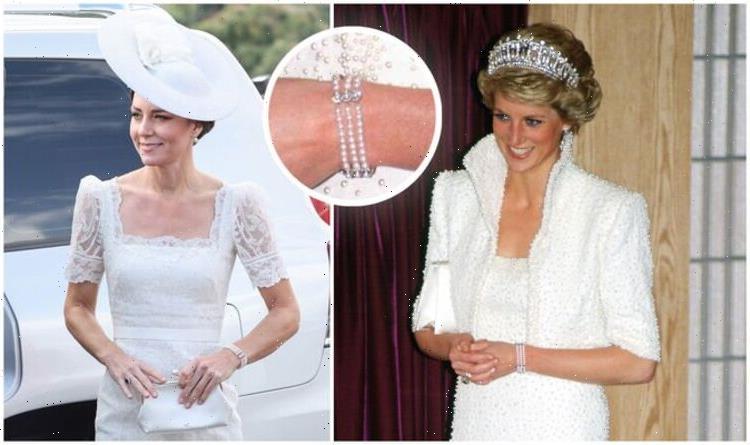 The Duchess of Cambridge, 40, has stepped out in the Jamaican sun with her husband Prince William, 39. The Duke and Duchess attended a military passing out parade in the nation’s capital, Kingston. Kate opted for a white Alexander McQueen dress for the event.

The garment featured short sleeves, a square-shaped neckline, and a mid-length skirt.

It was covered in lace and cinched in at the waist.

But how did she pay homage to Diana, Princess of Wales?

Kate wore her pearl bracelet that used to belong to the late Princess.

The bracelet was passed onto Prince William after his mother died and now belongs to the Duchess.

This is not the first time Kate has worn the iconic piece, as she wore it in 2017 whilst visiting Germany, and many times since.

The bracelet was famously worn by Diana in 1989.

The royal teamed it with a tiara and her iconic white Catherine Walker ‘Elvis’ dress during an official engagement in Hong Kong.

Twitter user @LanaPear said: “What a perfect moment to wear it, during the Jubilee year and on tour.”

Kate paired this with white stiletto heels and a white Philip Treacy hat.

Today, Kate completed her all-white look with a pair of pearl earrings.

The Duchess’ hair was swept back in a low bun and her make-up was natural-looking.

Her thick eyebrows were heavily pencilled, and she wore black lashings of mascara. Her lips were a pinkish nude.

Meanwhile, Prince William wore the tropical Number One uniform of the Blues and Royals for the first time.

This is a white shirt decorated with military adornment and a black and red pair of trousers. His hat was also black and red.

After stepping out of the car in Kingston, the Duke of Cambridge then took the royal salute and took his place as the reviewing officer for the parade.

The parade was the inaugural parade for service personnel from across the Caribbean who have recently completed the Caribbean Military Academy’s Officer Training Programme.