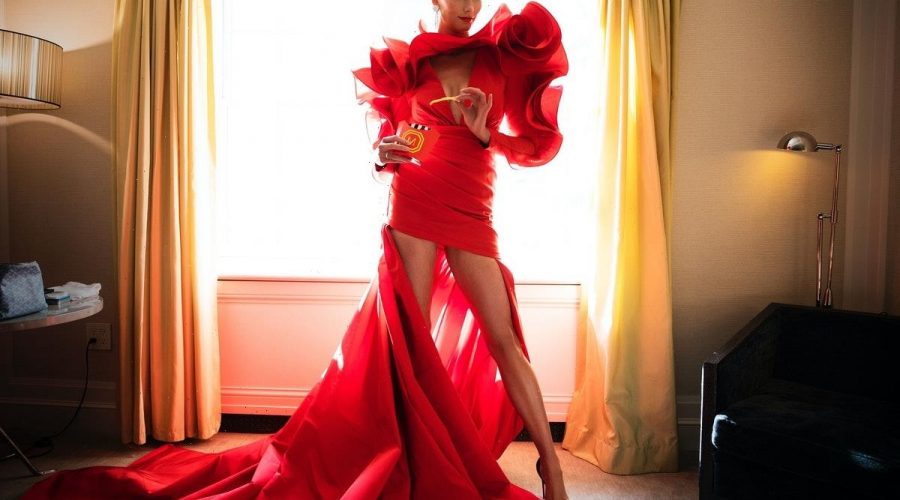 Hours before she was due to walk the red carpet at the 2021 Met Gala, Karlie Kloss stood at the window of her hotel room at The Mark in New York City taking pictures of the crush of fans stationed outside. They were waiting for her, along with the other attendees getting ready on the Upper East Side, to emerge from double doors out front and load into black SUVs on their way to the steps of the Metropolitan Museum of Art. Surely none of the onlookers were ready for Kloss, who donned a show-stopping crimson Carolina Herrera dress custom made by the label’s designer Wes Gordon, who collaborated with Kloss on the piece. Its dramatic, 1980s-inspired sleeves were an homage to the house’s founder, Carolina Herrera, and the entire dress was made from 25 yards of silk. And when Kloss walked onto the street, there were audible gasps and cheers from the crowd.

Gordon—who stuck a rose in his lapel to match the blossoming silk faille roses affixed to both of Kloss’s shoulders—told Emma Chamberlain, who was doing on-camera interviews at the Met, that he was on “train duty tonight.” Kloss, for her part, said she was glad to be wearing such a chic look after “staying at home in sweatpants for a year-and-a-half.” Below, follow Kloss’s process getting ready for this year’s Met Gala—which included wrangling a nine-foot train, with some help from Gordon.

“This work of art was inspired by America’s flower, the rose. It was an honor to work with Wes Gordon and the Carolina Herrera atelier. This dress feels equal parts iconic and elegant.”

In the hair and makeup chair.

“No thorns, all rose tonight.”

“Pro tip: book a room on a lower floor so you can take the stairs.”

“I’ve loved this event since I had the honor of first attending in 2009. Twelve years later, and the magic of Met never fails to amaze me.”

“Creating with you has been a dream, Wes. I’m so lucky to have you as my date tonight (and really, whenever and wherever)!”