Just past the entrance of the Oregon Country Fair, a three-day summer festival held in Veneta, Ore., elaborately costumed fairgoers — half-clothed dragons, fairies and clowns — crowded narrow alleys. A family of stilt walkers playing violins and dressed in Renaissance garb nearly careened into passers-by. At “Fair,” improv abounds and those without scheduled acts make stages out of shady groves.

“I love the community here and how people in society that can't do what they want to do, just because of societies thoughts, can do it here,” said Gabrien Warren, 10, who drew a crowd as a tap-dancing unicorn in a sequin dress.

This summer 45,000 people made the pilgrimage to the 49th annual gathering, which attracts a multigenerational community of artisans, performers, and new age hippies, many of whom spend months preparing their costumes and craft. Fair draws on the eccentric aesthetics and ideology of the 60s and 70s — think Woodstock, or Burning Man without the tech crowd. As the festival expands, Fair community must reconcile it's countercultural identity with the increasing commodification of hippie ethos and critiques of cultural appropriation. 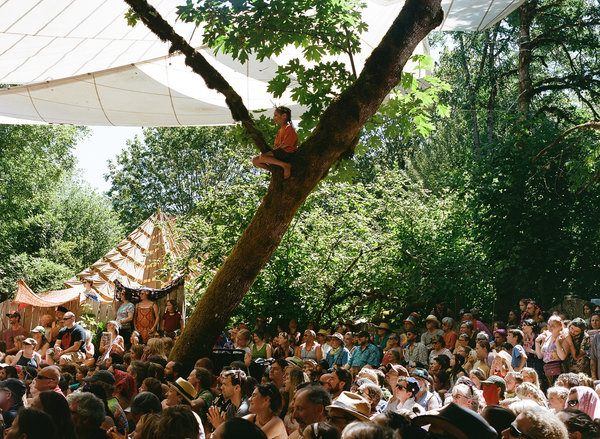 On stages throughout the festival, programming ranged from educational events, including a lecture about sexual consent, to acrobatic and musical performances. Sinuous footpaths led past stages, booths, and villages with names like Altered Space. I set off down the dirt paths in the hopes of finding Community Village, but quickly became distracted by vendors peddling late-capitalist salvation: healing crystals, hemp yoga pants and bottles of rejuvenating face spray labeled “swamp water.” My prior visits to the gathering, as a teenager in Portland, Ore., taught me that part of the experience is getting lost. I soon found myself in the tent of a Tarot-card reader who offered their services for a dollar per minute.

Under a sparse canopy of trees, Rose G., 18 — deemed a “Fair Kid” for having attended since age 3 — swung her hula hoop in a vertiginous orbit. This year she came without her parents. “I grew up here, these are all my people, and nowhere feels like home like here does,” she said. One of her favorite acts at the festival thus far had been a lecture from the Psilocybin Service Initiative of Oregon pushing to legalize and regulate the use of hallucinogenic mushrooms. (No alcohol or drugs are sold or permitted at Fair.) I asked Rose how her experience had changed since she was younger. “I mean, I’m on psychedelics now,” she said.

By early afternoon, a line had formed around the stand operated by Springfield Creamery, a company from nearby Eugene, Ore., that was crucial in the gathering’s nascent years. Sheryl Kesey Thompson, the company’s 56-year-old owner, inherited the creamery, and its booth at the gathering, from her parents. As she made ice cream, she recalled her first Fair decades ago, when she was accompanied by her uncle Ken Kesey, the author of “One Flew Over the Cuckoo’s Nest” and a member of the countercultural group the Merry Pranksters.

In the early 1970s, when the creamery was struggling financially, Kesey asked his friends in the Grateful Dead to play a benefit concert. The show, called “Sunshine Daydream,” took place near the fairgrounds on a hot day in 1972 and quickly became the stuff of legend. A decade later, when the band returned, the concert was lucrative enough for the Oregon Country Fair to make a down payment on the current property.

The gathering began as a craft fair to raise money for a Waldorf School, (a string of elementary schools that use a pedagogical method that emphasizes creativity) and until 1977 was called the Oregon Renaissance Faire, a title less likely to be confused with a county fair and true to the festival’s Boschian optics. Over the years, the biggest challenge facing the festival operations committee has been accommodating growing crowds. “The great part is things don’t change,” Thompson told me. “It’s your same people.”

Roger, a 67-year-old who says he has no last name, is one of the people Thompson sees each year. When I met him, in a wooded meadow called Energy Park, he was peddling his handmade scroll saw. Roger is a few years away from gaining “Elder” status, which is reserved for people who have worked at Fair in some capacity for over 20 years and who are above the age of 55. He hopes that there will soon be a tiny village just for Fair Elders. He said that many of the Elders were so devoted to the festival that they would have their ashes spread on its grounds: “For a lot of people that’s important — they’ve been here for a long time.”

Environmental sustainability is an axiom of Fair. A large banner reads, “Reverence for the Land.” The fairgrounds are considered an archaeological wetland, where cutting and digging are prohibited. The gathering features a reusable diaper service, and food booths use metal utensils.

Later I tried to discard the remnants of my Springfield Creamery vegan ice cream in the trash and was reprimanded by a waste kiosk supervisor perched on a recycling bin, a teenage girl who was wearing wings and sparkle eye shadow.

When I asked Roger (who has driven an electric car to the gathering for the past two decades) about Fair’s environmentally inclined values, he said: “Who are we kidding? There are a gazillion cars out there. It’s a gasoholics convention.”

Despite Fair’s ragtag appearance, it is a nonprofit run by a 12-person board that creates a handful of committees. The gathering maintains the aesthetics of liberation but runs with an operational slickness that is both impressive and unnerving: While waiting in line for Indian food, I saw a small surveillance camera in the folds of a dangling tetragonal lantern.

People kept telling me that real Fair is experienced after dark, and only by staff members. To participate in the festival, performers and vendors undergo a competitive application process. Volunteers are all grandfathered in. Staff members camp inside the fairgrounds, in clearings behind the vendor's booths. Everyone else stakes tents at designated sites beyond the gates. On Craigslist, last-minute camping passes sold for $500 apiece.

Normal festival hours are 11 in the morning until 7 at night. Each year there is a much anticipated midnight show. Shortly after close, “the sweep” begins — festival staff members join hands to form a line that stretches the width of Fair. The line combs the grounds, expunging anyone who isn’t a volunteer or performer. Some daytime fairgoers will do nearly anything to stay for the after-closing fun, including hiding in outhouses.

On the second day, Risk of Change, a theater troupe, teamed up with the L.G.B.T.Q. booth and marched through Fair in the dusty pinks and blues of the transgender pride flag, with wigs that looked as if they were from a Dr. Seuss book. Earlier the group was dressed as "Ru-pollinators" pulling from RuPaul (the drag icon) and flower iconography. Parading in coordinated costumes, the queer-led coterie used the volatile nature of performance to instigate conversations about inclusion. Wayne Bund, 37, told me he often uses the refrain: “There are a lot of people who feel comfortable in the traditions of Fair, and change has this risk of making things different.”

I met Wren Davidson, 70, seated in a camping chair, framed by her paintings. She said, “For a lot of us, this is our Easter, Christmas, Valentine.” Having operated this booth for 37 years, she is privy to Fair traditions and drama. She recounted the controversy of the “story pole,” a totem-like structure that community members had spent a few years carving, but it ultimately was not erected. Davidson recounted critiques of cultural appropriation that had been voiced from some members within and outside of Fair community. She asked though: “Does that mean all of our moccasin makers, our basket makers, our weavers? I mean, where does cultural appropriation begin and end?”

There was no end in sight of white people donning and selling the attire of minorities, some wearing dreads, others selling saris or moccasins. Little mention is made to the Kalapuya peoples, who formerly lived on this land and who still live in the greater Eugene area.

Overwhelmed and slightly heat sick, I searched for a place of respite. The yurt at the end of Community Village was covered in rugs. People sat in a circle, eyes closed, on meditation cushions. Shoes remained at the entrance so the smell of sweat and feet filled the darkened yurt. I’d entered a feelings workshop. We were told to partner up and really “let ourselves be seen.” In silence I held the slippery hands of an older man, whose gaze was gentle and steady. I had to remind myself to maintain eye contact and breathe.

Back in the afternoon light, Fair seemed to slow. In a field some people juggled while others sprawled sunburned and exhausted. Two teenagers, Aminta Skye and Rowan Brown, shared a carton of fries. I recognized Skye from earlier, when she performed an acoustic set on Youth Stage. Skye and Brown, who are both Fair kids, reflected on this year’s gathering. Brown felt disillusioned with the festival’s financial inaccessibility. “I saved up $100 to come here, but I couldn’t really buy anything,” she said. Skye said: “Growing up has exposed a lot of aspects of fairgoers I may not have seen. The hippie movement was not forefronted by people of color.”

As we talked, a white preteen crawled over to us and began to eat Skye’s fries. “I feel bad not to make him ask,” she said, and joked that the children at Fair were “free range.” After the fries were gone, he went for her soda. “I’m sorry,” she said, moving it gently out of his reach, “I’m not going to share this.”

Fairgoers packed their belongings and moved toward the exit. Members of “the sweep” gathered across the field, discarding costumes for security T-shirts. Skye turned to the small fry stealer. “Does your dad know where you are?”